Venerable network reports Bergdahl converted to Islam and became a terrorist, based on comically thin sourcing 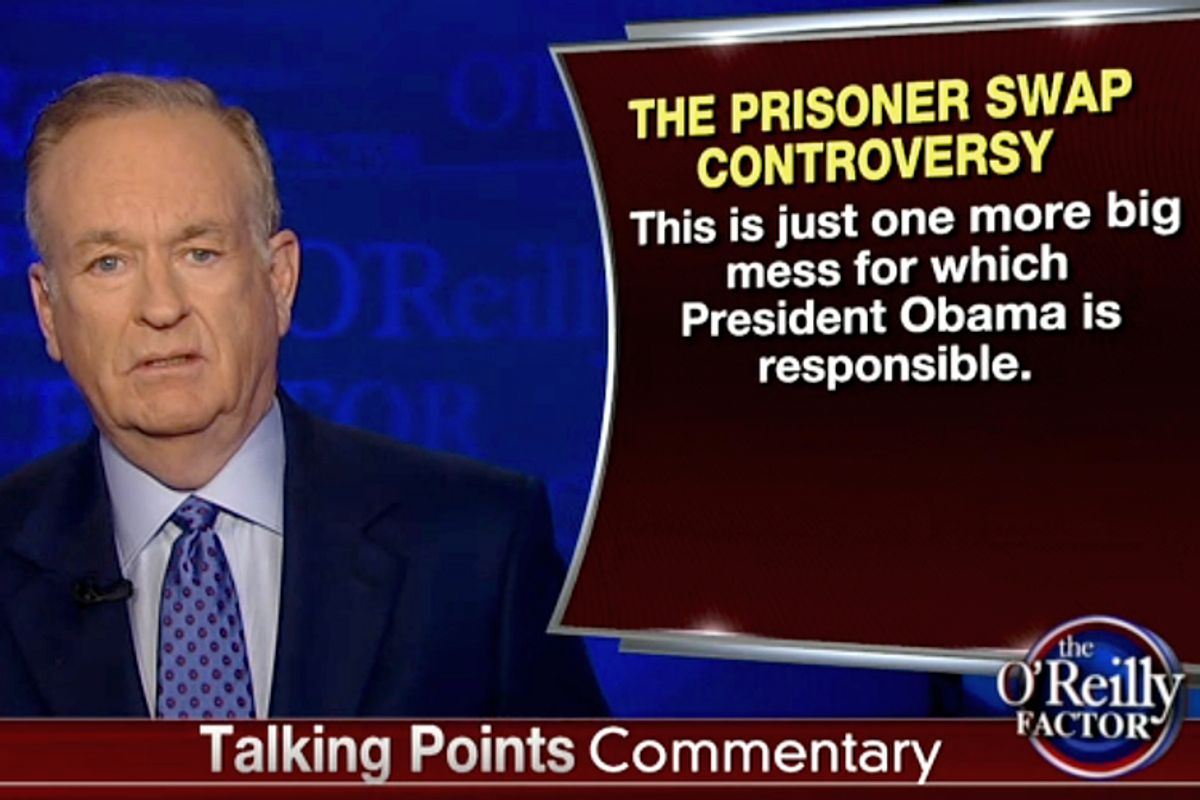 The years-long realignment of national security politics and the visceral conservative opposition to everything Barack Obama touches reached a dramatic confluence with the news that Sgt. Bowe Bergdahl, for years a prisoner of the Taliban, had been released in exchange for five Guantánamo Bay prisoners. Conservatives, once self-appointed wardens of the honor of “the troops,” rushed to tear down Bergdahl and question the price paid for (or the merit of) a POW’s freedom. He was a deserter, he’s anti-American, and his father, per Bill O’Reilly, “looks like a Muslim.”

And now, Fox News’ James Rosen has uncovered an EXCLUSIVE scoop that Bergdahl himself is a Muslim and a terrorist. In reporting out this bombshell story, Rosen broke new ground in hilariously thin sourcing.

U.S. Army Sgt. Bowe Bergdahl at one point during his captivity converted to Islam, fraternized openly with his captors and declared himself a "mujahid," or warrior for Islam, according to secret documents prepared on the basis of a purported eyewitness account and obtained by Fox News.

I can offer a quick translation here: Fox News is reporting that the freed American POW is actually a secret terrorist, according to a report based on a report based on the testimony of someone who was there, maybe.

But it gets worse … so much worse. Rosen gave some more details about the source of this obviously credible piece of intelligence:

These real-time dispatches were generated by the Eclipse Group, a shadowy private firm of former intelligence officers and operatives that has subcontracted with the Defense Department and prominent corporations to deliver granular intelligence on terrorist activities and other security-related topics, often from challenging environments in far-flung corners of the globe.

The group is run by Duane R. ("Dewey") Clarridge, a former senior operations officer for the Central Intelligence Agency in the 1980s best known for having been indicted for lying to Congress about his role in the tangled set of events that became known as the Iran-Contra scandal. He was pardoned by the first President Bush in December 1992 while on trial.

I mean, when your source is a “shadowy” group of operatives headed up by a guy whose claim to fame is lying to Congress on national security issues, maybe try and track down a confirming source before hitting “publish.”

But let’s say Rosen is correct. Let’s ignore the comically bad sourcing and the on-the-record denial he obtained from the former commander of CENTCOM, and speculate that at some point, a witness to Bergdahl’s captivity did indeed see him “convert” and declare war on the U.S. That still doesn’t necessarily mean anything.

The POW experience sometimes entails being forced to say and do things you otherwise wouldn’t in the service of enemy propaganda. The crew of the USS Pueblo, captured by North Korea in 1968, signed confessions and participated in staged press conferences because they were tortured and threatened with execution. Is it possible that the Taliban would force Bergdahl to “convert” and declare war on his own country? Sure. They’re the Taliban. They’re assholes.

It may also be the case, as Rosen’s report briefly acknowledges, that Bergdhal “simply feigned allegiance in order to survive.”

Again, this is all purely speculative, but that’s the point. We don’t know. Fox News doesn’t know. The whole situation is shrouded in uncertainty. All they have is an unconfirmed third-hand report compiled by some sketchy mercenaries. And if it turns out that Bergdahl was forced to "convert" and swear allegiance by his captors, then Fox News and every conservative outlet that seized on the story can proudly say they were complicit in spreading Taliban propaganda.