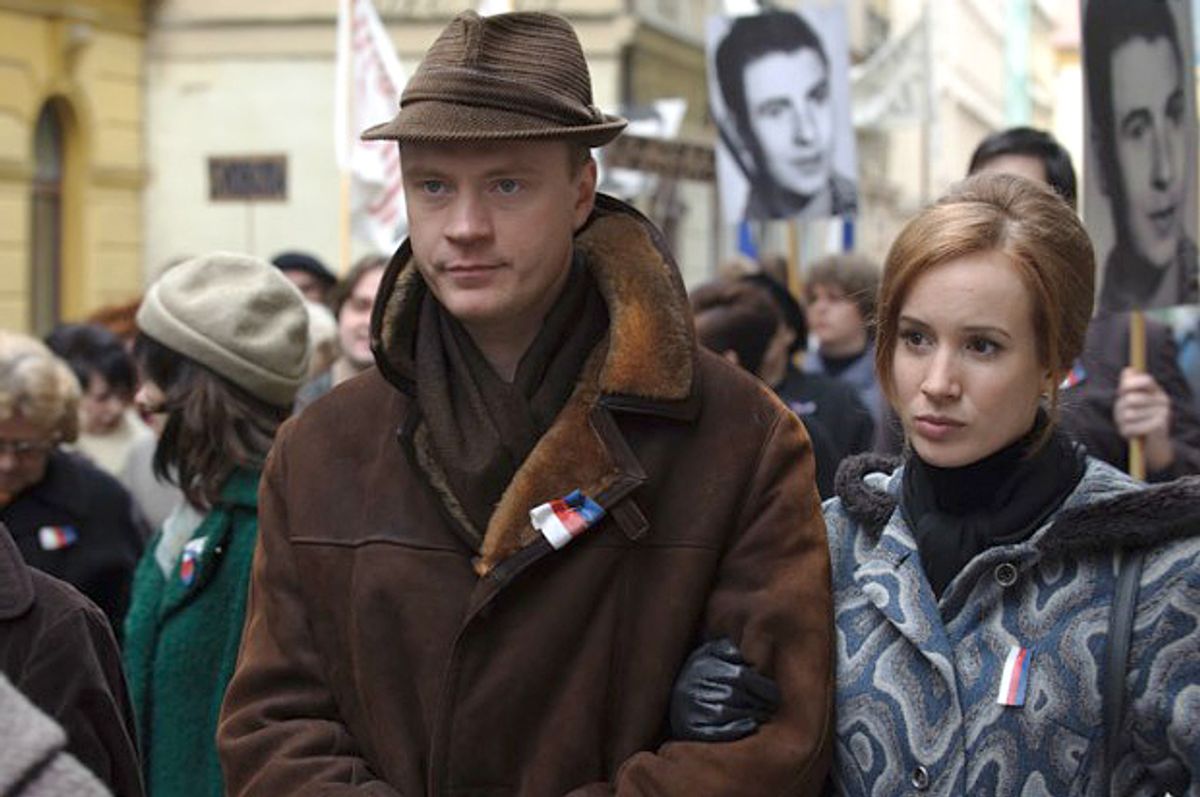 On a freezing January day in 1969, a 20-year-old college student named Jan Palach set himself on fire in Wenceslas Square in the heart of Prague, a startling act that sent ripples throughout the Soviet bloc and around the world. To the Czech public, Palach’s self-immolation was an obvious act of symbolic resistance in a nation under military occupation, where Red Army tanks had put an end to the Prague Spring democratization movement a few months earlier. In Polish director Agnieszka Holland’s densely textured three-part historical miniseries “Burning Bush” – the biggest and most ambitious yet produced for HBO Europe – Palach’s suicide means many things to many people, and presents itself (to use contemporary jargon) as a key inflection point in modern European history. (“Burning Bush” will have a limited theatrical release in this country, and is also available from the streaming service Fandor.)

“Burning Bush” really isn’t intended for American viewers, and you may need to do a little homework or scramble to keep up. Generally speaking, it’s highly worth it. For that matter, most of the European audience probably doesn’t remember the Prague Spring or its aftermath, and has fairly dim ideas about life in the divided continent of the Cold War era. If Holland and writer Stepan Hulik have an ideological goal, it might be to move past stale caricatures about the age of “state socialism,” which was never a closed or monolithic system, and often functioned quite differently in the Soviet Union and in its satellite nations. Yes, Russian soldiers and tanks were in the streets of Prague in 1969, and the movement toward democracy had been quashed. But a large-scale student resistance was tolerated, and opposition newspapers were still free to publish as they wished. As we see in the historical footage Holland weaves in here and there, Palach’s funeral became an enormous street protest, probably the biggest collective act of resistance in the Eastern bloc between 1945 and 1989.

Holland is the perfect director for this assignment on several levels: She excels at historical drama, including the Oscar-nominated Holocaust-era films “Europa Europa” and “In Darkness,” and has also directed for HBO on this side of the pond (three episodes of “The Wire” and five of “Treme”). Although she’s from Poland, Holland was actually a film student in Prague in 1969, and was exactly the same age as Jan Palach. All that adds up to the fact that “Burning Bush” is one of the richest works of her long and distinguished career, a multilayered, morally complex drama full of humor, tragedy, political thoughtfulness and sharply observed detail. Its central character is a real person (I believe still living), a fast-rising, fast-talking female lawyer named Dagmar Buresová (Tatiana Pauhofová) whose comfortable existence near the heart of the Czechoslovak state is thrown into doubt by the Palach case and its ramifications.

Around Dagmar flow various other currents of a society that’s being pulled in many directions at once. While young student activists like Ondrej (Vojtech Kotek) see the Palach case as an opportunity to push toward a general strike that might cripple the pro-Soviet regime, older Czechs take a more realistic view. Jires (Ivan Trojan), a veteran Prague police detective assigned to discover whether Palach belonged to some unknown underground network (his suicide note threatened more “human torches”), is in some ways the series’ most complicated character. On one level, Jires is the paradigmatic honest cop in a dishonest system, surrounded by corruption and toadying, who believes – not without reason – that openly confronting the regime will only bring Moscow’s boot down harder. Like everyone else in “Burning Bush,” he will ultimately be forced to choose between imperfect options, in a situation that is certain not to end well.

If Jan Palach became an important symbol – and is still revered in Czech society to this day – Holland and Hulik want to make a similar case for his mother (Jaroslava Pokorná), an ordinary woman who ran the concession stand at a small-town train station. Communist apparatchiks veer back and forth between wanting to depict Palach as a lone nut or as the dupe of a vicious right-wing conspiracy; when they settle on the latter course, his mother takes the extraordinary, perhaps unprecedented, step of suing a leading party official for libel. It’s not even clear that Mrs. Palachová intends her lawsuit to lay bare the hypocrisy of the Communist state, in which the nominal rule of law is capriciously enforced and self-evidently does not apply to everyone. (I know what you’re thinking: Which makes it different from our society how, exactly?)

Holland precisely captures the slightly dowdy atmosphere of the Soviet bloc in the late ‘60s without overselling it, and the whole series is loaded with the kinds of telling personal moments that make it an HBO event: Dagmar flirting with an aged party official in a rural hotel (where everything on the menu is crossed off except for meatloaf) and deciding whether to have a fling with her smitten younger assistant; Mrs. Palachová learning of her son’s death from a newspaper article during a train ride to visit him; Jires arresting a group of leafletters and deciding, on the spur of the moment, to let them go. “Burning Bush” is a story about a particular turning point in distant but recent history, but also one that reflects on the moral choices of our time, on the Arab Spring and Europe after communism and the propaganda uses of words like “democracy.” And perhaps most of all that we’re kidding ourselves whenever we claim that doing the right thing is either easy or obvious.