Why can't two actors do the movie circuit without a dumb "bet" routine? 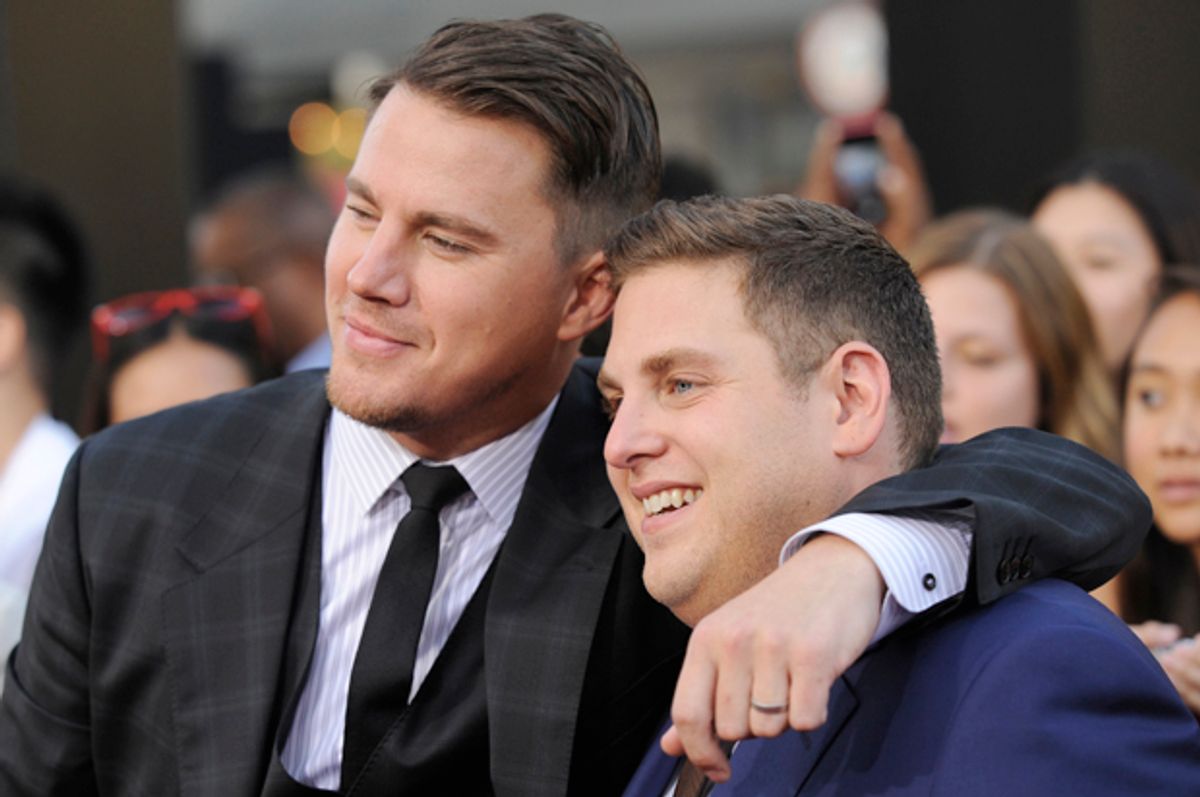 Here's what you don't want while you're still trying to do damage control for that whole outburst at a paparazzo thing: Have an old bet involving penis kissing rear its, well, ugly head.

Just last week Jonah Hill was doing a well-executed mea culpa dance after telling a lensman who was tailing him to "Suck my dick, faggot." He later admitted, "Words have weight and meaning, and the word I chose was grotesque." So anyway, now that a few days have passed and speaking of that particular activity, Hill and his "22 Jump Street" costar Channing Tatum have basically spent this week explaining why Hill has yet to place his lips on Tatum's nether regions. Earlier this month in GQ, Tatum first revealed that way back in the less enlightened era of 2012, he had predicted an especially glorious opening weekend for "21 Jump Street." But Hill, skeptical, vowed, "I will kiss your tip! I will kiss the tip of your dick through your underwear if we make $35 million." And then it made $36 million. Maybe I've just seen too much in my time, but I think just the tip and through underwear is what we call getting off lightly. Nevertheless Tatum assured GQ that "I haven't made him do it yet. For obvious reasons. That's a bad bet to lose—it's not too good to win, either. But definitely the shame of it would be enjoyable. It's my trump card, for sure. He tries not to bring it up at all costs. Unless he did something horrible to me, I don't know if I could ever cash it in. It would change our relationship forever." See it's funny because it involves man on man sexual humiliation.

And now the tale of that still unconsummated penis kiss has been seized upon as the only thing to talk about as the two stars do their promiscuous publicity rounds. When Hill and Tatum appeared on "Conan" Monday, the host asked about it -- and Hill wisely deflected responding. He clearly knows to stay away from the mouth-to-penis topic for a while, though he couldn't help emphasizing that the entire transaction was to take place "over the boxers." Most pertinent question of the night came from Andy Richter, who asked Tatum, "And so if you lost, you just wouldn't get your penis kissed?" Then "Chelsea Lately" this week referred to their "outrageous bet," with Tatum explaining, "I can't collect on it ... If I had a vagina maybe I'd have collected on it." Handler, to her credit, gently explained to Tatum that then "It'd have been a totally different bet," leading poor befuddled Tatum to ponder the next "Jump Street" and muse, "Maybe I will be a woman in the next one and he can kiss my …" Projected date for either actor ever not hearing about Hill's mouth on Tatum's junk? Never. And by the way, if you're looking for a version of this, behold former "Scrubs" costars Zach Braff and Donald Faison, who on a Reddit AMA joked earlier this year about Faison's anus, aka "man pussy," and last week reprised their "nothing gay about it in our eyes" duet "Guy Love."

All of this bromophobic, har har har NO HOMO business – not merely on the part of Tatum and Hill but the incessant usage of it as a hilarious, outrageous talk show bit -- isn't just depressing and backward, though it's that. It's plain unnecessary. Contrast our two buddy costars, for instance, with the Greatest Friends In the World and HOMIES FOREVER – Patrick Stewart and Ian McKellen. The costars and pals have a better social media footprint of their adventures than anybody – posing for adorable selfies, tweeting familiarly at each other and eating hot dogs together. Last year, Sir Ian even officiated at Sir Patrick's wedding. See? Easy. Affectionate. Unafraid and not douchey.

Maybe it's easier to not make dumb gay jokes when one member of the friendship actually is gay. Maybe you just have to be classy and British. Yet imagine a world in which male friendship was not a comic test of masculinity but just about respect and support and fun. Because when Hill talks about words that are hurtful, it doesn't just mean obvious slurs. It means demeaning little putdowns about what you depict as degrading behavior. But maybe the normal world isn't ready for such enlightenment. As Stewart explains, he and his bestie make it work because they are both "passionate about Shakespeare and being in the theater." And, he adds, "We are mutant superheroes. Is that enough?"