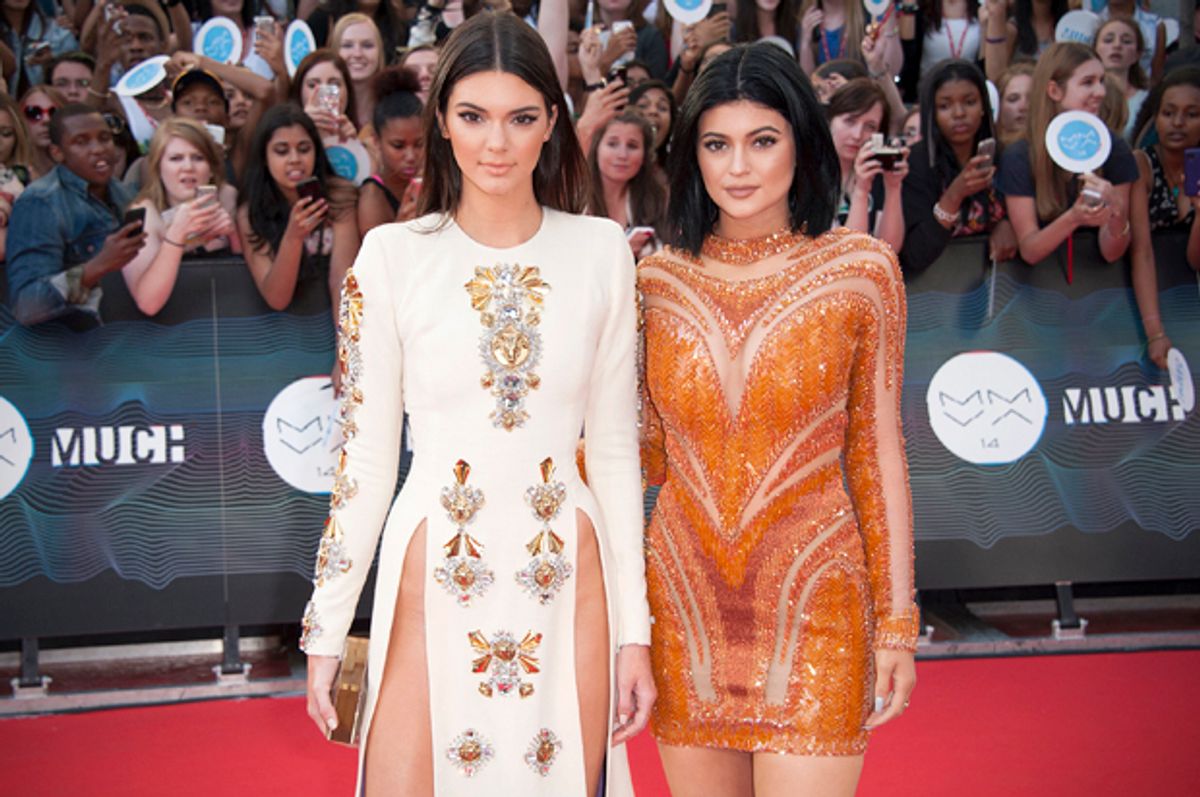 In simpler times, a celebrity gossip site could get traction for days out of a simple phrase like "wardrobe malfunction" or the classic "nip slip." And sure, any combination of a woman's name and the words "flaunts" and "post baby body" is bound to be at least a minor hit, even though critic Sam Adams has noted the more accurate "Woman has child, maintains corporeal existence" has a nice ring to it. But if some of the headlines from just the past few days are any indication, either the fickle public demands more or writers have just given up. Behold the new generation of slobbering celebrity gawking! Nakeder! Obviouser!

For Sunday's MuchMusic Awards, Kendall Jenner -- whose main claim to fame thus far is an inability to read teleprompters -- quickly created a stir when she arrived on the red carpet in a long sleeved gown with a modest neckline – and high slits starting at hip bones and driving headline writers right into a heretofore unexpressed descriptive frenzy. Elle observed, "There's side boob. And then there's side pelvis." International Business Times went more traditional, announcing, "Kendall Jenner Shocks Everyone by Ditching Underwear, Wears Double Slit in Very Revealing Dress at MMVAs," and explaining, "The dress showed Kendall's pelvic bones from both the sides and made it very obvious that she was not wearing any panties as she hosted the event." HuffPo similarly declared that "Kendall Jenner Shows Her Pelvic Bones in a Dress at the MuchMusic Awards," and E!, meanwhile, graciously included Kendall's sister Kylie in the mix, announcing, "NEWS: Kendall Jenner Ditches Underwear While Kylie Jenner Skips Bra for 2014 MuchMusic Video Awards — See the Pic!" I love everything about that collection of words, but I think it's the word "news" that makes it. My favorite observation, however, came from Us, which reported that "the 18-year-old model took nudity to a new level." WITH HER PELVIC BONES. What's next? "Kate Upton flaunts sexy spine in backless gown"? "Cameron Diaz goes barefoot, reveals racy metatarsus"? "This shot of the inside of Mila Kunis' ear takes nudity to a whole new dimension"?

It was, all in all, a great weekend for young female celebrities to show off some skin. Elsewhere, in case you missed it, JustJared reported that the 21-year-old "Miley Cyrus Goes Topless Before Her Shower on Instagram!" The widely shared Instagram photo of the singer had her strategically and maddeningly to headline writers flaunting yet concealing her body in what she called a "pre shower selfie." So there you have it. Apparently Miley Cyrus takes her shirt off before she gets in the shower.

It's no accident what these young ladies are doing here. They know that when they offer the world a suggestion of a glimpse of a nipple or a bikini zone, they are unleashing a world of relief on the celebrity sites that might otherwise have to trawl around hoping and praying that somewhere out there, a Victoria's Secret model is jogging on a beach. Showing it off is part of the job. And a creatively revealing look – think Jennifer Lopez in that green, up to there and down to there Versace or Elizabeth Hurley in that insane black safety pin gown --  can catapult a woman to a whole new level of stardom. Though she doesn't exactly need to try to get anybody's attention, Rihanna quite brilliantly worked the whole "Take a look at me now" thing earlier this month – and nearly broke the Internet --  with the shimmering, little to the imagination-leaving fishnet gown she donned for the CFDA Awards.

But if young and beautiful women are going to put themselves out there and fulfill the endless demand for images of them in which a reasonable assumption of a lack of underwear may be made, then the least the entertainment sites that write about them can do is come up with headlines that aren't entirely stupid. You can take a step back and say, "Sure, I've used the word 'racy' a hundred times already this week and it's only Monday, but I probably don't need to mention that toplessness and showering are going hand in hand here." You can ask yourself, "Is 'pelvis' the sexiest word I could use here? Because at least half the people reading this are probably going to associate it with gynecological exams or football injures." Kylie Jenner and her cleverly slashed dresses deserve better than this. And if you need to stop and wonder if nudity is something that can actually be taken a new level, you need to come up with a better adjective or two.