KFC shows how to handle a social media disaster

A scarred child gets help from an unlikely source 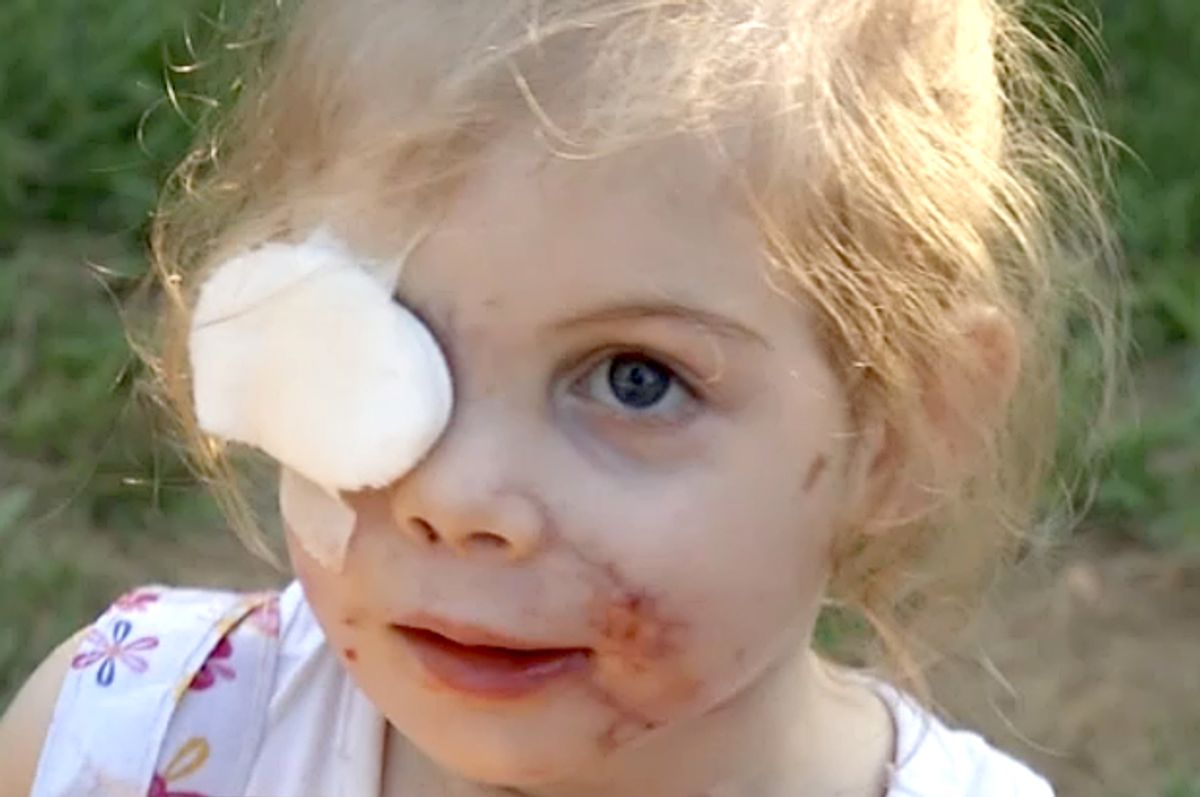 When you're an industry giant and you're confronted with a potential social media crapstorm thanks to the ignorance of some low-level mouth breather employee, you have a choice. You can distance yourself as quickly as possible from the whole ugly situation with a stilted and terse statement that what happened in no way reflects your corporate policy and you're a proud supporter and blah blah blah. Or you can take the incident as chance to be a little bit awesome. This week, KFC chose the latter.

In April, 3-year-old Victoria Wilcher was attacked and mauled by three pit bulls while visiting her grandfather's mobile home. Officials said there were 10 pit bulls living in the home at the time. As her family's Facebook page describes, the child suffered "bites all over her body but the most damage was to her sweet little face. She had a broken upper and lower jaw, broken nose, cheekbones and right eye socket. She lost her right eye completely and the ability to move the right side of her face. They have reconstructed her bottom jaw but can't do any more surgeries until she grows new bone in her face due to the fact that the broken pieces are too small to piece together." Just weeks ago, she was still on a feeding tube, and the family admitted it was "struggling financially due to the fact that the insurance company is refusing to pay for many of her medicines and anything to do with her feeding tube or formula which is $550 a month." Then on Thursday, shortly after posting an update that "Victoria received a good report from the ophthalmologist today," there was another one. It was a photo of the child, scarred and smiling under her adorable eye patch, with the message, "Does this face look scary to you? Last week at KFC in Jackson MS this precious face was asked to leave because her face scared the other diners. I personally will never step foot in another KFC again and will be personally writing the CEO."

By Friday, the story was going viral. Victoria's grandmother Kelly Mullins – who is divorced from the girl's grandfather -- told WAPT News that "I took her to the doctor and I went to KFC. I ordered a large sweet tea and her some mashed potatoes and gravy because she was hungry. She was on a feeding tube at the time, but I figured she could just swallow [the potatoes.] They just told us, they said, 'We have to ask you to leave because her face is disrupting our customers.' [Victoria] understood exactly what they said." She said that child cried all the way home and added, "No matter what's wrong with a person, if a person's different, if a person's scarred, or is a different color or anything, people shouldn't be discriminated against. Her being 3 years old and already being discriminated against, it makes me mad, because I know for the rest of her life it's going to be like that."

Or maybe not. The news of the incident quickly spread to social media, where the outcry intensified. KFC spokesman Rick Maynard issued a statement that the company was launching an investigation into the accusation, adding that "We have been in touch with the family and are committed to doing something appropriate for this beautiful little girl and her family." The company then spent a good part of its weekend replying to angry patrons on Twitter and Facebook, respectfully and clearly, which isn't always easy when you have, I am not kidding, people posting pictures of Nazis on your page. And it added on Victoria's own Facebook page a message to "Please accept our sincere apologies while we try to investigate this incident … and we wish nothing but the best for Victoria in her recovery." Then, true to its promise to do something for the child, the company announced it was giving Victoria and her family $30,000 toward her medical bills, adding, "The entire KFC family is behind Victoria."

KFC, which, along with Pizza Hut and Taco Bell, is part of Yum! brands, knows that handing a big check over to an injured child is great publicity. It knows very well that once you're tarred with the "kicks out injured little girls" brush you've got to be all over that, damage control-wise. The company, in its social media response and in its stepping up and pledging the money, has demonstrated that it understands that a brand can be made or broken by its customer perceptions of it. KFC cannily recognized that an apology is nice, but when you are a big company and you're talking about a family that's hurting emotionally and financially, that specifically chose your establishment as a treat after a child's doctor appointment, you have a chance there to go big. Others can be cynical about that, but if you want to be cynical about a little girl who's been through hell getting help with her medical expenses, you can be cynical on your own. Victoria's family, meanwhile, is continuing to solicit donations for her bills, and they've received an outpouring of support and encouragement. And though a check and an apology can't eradicate the trauma of what happened to that girl in April or one person's recent cruelty, it can inspire others to acts of kindness. It can give a family a happier outcome to a story that started out horribly. And its sensitive handling of the entire situation has been the smartest thing KFC has done since the Double Down.