Dick Cheney, Iraq and the ghosts of Vietnam 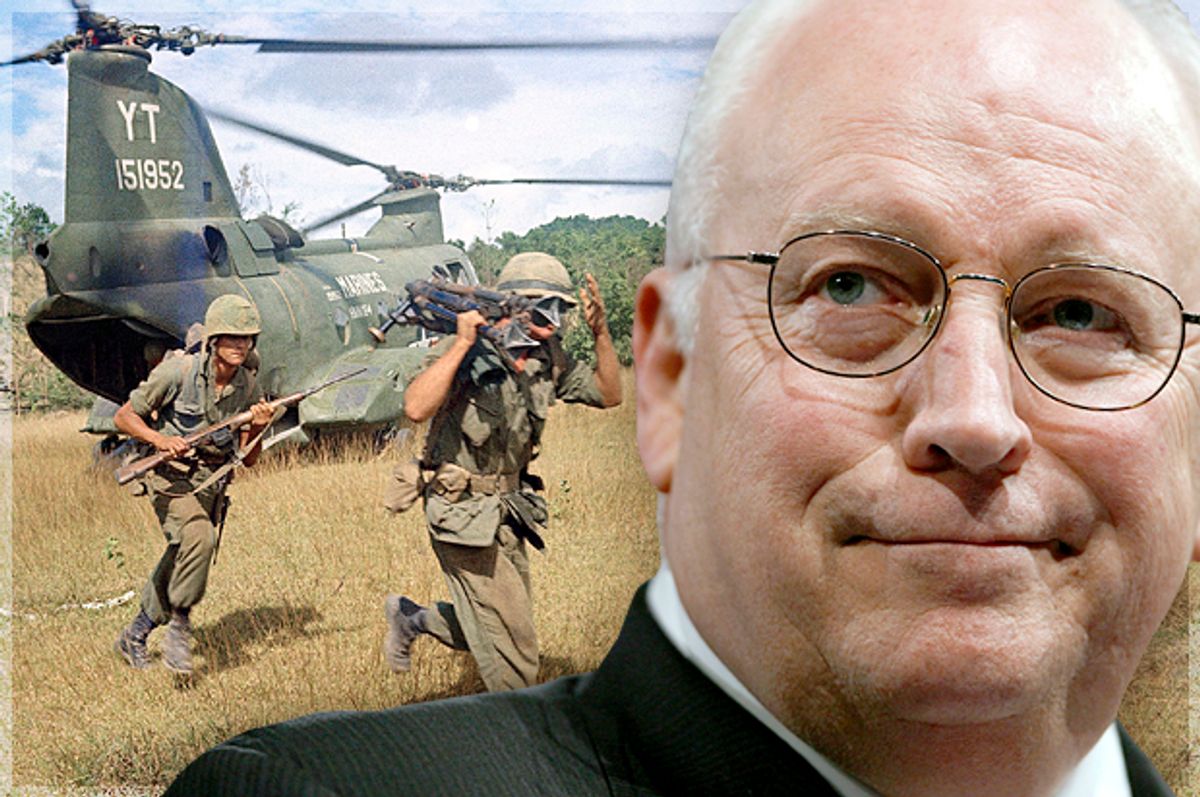 Neither the film world nor the political world paid much attention to R. J. Cutler’s Showtime documentary “The World According to Dick Cheney,” released in the dim and distant days of March 2013, when we thought Cheney had departed public life for good. I suppose the general reaction was “Oh Jesus Christ, not that guy again!” Even the tone of Cutler’s film, built around 20 hours of interviews with the most “consequential” vice president in American history – Cheney’s word, but he’s probably right – was faintly elegiac. This guy changed the world, whatever you think of him, and it was time to capture his portrait before he sailed for the other shore.

Leaving aside the question of whether Dick Cheney can ever experience physical death – doesn’t the power of the One Ring more or less make you immortal? – he’s back. This week Cheney was in the news at the head of an army of neocon zombies, seemingly reanimated from the foreign-policy tomb of the Bush II administration, leading the ideological charge for yet more war in Iraq. Or rather, since even Dick Cheney cannot possibly believe that is likely, for the principle that all blame for the actual or impending Iraqi disaster should be assigned to the cut-and-run pussies of the current administration, and none at all to the one that lied its way into the whole catastrophic misadventure in the first place.

Watching the embarrassing video clip of Cheney, in his Wyoming rancher drag, as he and failed-candidate daughter Liz Cheney announce their hawkish new anti-Obama foreign-policy nonprofit, brought me back to a key moment in Cutler’s film. It’s really just a biographical footnote, midway through Cheney’s extraordinary rise from alcoholic semi-employment in Rock Springs, Wyoming, at age 23 to being Gerald Ford’s White House chief of staff at age 34, but it speaks volumes. As unlikely as this sounds, Cheney spent 1968, that watershed year in American political and cultural history, as a graduate student in political science at the University of Wisconsin, one of the most radicalized campuses in the country.

There was apparently a small group of conservative poli-sci types in Madison at that time, and I bet that wasn’t fun. Protests and demonstrations against American foreign policy and the Vietnam War were almost a weekly occurrence at Wisconsin during Cheney’s brief stint there. There was a student general strike in the fall of 1967, and another one in the spring of 1969. May of 1968 saw the first of two campus bombings that were presumably the work of the Weather Underground. This fervid atmosphere of chaos and dissent was unfamiliar and distressing to a crew-cut Young Republican from the Mountain West, and Cheney quietly says that the whole experience pushed him further to the right. It’s as close as he ever comes to a moment of self-revelation in “The World According to Dick Cheney,” unless you count his obvious man-crush on Donald Rumsfeld, his friend, mentor and ideological soulmate.

I think that’s important for several reasons. First of all, Cheney has seen the other side of American political life up close, and he hated it. More important still, like the other architects of the Bush administration’s disastrous foreign policy, he was trying to make up for what he saw as the sins of the past. Cheney and Paul Wolfowitz and Douglas Feith and Bill Kristol and the rest of those shameless clowns who were so profoundly wrong about the initial Iraq war (and everything else) are understandably eager to rewrite history such that they are its heroes and its misunderstood prophets. But the history that oppresses those guys, and the entire imperialist intelligentsia they represent, goes back a lot further than Saddam Hussein and 9/11. They’re still haunted by a different specter: the American empire’s Waterloo moment in Vietnam, more than 40 years ago, and the social discord it produced in places like Madison and Berkeley and Chicago and New York. For them, the entire Iraq conflict was almost a stand-in for the real thing, a delusional salve applied to an old psychic wound. Give them Marty McFly’s time-traveling DeLorean and they’d go whizzing right past Baghdad and head for Hanoi, circa 1969, with a thermonuclear device in tow.

I know exactly how irritating it is to be told that American politics keeps replaying the ideological wars of the 1960s, having been barraged with that rhetoric by veterans of the New Left for most of my life. It’s less and less accurate as time goes on, and the right’s persistent efforts to identify Barack Obama as a ’60s-style radical would be funny if they weren’t acutely painful. Whatever his flaws and merits, Obama was a small child during the 1960s, and one who largely grew up overseas. He genuinely was not molded by the politics of that era. But when it comes to the Bush-Cheney Iraq campaign, the entire enterprise was contaminated from the outset with post-Vietnam stress disorder. American conservatives of Cheney’s generation are caught in an evil and bloodthirsty variation on “Groundhog Day”: They’ll keep fighting and refighting Vietnam until they die, and it’s never going to turn out right.

Of course those who shaped policy and held the levers of power, like Cheney and Rumsfeld, deserve most of the blame for the recycled fiasco of Iraq, and for how it seems to be ending. But as Michael Moore has pointed out, we must also remember that a wide spectrum of so-called liberals and moderates contributed to war fever. As I see it, they too were infected with the same strain of PVSD, and embraced the Iraq war as a chance to repent for their un-American attitudes of yesteryear.

There were “liberal hawks” like Paul Berman or Christopher Hitchens, who had once been ferocious opponents of the Vietnam War. There were 29 Democratic senators, including onetime ’60s activists Hillary Clinton and John Kerry. There were supposedly sober and disinterested journalists, like the editors of the New York Times, the New Republic, the Atlantic and the New Yorker, who eagerly abdicated their roles as watchdogs of democracy and swallowed the Bush administration’s lies.

What all those people shared, I believe, was the conscious or unconscious belief that a foreign war with a plausible-sounding excuse, and one that ended with a clean victory, would be good for America and might restore the sense of national unity and purpose we putatively lost in the ’60s. If it sounds insane to contemplate ordering the deaths of thousands of people as a form of national therapy, you’re beginning to understand the true costs of PVSD, as well as the infantile and solipsistic character of American patriotism. If we see that today in its most diseased form with the renewed warmongering of Cheney, Feith, Kristol et al., the responsible-grownup version is still with us as well, in the pro-imperal windbaggery of Niall Ferguson or in Robert Kagan’s recent New Republic essay arguing that America should reassert itself as the dominant global superpower, despite the obvious fact that we’re broke, politically paralyzed and lack the stomach for any further overseas debacles.

The Iraq war was specifically conceived as an antidote to Vietnam – as a brief, low-intensity, high-impact military victory that would make us feel better about ourselves. Ultimately it became a distorted replica or parody of Vietnam instead, a set of familiar mistakes in a new setting. It was shockingly expensive, grotesquely mismanaged and politically divisive, and its biggest success lay in unifying and empowering a nationalist opposition and turning the civilian population of the invaded country against us. There was widespread surprise that it didn’t work; Cheney, Rumsfeld and their allies have more or less continued to insist that it did work and we just haven’t noticed.

We can debate whether Cheney and his neocon brain trust really believed their own moronic-utopian domino theory about bombing the entire Arab-Muslim world into a set of pseudo-democratic American satellite nations “floating on a sea of oil” (in Paul Wolfowitz’s phrase). I guess somebody must have believed it, but I see that as pure ideological superstructure out of the Leo Strauss playbook, or in plain English as hokum designed to draw the suckers into the tent. That prospect was about as realistic as all the virgins in Paradise that are promised to jihadist suicide bombers, or the Soviet leadership’s pronouncements that one day pure communism would conquer the earth and the state would wither away.

If we don’t quite know how the Iraq endgame will play out, it’s not pretty. The prospect of helicopters lifting embassy personnel off the roof, Saigon-style, does not seem terribly far away. Last week Obama announced that he would order military advisers into the country to pep up the Iraqi army, which seems to be collapsing before the Sunni insurgency. At least that’s an intriguing departure from the script: It’s like the beginning and the end of the Vietnam War at the same time! Obama must feel as if his presidency has been cursed by a malicious wizard; the principal foreign-policy pledge that got him elected, and that he more or less fulfilled, is unraveling as if by magic.

We know who the dark wizard is who cast that spell, but it’s the rest of us who granted him his power. Dick Cheney yearns to fight the Iraq war over again – or fight another and another in Iran or Syria or somewhere else – in the vain hope that things will turn out differently, America’s virility will be restored and his legacy redeemed. That’s not going to happen; rancher togs or not, the Cheney of 2014 is an old and broken man with a fading constituency. But that’s small comfort to the rest of us, not to mention the people of Iraq. He destroyed their nation, bankrupted ours and did his damnedest to transmit the toxic effects of Vietnam to a new generation. One day we’ll be free of that past, presumably, but that day has not come.