The conservative heavyweight makes an impassioned case for climate action 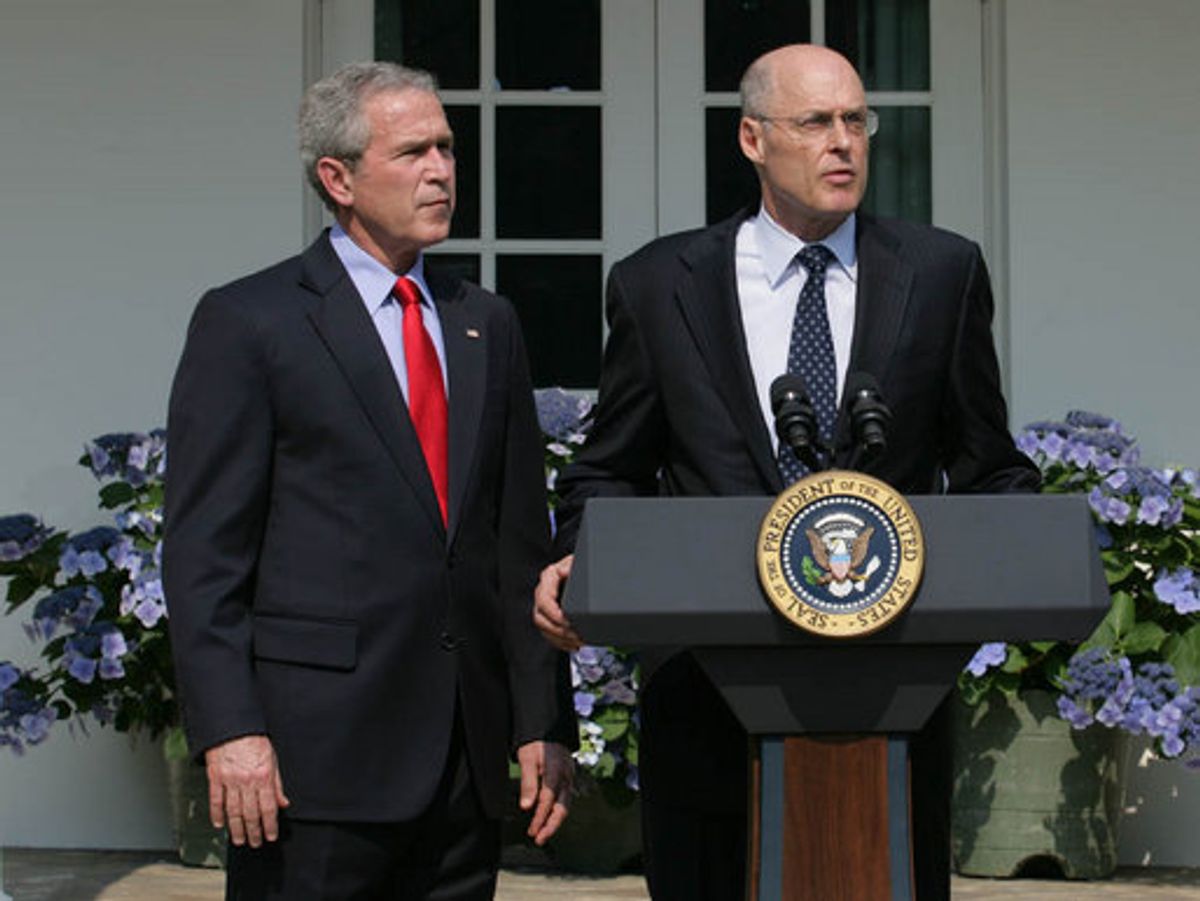 When Henry "Hank" Paulson Jr. warns there's a "crash" coming, we'd be crazy not to listen.

Paulson, a former CEO of Goldman Sachs who solidified his GOP cred as Treasury secretary under George W. Bush from July 2006 to January 2009, penned an Op-Ed for the New York Times Sunday on climate change. And instead of parroting the expected Republican denial, or even attempting to downplay the risks, Paulson does something somewhat extraordinary: He acknowledges that climate change is "a crisis we can’t afford to ignore," and exhorts the members of his party to treat it as such.

In the column, Paulson lambasts fellow Republicans for ignoring the reality of climate change in the face of overwhelming evidence, then draws a parallel between the "coming climate crash" and the 2008 financial crisis:

I was secretary of the Treasury when the credit bubble burst, so I think it’s fair to say that I know a little bit about risk, assessing outcomes and problem-solving. Looking back at the dark days of the financial crisis in 2008, it is easy to see the similarities between the financial crisis and the climate challenge we now face.

We are building up excesses (debt in 2008, greenhouse gas emissions that are trapping heat now). Our government policies are flawed (incentivizing us to borrow too much to finance homes then, and encouraging the overuse of carbon-based fuels now). Our experts (financial experts then, climate scientists now) try to understand what they see and to model possible futures. And the outsize risks have the potential to be tremendously damaging (to a globalized economy then, and the global climate now).

...With that experience indelibly affecting my perspective, viewing climate change in terms of risk assessment and risk management makes clear to me that taking a cautiously conservative stance — that is, waiting for more information before acting — is actually taking a very radical risk. We’ll never know enough to resolve all of the uncertainties. But we know enough to recognize that we must act now.

His proposed solution -- instituting a tax on carbon emissions -- isn't a new one: economists have been making the Republican case for a carbon tax for some time now. Paulson reiterates:

Some members of my political party worry that pricing carbon is a “big government” intervention. In fact, it will reduce the role of government, which, on our present course, increasingly will be called on to help communities and regions affected by climate-related disasters like floods, drought-related crop failures and extreme weather like tornadoes, hurricanes and other violent storms. We’ll all be paying those costs. Not once, but many times over.

A tax, he adds, has the potential to "unleash a wave of innovation to develop technologies, lower the costs of clean energy and create jobs as we and other nations develop new energy products and infrastructure." As a bonus, he adds, it "would strengthen national security by reducing the world’s dependence on governments like Russia and Iran." (Times columnist and award-winning economist Paul Krugman, for the record, doesn't think that's going to happen, and urges Paulson to keep an open mind about second-best solutions" that might end up looking less the financial crisis and more like -- gasp -- health reform.)

But just to reach this point -- where people on both sides of the political divide stop fighting over whether climate change is happening and move on to debating about what's to be done -- is momentous, as is Paulson's public declaration that climate change is "the challenge of our time." Progressives have known that for a while now. It's about time everyone else caught up.