Sting finally does something cool 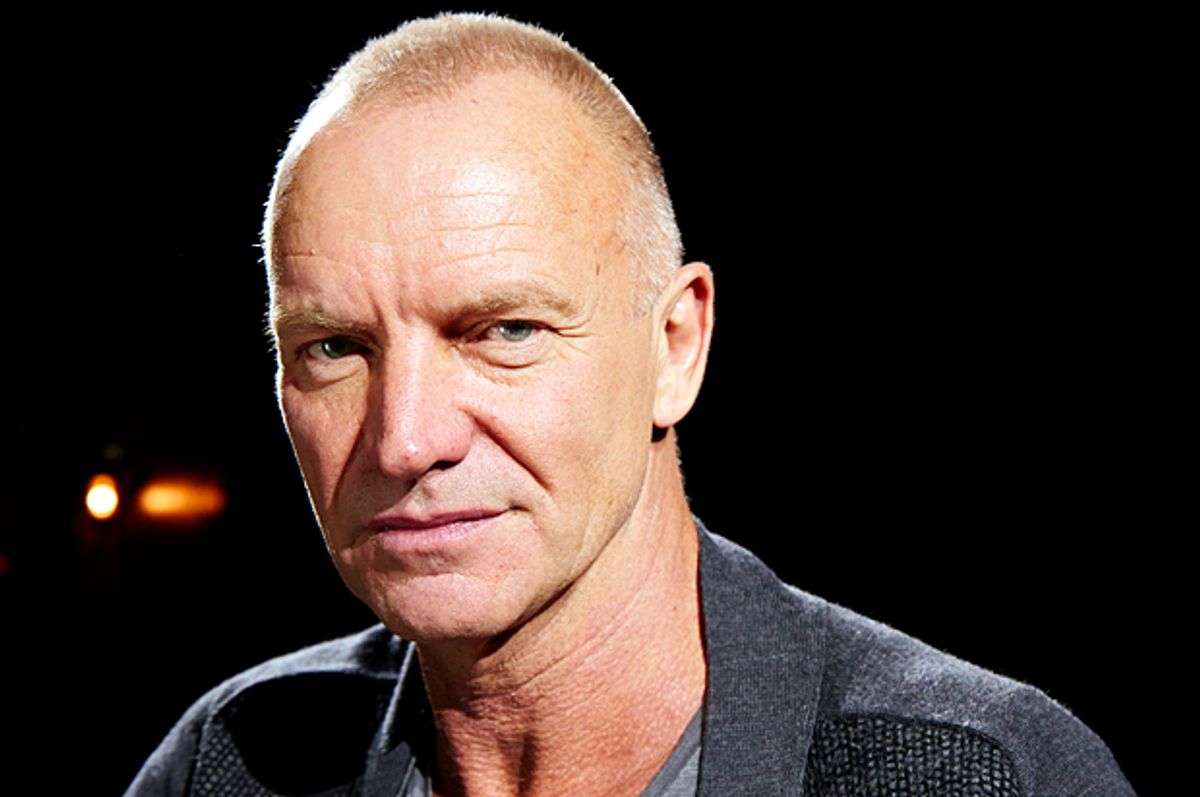 With a single revelation tailor made to destroy our 35 years of mocking him as a stuffy twit, it turns out Sting is pretty cool.

You know, that Sting. The guy who launched his career sporting a fake Jamaican accent and who in later years became famed for tantric sex stories and the lute playing. The man who "30 Rock" once convincingly described as living on Tan Penis Island. If you do a Google search for his name and "pretentious" you will get nearly 200,000 results. So how did a guy worth roughly $306 million, a man who recently put his seven-bedroom, 8,500-square-foot London home on the market, turn out to be so grounded? In a conversation this weekend with the Mail, the Grammy winner spoke proudly of his six children – aged 37 to 18 -- from his two marriages, and how they won't be counting on the royalties from his old hits to make themselves rich. Reflecting on aging, the 62-year-old said, "I have a story still to tell and part of that is I am facing the end of my life." And he said he has told his children, "There won’t be much money left because we are spending it! We have a lot of commitments. What comes in we spend, and there isn’t much left. I certainly don’t want to leave them trust funds that are albatrosses round their necks. They have to work. All my kids know that and they rarely ask me for anything, which I really respect and appreciate. Obviously," he added, " if they were in trouble I would help them, but I’ve never really had to do that. They have this work ethic that makes them want to succeed on their own merit. People make assumptions, that they were born with a silver spoon in their mouth, but they have not been given a lot." As they Mail story notes, celebrity chef Nigella Lawson -- the daughter of a conservative MP and an heiress – has similarly said, "I am determined that my children should have no financial security. It ruins people not having to earn money."

Though you might think that expecting one's adult children to earn their own keep would be a good thing, the headlines regarding Sting's revelation were far from flattering. Gawker declared this weekend that "Sting is stingy," the Detroit Free Press reported, "Sting to his kids: Earn your own money!" and Time grimly announced that Sting had said "My Kids Aren't Getting Any of My Money."

His stance is certainly a sharp contrast to the glut of parents currently bankrolling the gentrification of your neighborhood with the fancy new condos they're buying their adult children. It's a far step away from Johnny Depp, who often pulls down $50 million in a single year and says, "I have to. I mean, it's not for me. Do you know what I mean? At this point, it's for my kids. It's ridiculous, yeah, yeah. But ultimately is it for me? No. No. It's for the kids." It's his money to earn and spend, but let it be noted that Johnny Depp's kids apparently need superhuman amounts of funding.

As parents, we want to provide for our children and give them a comfortable life. Yet as Sting clearly recognizes, there's a difference between giving them a good start and not helping them grow up. A year ago, 16-year-old Texan Ethan Couch killed four people and seriously injured two others while driving while intoxicated. He received no jail time after his attorneys argued that he was a victim of "affluenza, where his family felt that wealth bought privilege and there was no rational link between behavior and consequences." Earlier this year, Princeton student Tal Fortgang rather unconvincingly argued that the advantages he'd received in life strictly via the hard work of his family were somehow his own personal victory, declaring, "I have checked my privilege. I apologize for nothing."

Having the option of a trust fund is an "albatross" few of us – or our children – have ever had the option of wearing. But when those who do are not given the opportunity to work and to succeed and fail on their own, we are all left with a small pool of arrogant, powerful second- and third-generation snots running around who truly do believe that being born with more money makes them superior human beings. And why shouldn't they believe that, if they've known the hardship of effort? Sting's children have already been brought up in wealth and sophistication; they are currently forging careers in film and music that their upbringings and family connections no doubt aided in launching them into. The Sumner offspring are not tiny orphans, shivering in the cold while Sting and Trudie Styler sit inside drinking champagne by the hearth. They're functioning adults. And they are, I suspect, doing just fine, thanks, because they have parents who love them enough to not give them everything.