Trash fish: It's gross, tainted by slavery and possibly in your dog food 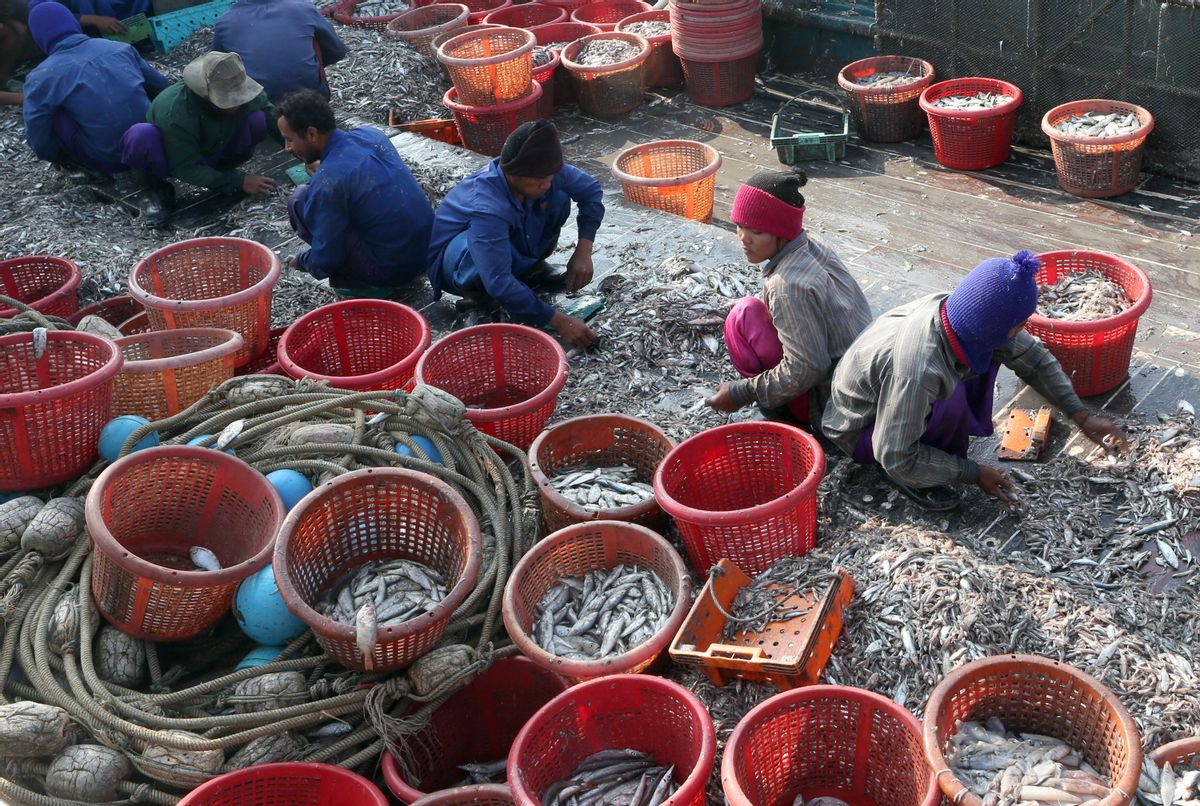 BANGKOK — For years, it was a poorly kept secret. Thailand’s fishing industry — a key supplier to the US — is entangled in barbaric slavery.

Today, slave labor on Thai trawlers is no longer a secret. It’s a worldwide scandal.

Wave after wave of damning investigations — previously by GlobalPost, most recently by The Guardian — have helped reveal an underground trade in which men are press-ganged into toiling on the seas for zero pay.

Smuggled from poor villages in Myanmar or Cambodia, with promises of jobs on land, men and teen boys are instead forced onto Thai-owned boats plying distant waters. Quitting is forbidden. Disobedience is punished with beatings, dismemberment and worse.

Many of these migrants — and the Thai boatmen who lord over them — have told GlobalPost that murder on Thai trawlers is practically routine. As one Thai crewman explained: “I saw an entire foreign crew shot dead... The boss didn’t want to pay up so he lined them up on the side of the boat and shot them one by one.”

This practice’s horrors have become so well known that — after years of giving Thailand a pass — the US may announce sanctions against the Southeast Asian nation this week.

The implications could be huge for Thailand’s $7 billion global seafood industry. Thailand is America’s second-largest seafood supplier thanks in large part to Western appetites for cheap shrimp and fish sticks.

But there is one commodity churned out by this industry that’s notoriously reliant on forced labor. It’s called “trash fish” — and it’s as unpleasant as it sounds.

Trash fish doesn’t refer to a single species. It’s a catch-all term for two types of wild-caught seafood: species that are unpalatable (to human tongues, at least) and species that would grow into big, tasty fish if nets had not snared them so young.

The link between trash fish and forced labor is clear. The accounts of escaped slaves indicate that victims invariably work on Thai-owned trawlers, small vessels that travel vast distances to dredge trash fish in giant nets.

Southeast Asia’s seas are so overfished that high-value species are increasingly rare. The scarcity of quality fish forces trawler captains to scour for loads and loads of trash fish — a grueling, labor-intensive chore.

“There is great pressure to drive down costs,” said Steve Trent, executive director of the London-based Environmental Justice Foundation, which has conducted extensive investigations into forced labor on Thai trawlers. “In some people’s minds, that’s practically legitimized the use of slave labor.”

“The fisheries are out of control,” Trent said. “There is no effective management. In a relatively short time, since the industrial trawlers were introduced to the region, you’ve had a more than 90 percent decline in catch. They’re crumbling beneath the weight of this mismanagement.”

Much of the supply chain from trawler net to supermarket is simply not monitored or properly policed. By the time slavery-tainted fish reaches the shore, the origins have been obscured by a series of fishmongers and middlemen. The system is so murky that seafood companies can’t honestly assert that their trash fish purchases are slavery free.

“They claimed they don’t know. Or they’re preferred to look the other way,” Trent said. “But now you have clear evidence of abuse in the production of trash fish ... and you cannot be sure you don’t have something on your shelves that does not have slavery or forced labor in its production.”

Here are three items reliant on trash fish that you may find in your pantry or freezer:

CP Foods has long sold shrimp to Wal-Mart and Costco as well as Tesco, a UK-headquartered superstore chain, and France’s Carrefour. So far, only Carrefour has stopped buying shrimp from CP Foods following Guardian’s expose.

Last year, $171 million worth of dog and cat food entered the US from Thailand, according to the United States Department of Agriculture. When it comes to dog and cat food in “sealed in airtight containers” — which typically means wet pet food — Thailand is America’s top foreign supplier.

Fish sauce: Trash fish is a key ingredient in fish sauce — a savory, amber-colored liquid. In many Asian kitchens, it’s an ingredient no less crucial than salt in Western kitchens.

In the US, Thai fish sauce rules 85 percent of the market. Last year, according the US government statistics, Americans consumed more than 35 million pounds of Thai-produced fish sauce. That’s enough to feed two ounces of fish sauce to every American man, woman and child.

The Environmental Justice Foundation has looked into links between slave-caught fish and factories and will “examine them further,” Trent said. “I don’t think people in the major consumer markets want to be eating a health product produced by slaves.”