Was the KFC story a hoax?

New revelations cast down on the viral victory of Victoria Wilcher 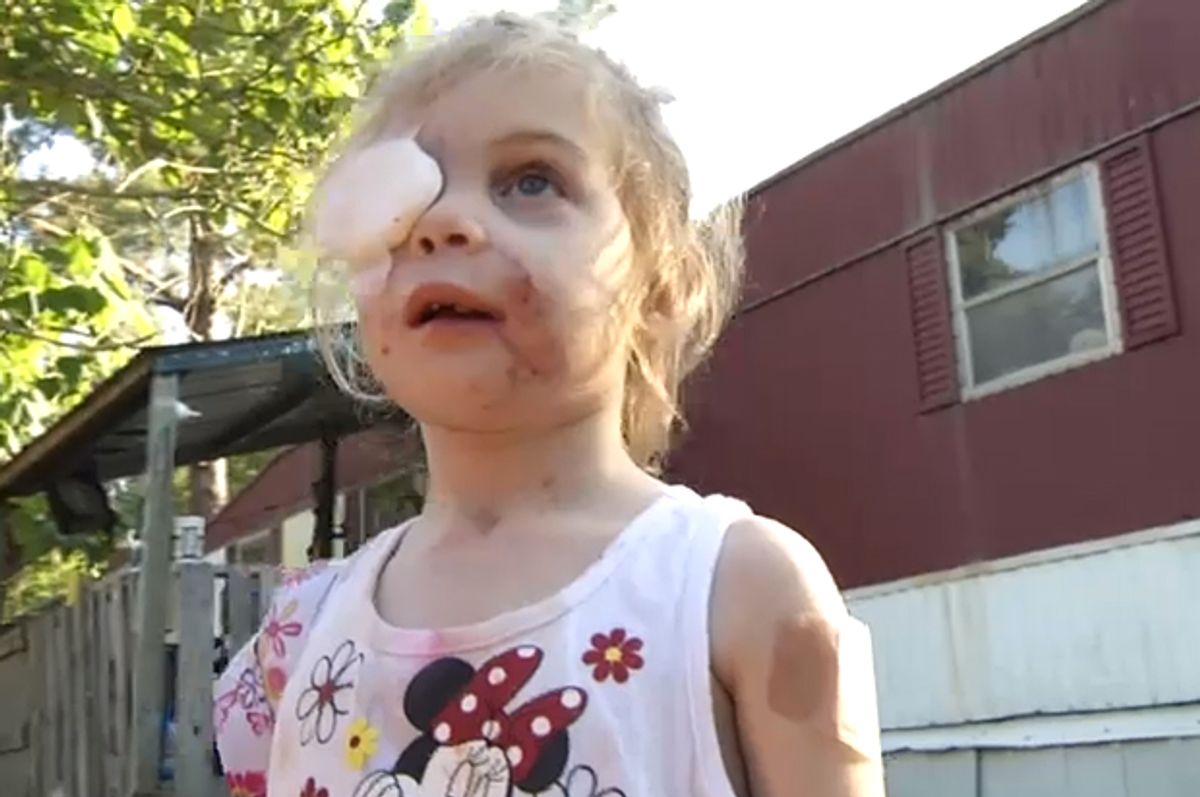 In the most Downworthy story of the week thus far, the Clarion-Ledger is now reporting that the tale of 3-year-old Victoria Wilcher, the scarred little girl allegedly kicked out of a Jackson, Mississippi, KFC last month, was a hoax.

Wilcher's odyssey made headlines around the world last week, when her family, who admit they've been "struggling financially," alleged on her Victoria's Victories Facebook  that the child was asked to leave a local KFC "because her face scared the other diners." Wilcher was severely injured by three of her grandfather's pit bulls in April and suffered several broken facial bones and the loss of an eye. The story reached first the local news, with Wilcher's grandmother Kelly Mullins telling reporters, "Her being 3 years old and already being discriminated against, it makes me mad, because I know for the rest of her life it’s going to be like that" -- and then quickly picked up steam. KFC, with a rapidly escalating social media crisis on its hands, swooped in immediately, asking the family to "Please accept our sincere apologies while we try to investigate this incident" and announcing, "We have been in touch with the family and are committed to doing something appropriate for this beautiful little girl and her family." It soon followed up with a pledge of $30,000 toward Wilcher's medical bills – and a surge on the family's own fundraising page and a Las Vegas reconstructive surgeon even offering his services free of charge.

It was a story that featured a child with real, well-documented injuries and a corporate response so decisive it seemed to indicate that KFC had indeed already investigated and discovered supporting evidence for the family's claims. That's why I believed it. You don't normally see that much eagerness to atone and write a big check based on an unsubstantiated report. And in its seemingly positive turnaround, the story briefly had echoes of the story of Karen Klein, the cruelly bullied school bus driver who two years ago received an unprecedented outpouring of support when a video of her experience with of a bunch of mean kids went viral.

But even with the best possible outcome, one in which a cruel wrong was generously righted, what this never could have was a feel-good tale about human nature. As the Clarion-Ledger reports, "employees and managers at both Jackson locations have faced death threats, have had drinks thrown at them through the drive-thru window and have faced constant verbal harassment." And now it gets worse, with the paper saying Monday that "sources with deep knowledge of the investigation" are calling the incident "a made-up story that resulted in the family bilking the public and professionals for more than $135,000 in cash."

The holes in the story stem from the girl's aunt's original account of the episode occurring at a KFC location that is no longer in business. Further chipping away at the story's credibility is a report that surveillance videos from both of the town's KFCs from the day of the alleged incident do not reveal any customers matching the description of Victoria and her grandmother.

And with that information, because everything has to be terrible, any last redeeming shred of goodwill that might have been extracted from the whole story disappeared faster than a bucket of wings. On Victoria's Facebook page Monday, the family vowed, "I promise its not a hoax, I never thought any of this would blow up the way it has. The article circling the web calling this a hoax is untrue. The article it self say the investigation is not complete. It is not over until KFC releases a statement." But the commenters have already rushed in to tell the "family of crackheads" they're "going to hillbilly hell," while the more restrained types have been limiting themselves to crowing that they were right all along. Um, congratulations?

Does it make you feel good to be right when it seems people are terrible? Really? Don't you get tired of it? Don't you get tired of stories like the one of Dayna Morales, the lesbian waitress who claimed last fall to be the victim of homophobia but soon after lost her job as her story unraveled? Don't you get tired of living in a world in which getting "catfished" is a thing? Don't you get tired of discovering things that seem like they might be cool or interesting, and then quickly associating them with the words "faked" and "stunt"? Because I am. I'm tired of distrust as default and I'm super tired of stories of generosity exploited. There are no winners here. There are KFC employees who've faced abuse and death threats at their jobs; there's a family now getting vigorously trolled. And somewhere in all of this, there's a 3-year-old girl who survived a horrific attack and who will live forever with the emotional and physical scars of what she endured, and another victory for cynicism.