"Begin Again": A corny attempt to recapture the magic of "Once" 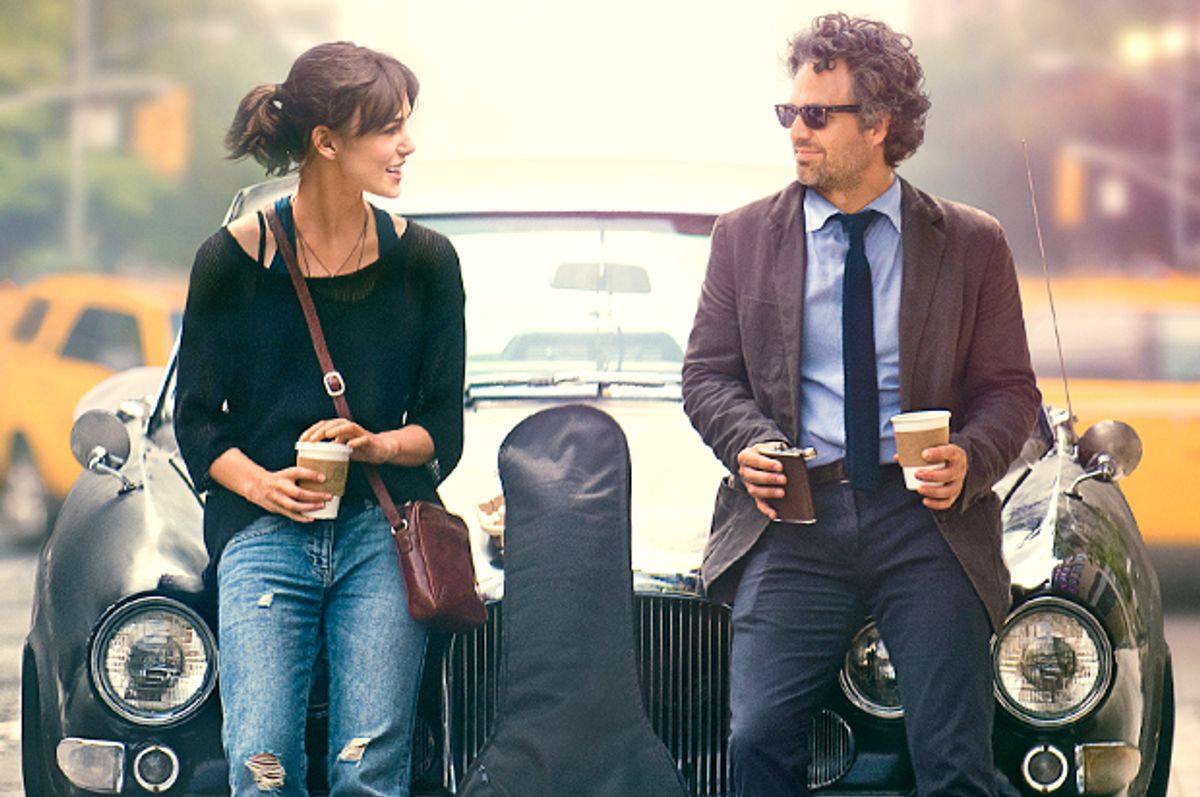 Here’s the fairest place to start with the modest, charming streets-of-New York love story “Begin Again,” which starts the intriguingly mismatched Mark Ruffalo and Keira Knightley: It’s the long-awaited follow-up to “Once” from Irish writer-director John Carney, and if you enjoyed that movie you’ll probably like this one too. But that’s not to say it feels anywhere near as fresh or original, or is likely to have the same impact. “Once” was one of the most thoroughly unlikely international hits of recent years, a classic case of distilling a magical brew largely by accident, and the formula is not susceptible to rebottling or repetition. In “Begin Again,” Carney labors visibly harder at much greater expense, with an American setting and a bevy of stars, to achieve a pale facsimile of the same result.

This film is never less than pleasant to spend time with, and that’s not a minor consideration when it comes to summer moviegoing. There are a few moments, here and there, of the indie-musical magic that Carney seemed to pull off so effortlessly in “Once.” My favorite is a scene when Knightley and Ruffalo’s characters sit in Union Square, sharing a 1998-style headphone splitter and listening to Dooley Wilson’s classic “Casablanca” recording of “As Time Goes By” while they watch kids on BMX bikes doing stunts. Isn’t it amazing, asks Ruffalo, who is playing a boozy, unemployed music-industry veteran named Dan, how music can invest an entirely banal street scene with all kinds of hidden meaning? This moment on a park bench with Knightley’s Gretta, a jilted and rootless English singer-songwriter, is clearly one Dan will long remember. Another nice thing about “Begin Again,” not to give the whole story away, is that it’s never clear where this tenuous collision between Dan and Gretta is heading, and that they never kid themselves they’ve found their one and only.

There may be no one on the 21st-century American screen with Ruffalo’s ability to invest careworn, burned-out characters with soulfulness, and he’s so interesting in every shot of “Begin Again” it almost doesn’t matter that the character of Dan is pretty much a cliché. He’s a guy who’s been left behind amid the wreckage after the music industry’s collapse, which is a great situation, but his personal predicament is overly familiar: He’s separated from his wife (Catherine Keener, very good in a very small role) and has a tarted-up teenage daughter (Hailee Steinfeld) he rarely sees. He’s been drowning his sorrows in whiskey in a dumpy Manhattan apartment, and on the day he first sees Gretta play at an open-mike night, his longtime record-company partner (Yasiin Bey, aka Mos Def, in a drily amusing turn) has cut him loose at last.

Scarlett Johansson was originally supposed to play the role of Gretta, and I’d have been curious to see how that movie turned out. But I’ve never been a Knightley hater, and she’s pushed hard in recent years to go beyond English-rose caricatures, or at least to put her English rose in different circumstances. Of course Gretta is tall and skinny, with Knightley’s enormous eyes and amazing jaw-line, but she’s also a fundamentally uncomfortable person, slightly tomboyish and folkie, who has never sought the limelight. She came to New York as the songwriting and romantic partner of a budding rock star named Dave Kohl (Adam Levine of the band Maroon 5), who has since grown an embarrassing faux-hipster beard and dumped her for his hot personal assistant. So she too is couch-surfing in the pad of an old friend (English comedian James Corden) while waiting to slink back to London. Nobody seems to notice her unfinished song on open-mike night – nobody except Dan, of course.

Levine doesn’t embarrass himself as an actor, and certainly has the chops to carry his arena-rock numbers, but I can’t quite decide if he’s in on the joke when it comes to Dave’s character, or the symbolic role he plays in the story. As the shaggy monstrosity on his chin informs us, Dave is fundamentally a weak-willed person who has allowed his modest but genuine talent to be utterly swamped beneath music-industry bullshit and desperation. Come to think of it, I’m not sure how much John Carney understands Dave’s significance: Dave’s sugary, Americanized dance-floor arrangement of one of Gretta’s intimate ballads comes awfully close to synopsizing the relationship between “Begin Again” and “Once.”

There are any number of scenes in “Begin Again” that kind of work, or almost work, but where Carney is discernibly pushing for “that John Carney feeling.” Dan’s brilliant masterstroke designed to lift Gretta from obscurity involves recording her and a band al fresco, in various scenic New York locations – under the Brooklyn Bridge, on a rooftop facing the Empire State Building, in the tunnel leading to Bethesda Fountain – so, hey presto, it’s a movie about outdoor busking. Gretta even wonders if they should repeat the exercise in various European cities (but doesn’t mention Dublin). Gretta schools Dan’s daughter in dressing less slutty (sluttily?) and recruits her to play guitar on one song – and of course she’s a shredding maniac, the undiscovered Clapton of New York prep-school girls. Then there are well-intended scenes that pretty much don’t work at all, like Dan and Gretta’s visit to the mansion of a millionaire rapper (CeeLo Green), which feels like a 2005 outtake from MTV’s “Cribs.”

What I enjoyed, pretty consistently, was the brittle chemistry between Dan and Gretta, who are falling provisionally in love but aren’t sure how real that is and where it’s likely to lead. They have rescued each other in an unfriendly and heartbroken world and maybe that’s more than enough, especially since each of them is conspicuously still in love with someone else. This is a real love story that’s not about consummation or certainty, a variety we’ve all experienced in real life that only occasionally shows up in the movies. (I guess Sofia Coppola’s “Lost in Translation” would be the ultimate modern example.)

What I did not particularly enjoy in “Begin Again,” sad to say, were the songs, which are largely written by Gregg Alexander with various collaborators. Oh, they’re OK, in an exhausted folk-pop vein, which might also describe Knightley’s capable but unmemorable singing voice. But put this movie’s intended hits, like “Step You Can’t Take Back” or “Lost Stars,” up against anything sung by Glen Hansard and Markéta Irglová in “Once,” and they sound essentially manufactured. Which is more than a little ironic in a movie that is purportedly about rejecting pop-music artifice and embracing authenticity. There’s a reason that the high point of Dan and Gretta’s ambiguous romance, and their obligatory late-night ramble through Manhattan, is set to “As Time Goes By,” Stevie Wonder singing “For Once in My Life” and Sinatra singing “Luck Be a Lady.” There is no conflict between artifice and authenticity in those songs; both are in abundance. That's always been the key to great pop.