Wal-Mart flunks its fact-check: The truth behind its sarcastic response to the Times

After a critical column in the Times raised its ire, Wal-Mart issued an angry response. Here's why it may backfire 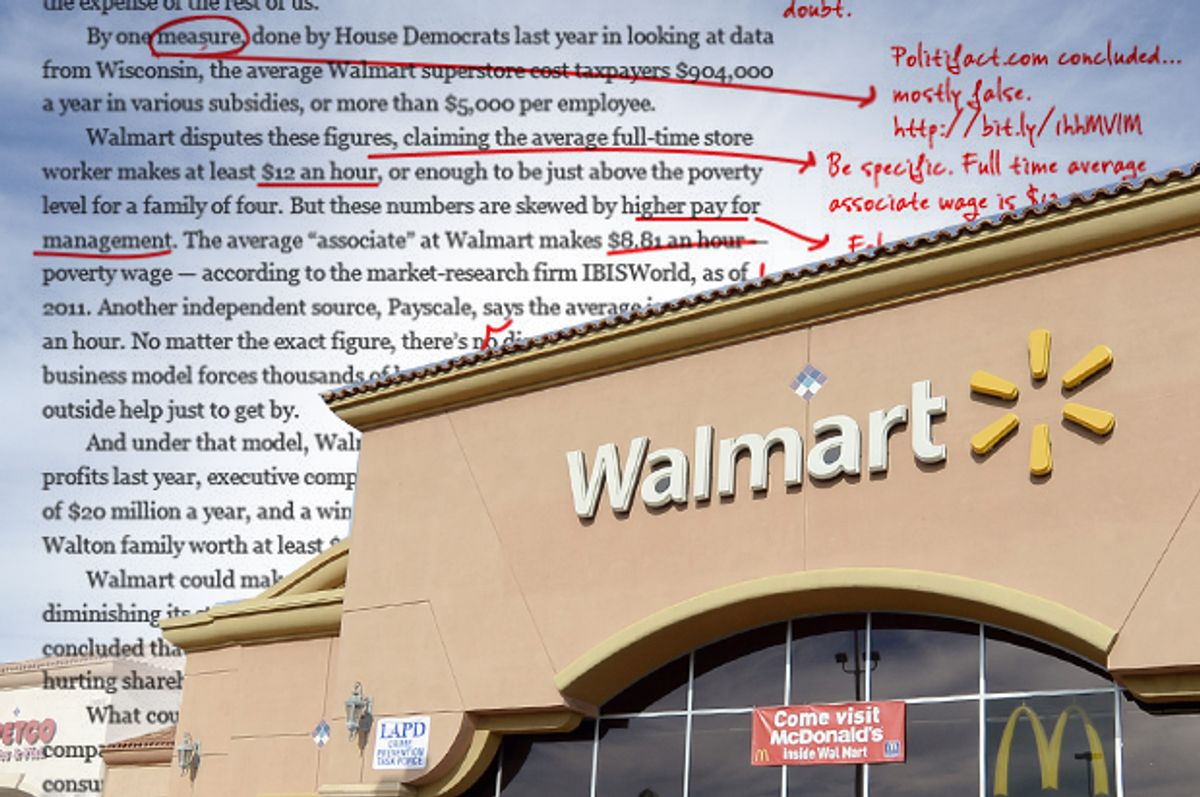 Wal-Mart has a knack for proving its critics right. In its latest example, responding to an Op-Ed by the New York Times’ Timothy Egan this week, the company chose to lash out like a petulant child, unhappy with a negative report card.

Like it or not, Wal-Mart’s participation, due to its size and domination of the retail sector, is critical to any conversation about the future of America’s low-wage workers and their families. Instead of viewing Egan’s column as a moment for serious introspection, the mega-chain created a juvenile infographic on its corporate blog, in which David Tovar, Wal-Mart’s vice president of corporate communications, pretended to scrawl handwritten notes on the Times’ copy.

Taking a page from the Koch brothers P.R. machine, Wal-Mart seems to have made a strategic decision to appeal only to partisans already sympathetic to their cause. If that was the company’s goal, it succeeded. Tucker Carlson’s Daily Caller headlined its story on the company’s response, “Wal-Mart’s Response to This New York Times Hit Piece Is EPIC.” An NBC affiliate, KNWA, located near Wal-Mart’s headquarters in Bentonville, posted a story on ArkansasMatters.com headlined, “Walmart Exec Skewers New York Times Article for False Facts.”

It might have been “EPIC,” but Tovar’s response was light on substance. Supplying limited facts and figures, the company chose anecdotes over data and a "Wizard of Oz" messaging strategy demanding readers pay no attention to the man behind the curtain, and instead follow the shiny objects.

For example, when Egan claimed Wal-Mart “forc[es] employees into public assistance with its poverty-wage structure” the company responded that “we see more associates move off of public assistance as a result of their job at Walmart.”

Their evidence? A 30-second video, produced by Wal-Mart, telling the story of a worker who no longer required food stamps in order to feed her family.

The hard data tells a story far from the inspiring image projected by Wal-Mart. In state after state, from Texas to the company’s home in Arkansas, Wal-Mart almost always ranks at or near the top when companies are ranked by the number of employees enrolled in public assistance programs such as CHIP or Medicaid.

Wal-Mart will rightfully claim this is because they are often the largest employer in the state. However, isn’t one full-time worker requiring public assistance due to poverty wages too many?

Furthermore, every Wal-Mart success story can be matched with one like this from CNN:

“Amy Stinnett works as a cashier making $10 an hour at the Wal-Mart store in Placerville, Calif. It's not enough to make ends meet for the 21-year-old single mother. Stinnett and her son are on MediCal, the California Medicaid program. She relies on food stamps for her son, and borrows money from her family to buy diapers and pay rent.”

Oddly, David Tovar disputes the claim that “Walmart’s business model forces thousands of hard working people to look for outside help just to get by” with nothing more than a slash of ink. If this document were handwritten I would attribute this notation to a red marker accidentally hitting the page.

Another oddity from Tovar was in response to a poll showing that “28% of consumers surveyed had an unfavorable view of Walmart.” Believing this to be evidence of the company’s success, the flack claimed he was “pretty sure any corporation, politician and even media outlet would like to have a 72% favorability rating.”

Further down the “fact check” Tovar cited a 2006 Slate article written by current White House chairman of the Council of Economic Advisors Jason Furman to counter the claim that Wal-Mart’s stock price would be unaffected if it raised employee wages. Furman’s piece doesn’t make this argument. Instead it posits the dubious benefits of Wal-Mart’s low prices for American consumers.

In fact, a Politifact post citing Wal-Mart quotes Furman stating, “like other retailers and employers of less-skilled workers, does not pay does not pay enough for a family to live the dignified life Americans have come to expect and demand."

Pay these facts no mind. Wal-Mart wishes our attention were focused elsewhere.

Tovar would like us to know the company is hiring lots of veterans -- he does not state what they are paying these vets. And did you know the company’s foundation gives away a laudable billion dollars plus a year to some very deserving organizations? By any measure this is a substantial sum, sure to do a tremendous amount of good for its recipients. However, that statistic should also be put in proper context. In 2013 Wal-Mart had net sales of $473 billion and spent $12.8 billion on “dividends and share repurchases.”

The “fact check” also notes Wal-Mart is going to spend $250 billion over the next 10 years buying American-made products. That’s a positive development, not only for the companies that manufacture these goods, but also for an American supply chain that needs to be rebuilt after years of being decimated by imports. At the same time, it’s a drop in the bucket -- averaging out over 10 years to 5 percent of the company’s net sales.

Most upsetting about David Tovar’s screed is the missed opportunity it represents. Wal-Mart isn’t going away and any conversation about wages, manufacturing and the reliance on public benefits by the employees of America’s largest corporations is ultimately going to include its participation. This latest salvo seems to indicate it remains intent on making it as unproductive a conversation as possible.