"Snowpiercer": Movie of the year, at least so far

The 99 percent fight back aboard a train to nowhere, in a dazzling action flick that's also a political parable 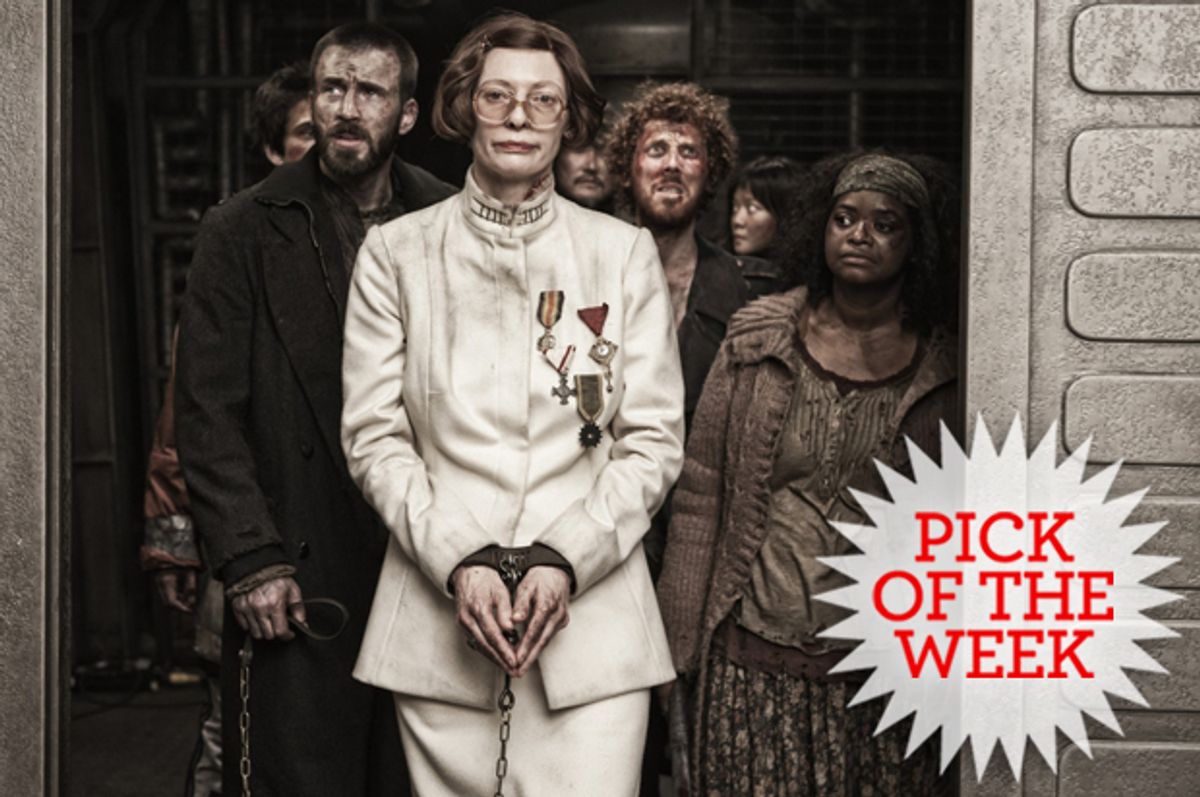 “Snowpiercer,” the first English-language film from Bong Joon-ho, Korean director of the international monster-movie hit “The Host,” gets off to a creaky start. It has a paper-thin comic-book premise whose logical consistency is best not examined too closely, and opens with one of those science-fiction information downloads, a pileup of simulated news footage and voice-over to explain how we arrived at the apocalypse. In this case, an effort to combat global warming has gone badly wrong, and the planet is trapped in a deadly deep freeze. Life on earth has apparently been extinguished, except for a handful of passengers packed onto a sort of rolling ark, a high-speed train that generates power as it circumnavigates the frozen globe.

So this is an elaborate dystopian parable and socioeconomic allegory, a horizontal caste system something like the Titanic on steel wheels, with an oppressed proletariat confined to the rear cars while the oligarchic rulers live in comfort, closer to the engine. Too elaborate by half, probably – but it’s what Bong does with that parable that makes the relentless, politically provocative and visually spectacular “Snowpiercer” the best action film of 2014, and probably the best film, period. This is a gripping and beautifully integrated adventure, not a star film, but Bong gets sensational work from a cast that features “Captain America” star Chris Evans as the train’s rebel leader, John Hurt as his aging mentor and Tilda Swinton as a hilariously dreadful factotum tasked by the train’s distant rulers with enforcing discipline and quelling dissent. (The terrific ensemble also includes Jamie Bell, Octavia Spencer, Ed Harris and Ewen Bremner.)

Asian genre filmmakers have a mixed record on this side of the Pacific, at best. One could write a dissertation on the checkered Hollywood career of John Woo, and someone probably has. It would have been much better for the legacy of “Oldboy” director Park Chan-wook if some trusted friend had told him to destroy all prints of the silly and lugubrious “Stoker.” Maybe it’s just snobbishness that leads me to conclude that Kim Jee-woon’s Arnold Schwarzenegger vehicle “The Last Stand” is a whole lot worse than the unhinged action films he made in Korea, but I don’t think so. Bong's story, at least so far, is very different. After an extended battle with Harvey Weinstein, who wanted to make extensive cuts in "Snowpiercer" to make it more accessible to American audiences, the director's approved 126-minute version will be the only one released in the United States. Despite its big-budget special effects, "Snowpiercer" has a distinctly independent sensibility and an international pedigree (it’s defined as a Korean-American-French-Czech co-production, and was largely shot in the Czech Republic). Bong, who co-wrote the screenplay with Kelly Masterson (based on the French graphic novel “Le Transperceneige” by Jacques Lob, Benjamin Legrand and Jean-Marc Rochette), displays some loyalty to his roots, working in juicy supporting roles for Korean stars Song Kang-ho and Ko Ah-sung as a father-daughter team of drug-addicted daredevils, whose communication issues with the Anglophone passengers becomes a running gag.

After close to 15 years of locomotion around a lifeless planet – the nominal time period is the 2030s -- life aboard Snowpiercer has assumed certain rhythms, and one of those is the persistence of class warfare and periodic outbreaks of resistance. As in the unfrozen world we live in, only violence by the poor against the rich is described as dangerous, while violence delivered the other way around is the normal course of events. In the filthy, overcrowded rear cars where Curtis (Evans), Edgar (Bell) and the cryptic, prophetic elder statesman called Gilliam (Hurt) are confined, anger is building toward another uprising. (Yes, the name of Hurt’s character is certainly a tribute to the director of “Brazil,” who will surely appreciate this movie.) Children are being kidnapped and taken forward for unknown purposes, and the general misery level has created what a Marxist might call revolutionary conditions. People are not literally starving, but they’ve reached a point when dying for the cause of freedom seems preferable to continued life in slavery.

This uprising, Curtis believes, must go further than gaining privileges or reforms, like the mysterious gelatinous ration blocks won by earlier rebels, but must fight forward, car by car, and finally capture the engine. This means seizing the means of production in the most literal sense, since the power of Snowpiercer’s nuclear-reactor engine supplies the light, heat and water that keeps the passengers alive. (Where do those Jell-O-like protein blocks come from? Oh, don’t worry, you’ll find out.) As in any revolution, there are various questions Curtis and his comrades haven’t asked or answered. What will they do with power once they get it, and how much mercy will they show to the present regime? What spy or mole, somewhere in the front of the train, is sending them helpful hidden messages? Why was Gilliam, once one of Snowpiercer’s engineers and designers, banished into Trotsky-like exile some years ago by Wilford, the train’s autocratic, never-seen ruler and founder?

You can view “Snowpiercer” primarily as a kickass action movie with a dramatic, claustrophobic setting that will keep you on the edge of your seat through the shootout-at-a-dance-party conclusion (the memorable production design is by Ondrej Nekvasil and the cinematography by Hong Kyung-pyo, using honest-to-God 35mm film). Or you can read it as a dreamlike and satirical allegory on the nature of power and the hidden pitfalls that come with any collective struggle for justice. Revolutions tend to have charismatic leaders at the helm, and history teaches us how that is likely to end up. Curtis and his troops move forward and upward through the train, the landscape growing more surreal and paradisiacal with every opened door: One car is a flower garden, another a high-end sushi bar, another a glassed-in aquarium, a fourth a classroom where the children of the elite are indoctrinated to rule. As the rebels dwindle in number, suffering and inflicting death and destruction, the question of what they are fighting for and what they will find at the end of their journey becomes increasingly unclear.

I do not mean to imply that “Snowpiercer” is ultimately nihilistic, or that it suggests (as does Swinton’s character) that everyone is better off accepting their lot, and the poor must suffer because that’s the way of things. This may be the most ambitious and capacious dystopian critique since “The Matrix” 15 years ago, and it’s one that seeks to offer a hopeful and even transcendent vision. But such things cannot be purchased cheaply, as even Katniss Everdeen understands after her adolescent fashion. The great triumph of “Snowpiercer” may lie in its final and tragic understanding that if we are ever to escape our train of planetary destruction, our delusional consumer paradise built on the suffering of many, the price will be more than most of us are willing to pay.