"A Hard Day's Night": The rock musical that made history 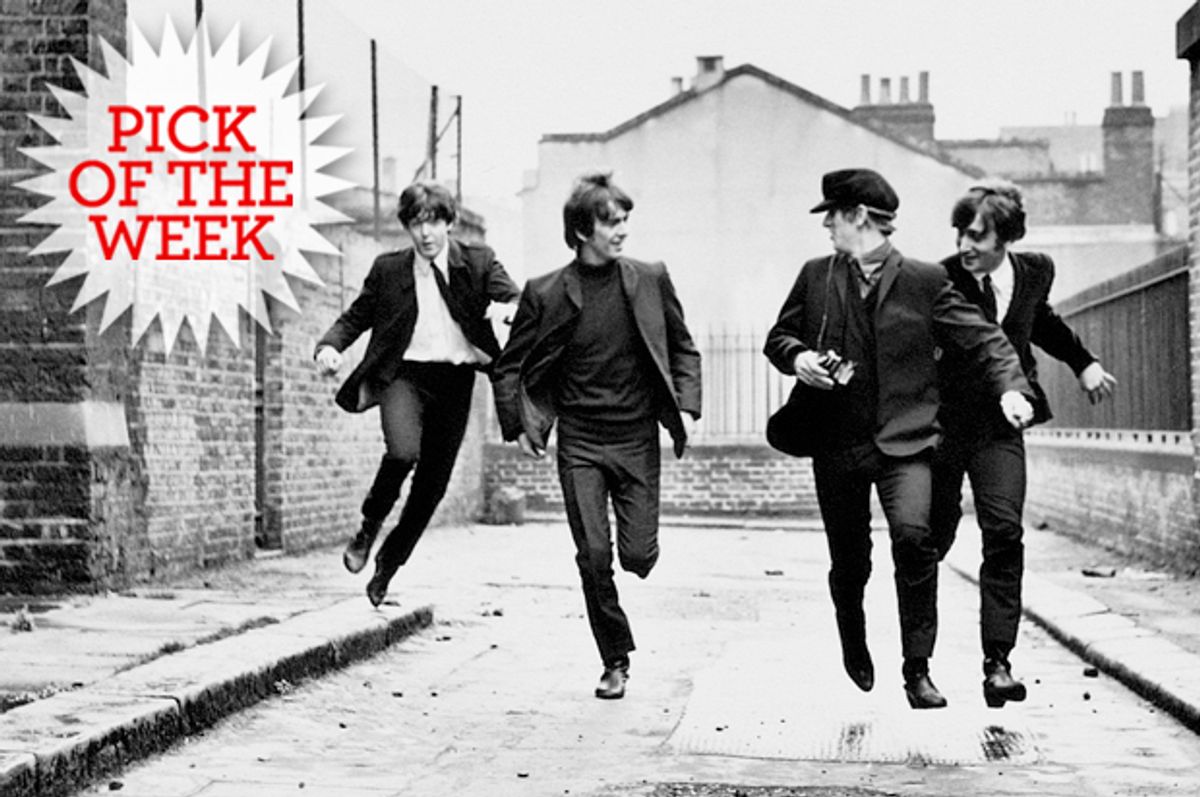 There were two black-and-white films of the early 1960s that captured the incipient generational rebellion that was about to boil over. Both of them had immense ripple effects throughout art and pop culture. Both were cheaply made but innovative, with unorthodox camerawork and adventurous editing that drew on the tradition of experimental cinema. Both captured the slightly depressing physical environment of a European capital that hadn’t quite recovered from the war, and both put their brash, insouciant characters front and center and paid little attention to plot. Both also captured a social world that was just being born: Their heroes belonged to an international, Americanized consumer culture that was sweeping away Europe’s bad memories, and they viewed the old-fashioned morals of the generation that had fought the war with undisguised scorn.

The first of those films, and the one more likely to be discussed in classes on cinema history, is Jean-Luc Godard’s “Breathless,” a sensual, nihilistic tale of a gun-toting gangster and a rootless American girl that was shot on the streets of Paris in 1960. I’m not the biggest fan of “Breathless” as a movie, but that doesn’t matter; its influence on three generations of filmmakers has been profound. Godard took a familiar trope of American B-movies – the bad boy and the good girl – and recast them for a new world and a new era. Every subsequent movie about a reckless and self-destructive young couple seduced by their own sexiness and simply not giving a damn partakes of “Breathless,” whether it knows it or not.

I would argue, however, that the second of those movies – the less respectable one, although its reputation has definitely improved in recent decades – had a much wider and deeper influence that went well beyond film and film culture. That was “A Hard Day’s Night,” conceived as a quickie novelty item for a suddenly popular rock ‘n’ roll band from Liverpool and shot on the streets of London in 1963, guerrilla-style and in chaotic circumstances, by the American expatriate director Richard Lester. It wasn’t as if Lester and the Beatles invented the rock musical. They had clearly seen “Jailhouse Rock” and Elvis Presley’s other films, and were trying to so something in a similar vein that felt more British and had a bit more attitude. On the way to that destination, they invented an entirely new genre, distilled the “Swinging London” moment and created a half-accidental work of surrealist genius.

There’s really no way to list all the things that come out of “A Hard Day’s Night,” beginning with the public personas of Bob Dylan and the Rolling Stones (D.A. Pennebaker’s 1967 Dylan documentary “Dont Look Back” is pretty much a sequel with an American star) and the celebrity fixation of Andy Warhol, and moving through the entire history of MTV and VH1 to, I don’t know, the latest commercial starring One Direction and whatever the former members of Wu-Tang Clan are up to. In playing themselves as a quartet of smartasses who deride old people and take nothing seriously, John, Paul, George and Ringo delivered a primer on how to be famous in the era of commodity capitalism that endures to this day. There’s a scene in the film where George Harrison accidentally winds up in the office of a supercilious marketing consultant – a guy who’s packaging and selling youthful rebellion – that has as much self-awareness as anything in “House of Lies” or “Entourage” or whatever meta-celebrity reality show you care to name.

As strange as this appears at first glance, the generational rupture represented by the Beatles in “A Hard Day’s Night” remains the template for all succeeding generational ruptures. However much millennials may complain about Gen-Xers or boomers or whomever, the cultural divisions between those groups is more a question of microclimate, of specific markers and events, than of an unbridgeable gulf. Sure, the business-suit wardrobes worn by the Fab Four in the movie’s awkward early train scenes look antique – but the form-fitting lightweight suits they wear for the closing performance of “She Loves You” would be a smash on the streets of London right now. More to the point, the Beatles had crossed the invisible line drawn in the cultural sand sometime around 1955, the one dividing modernism from postmodernism. Paul McCartney was born roughly three decades after Frank Sinatra and three decades before Eminem, but those distances are not equivalent. Slim Shady and the Beatles both belong to what Casey Kasem called the “Pop Era,” while Ol’ Blue Eyes stood for the old order it had overthrown.

Amazingly enough, this year marks the 50th anniversary of the first release of “A Hard Day’s Night,” and to mark the occasion Janus Films and the Criterion Collection are releasing a glorious new 4K digital restoration with a remixed and remastered soundtrack produced by Giles Martin (son of longtime Beatles producer George Martin). The movie certainly hasn’t looked or sounded this good since 1964 – I can remember seeing a scratchy, dirty, squawky print at some point in the ’80s – and the net effect is one of wonder and revelation. Two of the four Beatles are long dead and those screaming tween girls in their audience are collecting their pensions, but the movie delivers a tremendous jolt of youthful energy, a combination of cheerfulness, cynicism and pop transcendence that’s much greater than the sum of its parts.

It must be admitted that the four Beatles simply couldn’t act at all, at least at that point, and that every scene with more than a minute’s worth of dialogue risks becoming painful. (The best of them is probably the much-maligned Ringo Starr, who had a certain natural gift for slapstick.) That was exactly why Lester and screenwriter Alun Owen restricted the characters of John, Paul, George and Ringo to delivering one-liners; they couldn’t be trusted with longer speeches or realistic conversation. But necessity, as they say, is the mother of invention, and Lester ultimately conceived the film as a series of brilliantly edited action sequences and musical numbers, which have little or nothing to do with the ostensible plot. The famous opening shot of the Beatles fleeing from a posse of girls, when Ringo and George tumble over each other and John bursts out laughing, was an unscripted accident that set the tone.

Each of the five musical numbers in “A Hard Day’s Night” is memorable (and none even tries to be naturalistic), but it was the two in the middle that essentially established the parameters of the music video. On board the train from Liverpool to London, the four lads embark on a card game that mysteriously morphs into a killer rendition of John Lennon’s song “I Should Have Known Better.” Instruments appear in their hands, girls show up from nowhere to shimmy along, and Wilfrid Brambell, in the stage-Irish caricature role of Paul’s grandfather, bops his head, converted to the gospel of rock like every uptight old white guy in every music video ever. It isn’t the first moment when Lester overtly violates the conventions of realism, but it’s the first one that feels completely unavoidable, and from that point forward all bets are off.

Even more famous is the breakout scene set to “Can’t Buy Me Love,” when the four mop-tops flee from the TV studio where they’re scheduled to perform and cavort in an empty athletic field that’s obviously not in the same place. Lester shot them coming down a staircase from below, jumping off a construction ladder (in forward motion and in reverse), switched from normal speed to fast motion and back again, and included a 26-second helicopter shot. (It’s the same helicopter the Beatles use to flee their fans in the final scene; at this budget level, if you hired one of those things for a day, you were damn well gonna use it.) Although it’s sometimes claimed that this scene is edited to the beat of the song, the opposite is true: The cuts bear no relationship to the song’s rhythms and the images make no attempt to illustrate the lyric, a crucial lesson that MTV videomakers took years to catch up with.

In this digital restoration, every drop of sweat and all that mediocre English dentistry is almost distressingly clear – and the final musical performance before those screaming schoolgirls is cranked up and distorted, as it was meant to be. It’s partly true that “A Hard Day’s Night” is entertaining and revealing even when it doesn’t work – there’s the weird anti-Irish dynamic around Brambell’s character, and the much-discussed homophobic hints about John’s sexuality – but ultimately this is a pop masterwork that captures a cultural turning point, not a camp artifact. In its lack of pretension and its eagerness to please, one could say that “Hard Day’s Night” lacks the purported depth and cool veneer of “Breathless.” But that’s not really even true. I mean, who’s that in the background of the nightclub scene, dancing to “All My Loving”? Is it really 17-year-old Charlotte Rampling, junior London socialite and future star of “The Night Porter” and “Swimming Pool” (and “Dexter,” for that matter)? It is indeed.

The 50th-anniversary restoration of “A Hard Day’s Night” opens this week in many North American cities. It’s also available in a new DVD/Blu-ray release and on-demand from the Criterion Collection.