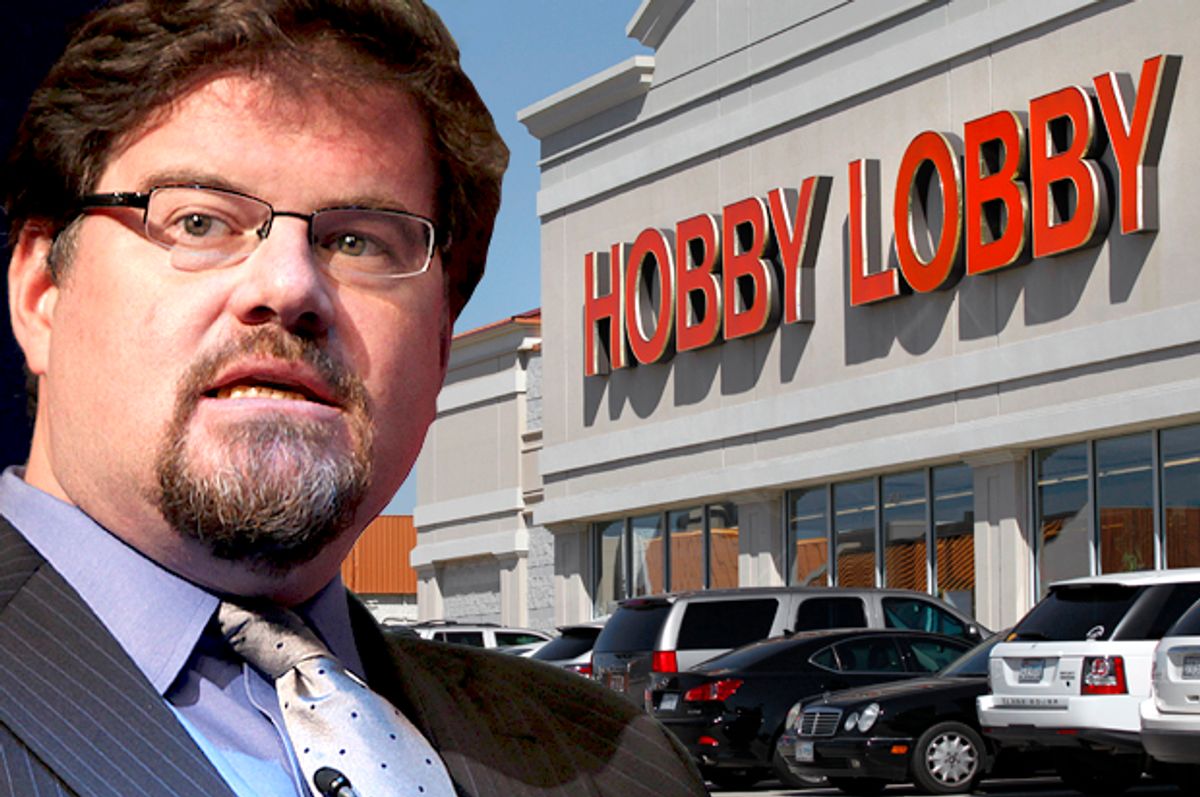 The sheer volume of really terrible and inaccurate responses to the Supreme Court decision in Burwell v. Hobby Lobby Stores, Inc. has been kind of astonishing. Every few hours, a new piece of conservative flotsam washes up and demands to be taken seriously. They all go something like, "This is a victory for religious freedom. You can't make your boss foot the bill for your choices. Contraception is 'recreational,' not medical. Cave man mad grumble sexual intercourse grumble procreation grumble." It seems that nothing gets the right riled up quite like a victory for corporate personhood and the tantalizing prospect of punishing and humiliating women.

On Fox News, Bill O'Reilly and Megyn Kelly tried to see who could out-ignorant the other by shouting misinformation about how birth control works and the supposedly narrow scope of the ruling. Also on Fox News, Jesse Watters said some nonsense about "Beyoncé voters" who want "free birth control" while Brit Hume concluded -- with zero supporting medical evidence -- that the four forms of contraception no longer covered by Hobby Lobby "amounted to abortion." (They do not.)

Jonah Goldberg -- editor at the National Review Online and its most serious writer -- can't understand why "16 kinds of birth control" aren't enough for these mooching women.

Goldberg's piece is kind of emblematic of the entire conservative enterprise of being super-wrong about employer health insurance, the medical necessity of contraception, the human necessity of having sex for non-procreative reasons and the larger question of access to reproductive healthcare, so let's look at it and take it apart and hope that people stop repeating this banana brain garbage because man oh man am I sleepy and hungry after reading the 14 millionth person to regurgitate these talking points and pretend they are original thoughts.

First, Goldberg argues that "there is no Obamacare contraception mandate." Well, there is a contraception requirement included in the new healthcare law. It may be increasingly easy to opt out of because it is filled with loopholes, but it exists. So that dispenses with that! Reality: 1; Goldberg: 0.

Moreover, Hobby Lobby never objected to covering birth control per se. It already covers 16 kinds of birth control for its employees. But it objected to paying for what it considers to be abortifacients, which don’t prevent a pregnancy but terminate one. The pro-abortion-rights lobby can argue that “abortion” and “birth control” are synonymous terms, but that doesn’t make it true.

In a funny way, Goldberg is right that Hobby Lobby never objected to covering birth control -- that is, until it became a politically expedient way to strike a blow to the Affordable Care Act, grandstand about religious liberty and expand its power over its employees. Prior to its lawsuit challenging the requirement, Hobby Lobby's employer insurance covered all forms of contraception, including Plan B One-Step, ella and the hormonal and copper IUD. But once the Green family started picking apart the coverage, they started objecting to covering birth control. It's that simple. Because the four methods of contraception it contested are birth control; they have nothing to do with abortion. This is not some liberal talking point, this is actual physiology and medical consensus. It makes some people mad when you actually let facts get in the way of a real good temper tantrum about reproductive health, but that doesn't change anything about how contraception works. As I've pointed out before, there are medications that women can take to terminate their pregnancies. They are safe and widely used and should be covered by all insurance plans. But Plan B One-Step, ella and both versions of the IUD are not the same thing as a medication abortion.

And as for why women need all 20 forms of birth control? Well, because they pay for them already, they're all necessary healthcare and bosses shouldn't be able to dictate what employees do with their wages. Which leads me to Goldberg's next point, which is that Hobby Lobby "objected to paying for" these forms of contraception. The contraception included -- or that used to be included -- in Hobby Lobby's insurance plan is not a gift bestowed upon its workers by a benevolent company. Insurance is part of a compensation package; it is part of your salary.

Here's Jodi Jacobsin at RH Reality Check nailing Goldberg on this exact point a full year before he wrote his grumpy and misinformed column:

Claiming that the services for which women are covered by virtue of their labor and their earnings are “free” feeds into a narrative persistently cultivated by the far right that taxpayers and the government are footing the bill to expand services “for free” to people who did not earn these. It simply is not true.

Goldberg also ignores the fact that if Hobby Lobby wanted to, it could stop providing insurance to employees and pay the costs associated with opting out of that coverage. But it didn't want to do that, and instead fought for an à la carte approach to observing federal law. Now why would it do that? Oh, I guess maybe because the deduction for employer-provided coverage is the single largest tax expenditure in the federal budget and allows Hobby Lobby to remain competitive by offering benefits while shifting a sizable amount of this cost burden to the government. But sure, call it an act of benevolence if that suits you.

Finally, Goldberg decides to get colorful in his attempt to argue that contraception is not basic healthcare:

If I like to dress up as a character from Game of Thrones on weekends, pretending to fight snow zombies and treating my mutt like she’s a mystical direwolf, that’s none of my employer’s business. But if I ask my employer to pay for my trip to a Game of Thrones fan convention, I am asking him to make it his business. If my employer refuses, that may or may not be unfair, but it’s his right. If, in response, I go to the convention and have the government force my employer to pay for my travel, that only makes things worse. It not only makes my private pursuits my boss’s business, it makes them the business of taxpayers and a bunch of bureaucrats in Washington.

We've already dispensed with this idea that employers pay for such things in a way that is distinguishable from how it pays employee wages, but let's take a look at this wonderfully current comparison that shows just how fun and not stuffed up and hip to the stuff Goldberg is. Is comprehensive health insurance like "Game of Thrones" LARPing? Let's try to figure this out together.

I guess, if you really get down to it, basic medical care and "Game of Thrones" LARPing are not similar at all or in any way! And I guess, if you really want to get down to it, Jonah Goldberg is a real tool-bag mush brain for trying to argue that being able to make decisions about how you spend your wages and how you make healthcare decisions is the same thing as going to Comic-Con, or that a Supreme Court ruling sanctioning wholesale discrimination against women workers is some kind of victory for religious liberty, or that birth control is really that expensive and women should stop being so entitled.

Can we please be done with these arguments now?