Why you should root for Colombia to win the World Cup

Searching for a new team to support now that the U.S. has been eliminated from the tournament? Look no further 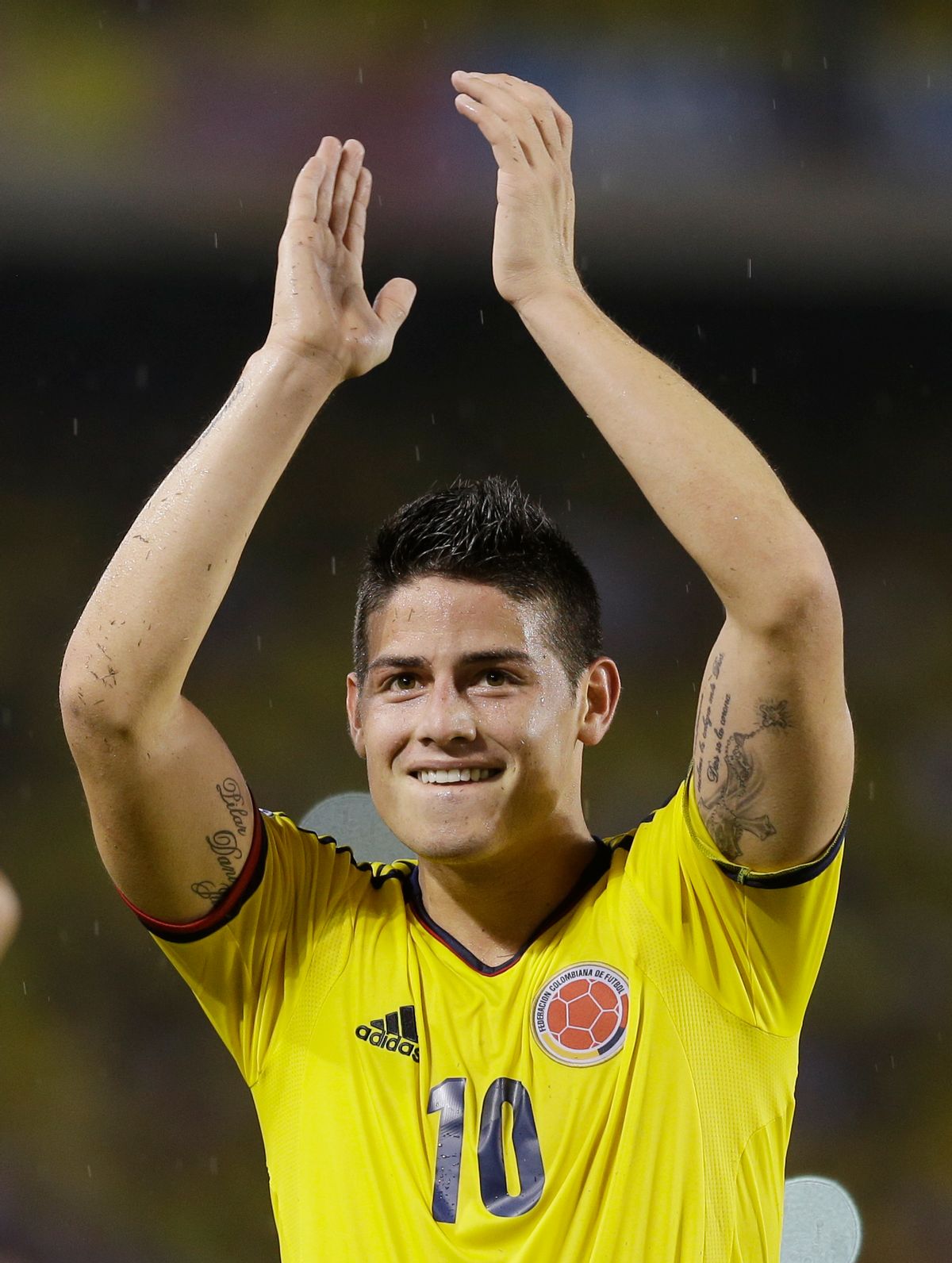 BOGOTA, Colombia — It's been so long since Colombia last played in the World Cup that today's national soccer team players barely remember those dispiriting matches.

The team's marquee member, midfielder James Rodriguez, was only 8 when his country's side, known as "Los Cafeteros" (the Coffee Men), was quickly eliminated from the tournament in France in 1998.

That's why the entire nation is reveling in its winning streak at the World Cup in Brazil. The team handily won its first four games and has, for the first time ever, advanced to the quarterfinals with a showdown with Brazil in Fortaleza on Friday.

In addition, Rodriguez, now 22, has emerged as the breakout talent of the tournament. He has notched five goals — more than Argentina's Lionel Messi, Brazil's Neymar and Germany's Thomas Muller — and is credited with one of the World Cup's most spectacular strikes in Saturday's game against Uruguay.

His back to the net, Rodriguez caught a pass with his chest at the top of the penalty area, then shocked the goalkeeper by twisting around and blasting a left-footed shot that banged off the crossbar and in. Uruguay was already reeling from the suspension of star striker Luis Suarez for biting an opposing player and Rodriguez's no-look stunner seemed to break the team's spirit.

"We are making history," Rodriguez told reporters after the game.

Back in Colombia, his goal set off celebrations. When the ball went in "a chill went through my entire body," said law student Alvaro Barrero, one of thousands of fans who watched Los Cafeteros' 2-0 victory over Uruguay on a giant outdoor screen set up in a Bogota park.

Rodriguez and his teammates have also found glory on the sidelines in Brazil. After each goal, the team performs choreographed dances to celebrate. Their best moves have been compiled and set to music on YouTube.

This outpouring of joy contrasts with Colombian soccer's painful past.

In the 1980s and '90s, drug kingpins financed several of the country's professional teams as a way to launder money — and scratch their soccer itch. They provided a huge monetary boost for some teams, like America de Cali, allowing them to sign top talent from around Latin America. America de Cali, it turns out, was underwritten by Miguel and Gilberto Rodriguez Orejuela, the leaders of the now-defunct Cali cartel.

"When I was coaching America de Cali, the team had a president. But everyone in the country, everyone in Cali, everyone on the team knew that the guy who ran things was Miguel Rodriguez," said Francisco Maturana, who went on to coach Colombia's national team in the 1990s, in a documentary film about cocaine traffickers and Colombian soccer.

This criminal influence perverted the game. Cartels and gambling syndicates often leaned on players and referees to throw matches. Colombia's 1989 professional soccer season was canceled following the murder of a referee, while a soccer association president was imprisoned for drug-related crimes.

Then there was the Coffee Men's infamous performance at the 1994 World Cup in the United States. The star-studded team, which included Carlos "El Pibe" Valderrama, Freddy Rincon and Faustino "El Tino" Asprilla, was coming off a 5-0 victory over Argentina in a qualifying play and seemed like a powerhouse. Brazilian legend Pele picked the Colombians to take home the trophy.

Instead, Colombia faltered. Several players received death threats from back home, which seemed to affect the team's performance. In a stunning 2-1 loss to the US, defender Andres Escobar accidentally knocked the ball into Colombia's net for an own goal. Colombia was eliminated — and a week later, so was Escobar.

On July 2, 1994, Escobar got into a shouting match with patrons at a bar in his hometown of Medellin. The drunks taunted the player with shouts of "Own goal! Own goal!" When Escobar protested, he was shot six times.

The case remains shrouded in mystery. But the shooter, who confessed and served 11 years in prison, was a bodyguard for a cartel member. Many Colombians believe the killing was ordered by drug lords who had bet heavily on Colombia to advance at the World Cup.

Whatever the motive, the Escobar murder was a national disgrace for the sport and for Colombia, which seemed to be unraveling amid drug-fueled violence.

But over the past two decades, the country has undergone a dramatic metamorphosis. The big cartels were dismantled, Pablo Escobar was gunned down and the Rodriguez Orejeula brothers were imprisoned. Although drug trafficking continues, it is now carried out by smaller organizations that maintain low profiles and are less threatening. In addition, the Colombian government is negotiating a peace treaty with drug-trafficking rebels that could bring an end to 50 years of guerrilla war. All this has led to a steep drop in kidnappings, murders and other violent crime.

Meanwhile, soccer is on the mend. Investigators say that pro teams have largely cut their ties to the criminal underworld. Last year, for example, America de Cali was removed from the US Treasury Department's list of Colombian narco-linked businesses.

David S. Cohen, the department's under secretary for terrorism and financial intelligence, called the decision on America de Cali "a testament to the enormous efforts made by both the team and the Colombian government to completely break with the criminal influences that have overshadowed the team in the past."

A new generation of talent has also emerged. Colombian coaches guided Costa Rica, Ecuador and Honduras to this year's World Cup, with Costa Rica advancing to Saturday's quarterfinals matchup against The Netherlands.

Colombia's team is back in the World Cup for the first time in 16 years thanks to standouts like Rodriguez, Juan Guillermo Cuadrado, and Radamel Falcao, the team's dynamic striker who's sitting out the tournament due to an injury. Most of these young guns are in their early 20s, prompting the Bogota newsweekly Semana to declare: "These legs are going to be around for a while."

Of course, fans here can still get a little too passionate about the game. After Colombia defeated Greece in its World Cup opener, drunken revelers were involved in 3,000 fights that left nine people dead. That's prompted authorities to ban alcohol sales in some cities when Colombia plays, and the dry law appears to be working: Recent celebrations have been mostly peaceful.

So, how long will the party last? Host-nation Brazil has won the World Cup a record five times and Colombia enters Friday's game as the underdog. But the team is playing so well that some odds-makers are now predicting an upset.