The myth of the old fogeys: Why the Supreme Court is tech-savvier than people think

SCOTUS gets a bad rap where technology is concerned, but recent decisions show that's not quite true 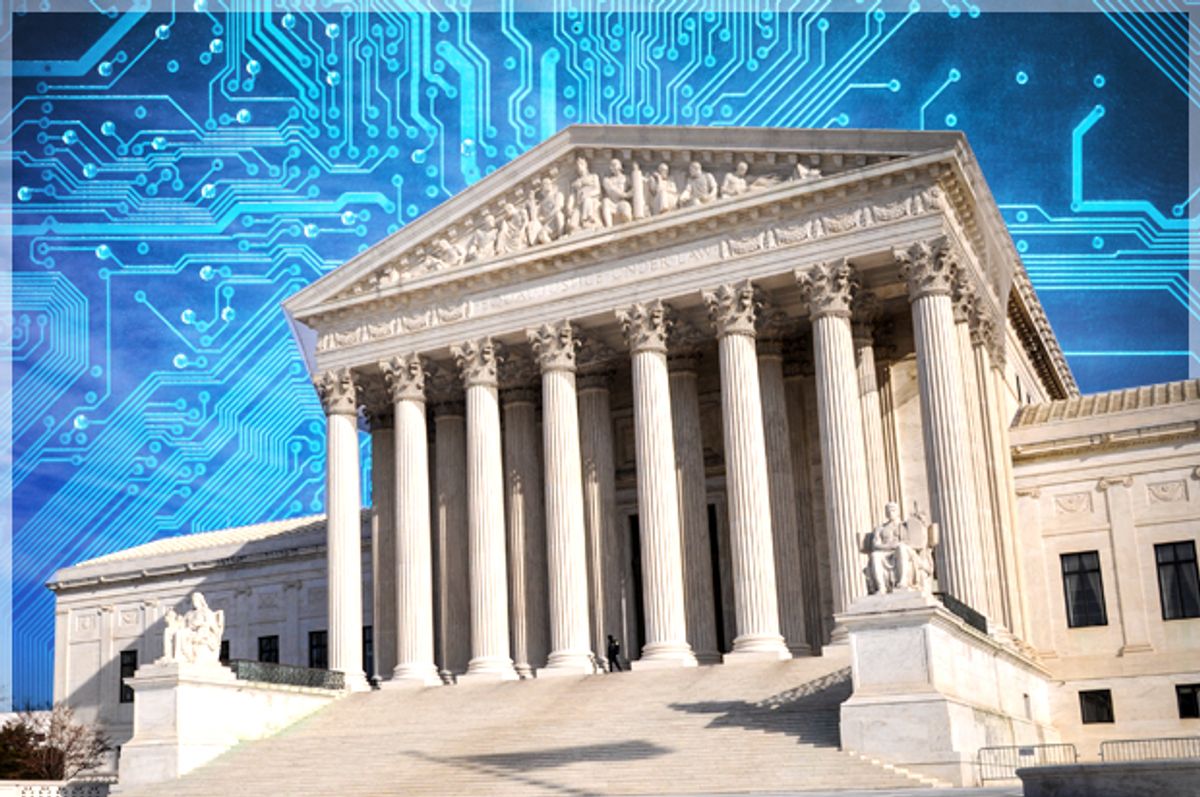 It’s become fashionable, of late, to bemoan the supposed technological incompetence at the country’s highest court. “Black-robed techno-fogeys,” laments one article; “everyone … inside that courtroom is most likely an incompetent Luddite,” proclaims another; and a third purports to rank the justices by technological incompetence. The court certainly doesn’t do itself any favors, with a website reminiscent of the late 1990s, a well-known aversion to email communication, and more than one embarrassing gaffe during oral arguments.

But all those things are tangential, of course. At the end of the day, what matters is the quality of the legal reasoning in the court’s opinions and whether it accurately reflects technological reality — not whether Sonia Sotomayor knows that “Netflix” is plural or that “iCloud” doesn’t take an article. And in the waning days of the court’s most recent term, three cases came out that amply demonstrate that when it comes to applying the law to emerging technology, the court knows exactly what it’s doing.

Take Riley v. California, a Fourth Amendment case about whether, if you're arrested, police can rifle through your cellphone without a warrant. Since 1973, the settled rule had been that if you're arrested, everything on your person is fair game. After all, the court had reasoned, you could have a weapon on you. As against the prerogative of officer safety, the court decided that the invasion of privacy was relatively minimal. And rather than require police to make on-the-spot determinations of what might or might not contain a weapon, the court issued a bright-line rule that anything on a suspect's person could be searched incident to arrest — even a cigarette case.

So the stage was set for the government to argue, in Riley, that cellphones were “materially indistinguishable” from any physical object — say, a diary, or photos in a wallet — that might be found on an arrestee's person. But the court saw things differently: “That is like saying a ride on horseback is materially indistinguishable from a flight to the moon.” While the occasional suspect in 1973 might be arrested carrying a diary, everyone carries a cellphone today. And cellphones are diaries, and photo albums, and all our letters, and much more besides. On top of that, cellphones can access information in the cloud — not on the arrestee's person at all. For all these reasons, the court held, the old rule did not extend to cellphones.

After the oral argument in Riley, predictions were dire. But, as professor Orin Kerr has noted, in both this case and United States v. Jones, a 2012 case about GPS tracking, the government failed to procure a single vote at the court. Although the court can be reluctant to render a decision on the merits in tech privacy cases, when it does, it understands perfectly how applying an old rule to new technology can upset the established equilibrium.

The other two tech cases this term were both in the area of innovation policy — copyright and patent law, where the court has often been prescient about technology. Alice Corp. v. CLS Bank concerned software patents, a tough nut to crack. Many software companies and computer scientists believe software should be simply unpatentable, and the evidence shows that the recent burgeoning of patent trolls is largely the result of software patents. At the same time, there are thousands of software patents out there, and legitimate businesses also rely on the protection that they confer. More fundamentally, it's not immediately clear why software inventions should ipso facto not be patentable just like any other invention. The real question is what, exactly, makes a piece of software an invention — a difficult question, because of the inherently abstract nature of software.

In Alice Corp., the court began to give us an answer. The patents at issue all concerned the idea of hedging against counter-party risk — basically, the risk that the other guy will back out of a business deal. To mitigate the risk, both sides complete the transaction through a neutral third party. Justice Kennedy was mocked for asking at oral argument whether the concept was simple enough to be hacked up by a competent programmer in a weekend — but he was basically correct to ask. Like many early software patents, the only “innovation” was the idea of using a computer  — in this case, as the neutral third party. Taking an old idea and implementing it on a computer, the court held, doesn’t count as an invention. Although some have decried the court’s incremental approach to software patents, the ruling was carefully targeted to knock out a large proportion of troll patents while leaving alive the possibility of true innovations that merit protection.

Finally, in ABC v. Aereo, the justices confronted a conundrum. On the one hand, Aereo was quite clearly exploiting a loophole in the law: It took broadcast TV signals from the airwaves and sent them to users — but avoided paying the license fees traditional cable companies pay by having a separate tiny antenna for each user. On the other hand, the way ABC was urging the court to close the loophole — by reinterpreting key settled terms in the Copyright Act, like “perform” and “transmit” — could have had unintended consequences for many other cloud services.

Of the three cases, the court was clearly the least comfortable with Aereo and its potential for screwing up both settled understandings and emerging technologies. And yes, perhaps the justices were a little in the dark about the technology, too. But professor David Post, who co-authored an important amicus brief in support of Aereo, points out that the opinion only concerns itself with the retransmission of broadcast television signals and has nothing to say about services that “deal with the vast array of non-broadcast-TV content.” In other words, Justice Breyer, laudably self-aware of the court’s institutional shortcomings, wrote a painstakingly narrow opinion to close the loophole while leaving key areas of innovation unaffected.

A few commentators in this latest round of court bashing have argued that the real problem in tech cases is with the court’s use of analogy and metaphor. Selina MacLaren writes that “emerging technology is, by definition, about breaking away from history.” Analogizing new technology to past cases, the thinking goes, is a crutch for long-in-the-tooth justices who can’t reason about the technology directly.

This line of argument is deeply misguided. Reasoning by analogy is part of what makes legal reasoning distinctly legal, and the very concept of legality entails continuity with the past. Rules validly made in the past must be followed in the future until those rules are validly changed. And how a rule applies to a given set of facts in the present — including emerging technology — is determined, at least in part, by examining how it applied to a similar set of facts in the past. Without reference to established principles, prescribing rules of conduct is simply legislation. The upshot is that as long as we want our judges to be judges, rather than legislators, reasoning by analogy isn't going anywhere.

That's not to say that there's nothing to see here. Many commentators have recognized that the artful use of metaphor can make or break many tech cases. Indeed, in Aereo, the deciding factor was whether Aereo’s service seemed more like a cable system, providing retransmitted broadcast TV, or more like an equipment provider, providing a tiny antenna on a rooftop down the street. And the government’s theory in Riley depended on the analogy from cellphones to diaries, purses and wallets.

In both cases, the court recognized the utility and the limits of analogy and metaphor. The analogy in Aereo was useful because it helped the court understand Congress’ intent in writing the statute and reason about whether it ought to extend to Aereo’s service. By contrast, in Riley, the analogy no longer fit the reasoning — the privacy violation in searching a cellphone was entirely unlike anything the court had encountered in previous cases. So the court returned to first principles and reasoned its way to a new rule.

Misapplying analogy and metaphor can substitute fact-finding for legal reasoning, but the answer is hardly to eschew them entirely. And the justices may not be techno-wizards at oral argument or chronicle their daily minutiae in tweets and snapchats — but that’s not what matters. (We may even be better off for it.) What matters, at the end of the day, is the quality of the opinions they write and their legal reasoning — whether by analogy or from first principles, whether in tech cases or any other. We could do far worse than the likes of Riley, Alice Corp., and Aereo.