In defense of the hickey

At 33, I'm a bit old for love bites. But I wonder why they entice me so much -- and disgust everyone else? 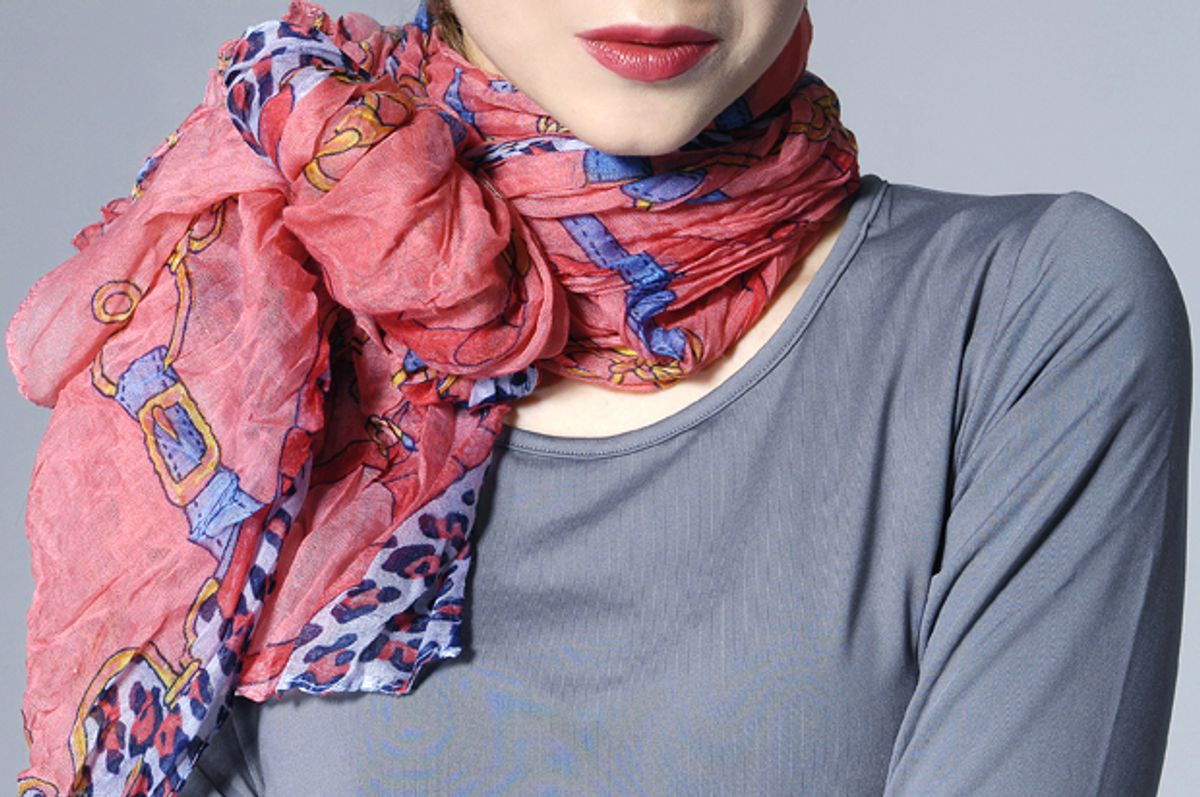 I am too old for hickies. I am a 33-year-old woman. A college professor, searching my bureau drawer for a clean turtleneck to wear to work. I specialize in scarves. Not because I favor them, but because my neck wears a garland of purple blossoms. My chest is a mess of bullet holes, my beloved’s mouth the gun.

The first time we lay together, she pressed her mouth to my neck, opened it, and pulled, unraveling me. I hadn’t been marked by a mouth in years.

“It’s embarrassing,” I said later, “but I love hickies.”

“On my reservation,” she said, splaying her fingers across my throat, “we call them Mojave necklaces.” She laughed, hand sliding down my chest, “you are Indian.” Hickies are so commonplace in her community that some tribal departmental policies stipulate that employees cannot come to work without at least attempting to conceal them. I marveled at the difference; arriving on my college campus emblazoned with love bites is unthinkable. Even as defiant teenagers, we massaged them with frozen spoons, scrubbed them with dry toothbrushes, held icepacks to our necks as if to cool our racing pulses.

Everyone knows that hickies are crass, but for the first time, I wondered why. Is our Puritan history so strong in us that to acknowledge touch for pleasure’s sake is vulgar?

One family vacation when I was 8, I played in the pool with a halved rubber ball. Turned inside out, it would fling into the air with a satisfying pop. Somehow, I managed to suction this apparatus to the center of my forehead.

“Look!” I crowed to my poolside parents. And then, “Ow!” when it popped off of my face and splashed into the water. I rubbed my stinging forehead. When I looked up, my parents dissolved in laughter.

“Oh, honey,” my mother grinned. “Look what you did.” The rubber hemisphere had left a circular crimson bruise in the center of my forehead.

“You’ve got a hickey on your face,” said my dad.

“Well,” my mother said. “Sometimes teenagers like to suck on each other’s necks until they get bruises, like the one on your forehead.”

I gaped, incredulous. “Why would anyone want to do that?”

I discovered my neck at 10. It felt like a secret my body had finally told me. A first drink, a light switch, a doorway where a wall had always been. Tracey Barren’s mouth tore a hole in the hull between my shoulder and jaw, and water rushed in. That pleasure was a revelation: If this, then what?

After baseball practice, on a stray couch cushion in my basement, under an old beach towel, Tracey and I played “Date.” She was always the boy. Her mouth, my neck, sounds of my mother starting dinner upstairs — don’t stop, I said, for the first time.

Desire is so often an urge to consume. The sound of sucking means few things, all of them hungry. It is no wonder, our obsession with vampires, werewolves, flesh-eating zombies. Think of the vampire’s victim, arched in terrified ecstasy. We agree on this fantasy by the billion: devour us, leave us no choice but to surrender. Some kinds of pleasure are closer to pain than others. Under my mouth, my beloved squirms, hips rising, shoulder clenching, her body resisting and yielding at once. Think of the vampire: all measure and seduction until he tastes, all control loosed in the ravening.

Tenderness toward the object of our desire becomes an expression of love partly, I think, because it so defies the nature of want, whose instinct is less to cuddle than to crush. My want is often more gnash than kiss, more eat than embrace. I care dearly for my beloved, and I would kill to protect her, but I also long to close my teeth around her, to unzip my body and pull her into it, or crawl into hers. It is no accident that we go to the pulse. Perhaps there is no true expression of want that does not include destruction. Is every desire an urge to annihilate? I can’t say. But even my tenderness for kittens includes an impulse to put them in my mouth.

Accordingly, my beloved often teases me that I am like a fox. The other day she held up a photograph in a magazine: a red fox, pointed face, yellow eyes embering.

Under this light I both preen and cringe. Like the bite marks on her neck, it betrays and boasts of the wild in me, the animal who so often wins. Maybe this is the same shame the hickey carries.

She has seen these parts of me, maybe she brings them out — how I get too hungry, eat too fast, chew with my mouth open. Jealousy heaves my chest and heats my hands, which sweat so often, those swift conductors of all feeling — both emotive and environmental. My teeth chatter easily, though in sleep my temperature soars, a furnace metabolizing all the day’s suppressed impulses. I feel embarrassed on the mornings we both wake smelling of my metallic sweat, as if my body has betrayed something I try to hide.

Our penchant for hickies betrays other things, too. There are reasons why love bites are the domain of teenagers. For one, amateurism – the first hickie is often a mistake, and one that many never make again. In repeat offenses, there enters an element of braggadoccio – like the guy who breaks the bed and mistakes it for the best sex ever. Look at us, the splotch-necked teens preen, we are wild, we have SEX. Despite its glorification, sex is most novel to its initiates. The hickied teens are gloating about old news to rest of us — their entry into a club whose membership is public.

But my beloved and I share that novelty, in a sense. For the first year of our relationship, she lived (though did not share a bed) with another woman. During the slow process of her separation, our public appearance as a couple was drastically limited. As an adult, I’d never had to hide my affections, and that invisibility, however sensible, stung. Combined with a 2,500-mile distance between us, it made for a difficult year.

But the gloat of hickies irritates us for additional reasons. Much as we worship promiscuous women, we also like to punish them — or those whose sexuality is simply too evident. I was a girl whose body developed early, and my first kisses provoked a reaction that my less buxom peers did not suffer. Today we call it “slut shaming,” though it happened to me before I even had a chance to be promiscuous. But that painful early experience probably contributes to my own pleasure in them now. At 12, I absorbed shame for my body and my desires without much scrutiny. My brazenness now is, in part, restitution for those years.

Though I have to admit, I haven’t always gloried in the sight of others’ hickies. Just as kissing couples sicken us when we are single, so do hickies when we are not satisfyingly sucking behind our own closed doors. It can be that simple. The sex brag, like any brag, is a grab at the power of inciting envy, and it often works.

I read now about adolescents sucking on more obvious parts of each other as part of group activities that seem to preclude the secrecy and innocence of my own unsayable awakening. I don’t so much mourn their lost childhoods. I lost mine at first opportunity, and sex isn’t the only way to do that. But I do remember the vacancy of those earliest, and most obvious sex acts. I met desire under that faded beach towel, to the sound of cleats knocking the cement basement floor. What I mean is, the neck is always innocent. Each of her breaths against it is a revelation, still.

It isn’t only the pleasure, though. I am a woman who likes to be marked, and to mark. Physical evidence is the easiest accounted. I have returned again and again to the painful yielding of tattoos, the bodily notation of everything I want to remember. I count my scars for comfort, and tenderly trace my beloved’s. The things that mark us, make us.

In front of the classroom, I adjust my scarf, then reapply coverup to my neck in the faculty restroom. I hide my hickies, but privately side with the Mojaves, whose hickies seem less brag than honest proof of pleasure. Today, our allegiance to this modesty strikes me as arbitrary, a vestige of historical shame we honor only superficially. Even the word — hickey — is coyly prim, descends from doohickey, any unspecified object. The Russian equivalent, unsurprisingly, is more honest: Zasos is the noun form of the verb, sos, to suck.

We may avert our gaze, but we are no longer a prim culture, and the urge to mark is universal. In myriad cultures, marriage is signified by body modification, and we are no exception; as we brand our cattle, we mark our beloveds with bruises, babies, scars, disease, lipstick and diamond rings.

Our personal history plays a part in this urge, as well. During that first year, when  my beloved lived with another woman, near the end of our visits I would buckshot her neck, shoulders and chest with hickies. Few people will kiss a neck marked by another mouth. At least for the duration of those bruises, I could claim her body as mine alone.

As writers, my beloved and I both know the impossibility of this desire, which is not ultimately to mark or be marked, but to possess and be possessed. I cannot show my lover the force of this want in me. The best I can do is trust that she knows her own. The closest I can come is to press my face to her neck, to find her pulse with my mouth, and open it.