Food Network's major oversight: Why a quest for ratings comes at a price

These fabulous shows have made us a nation of foodies. But are they also cutting the country short? 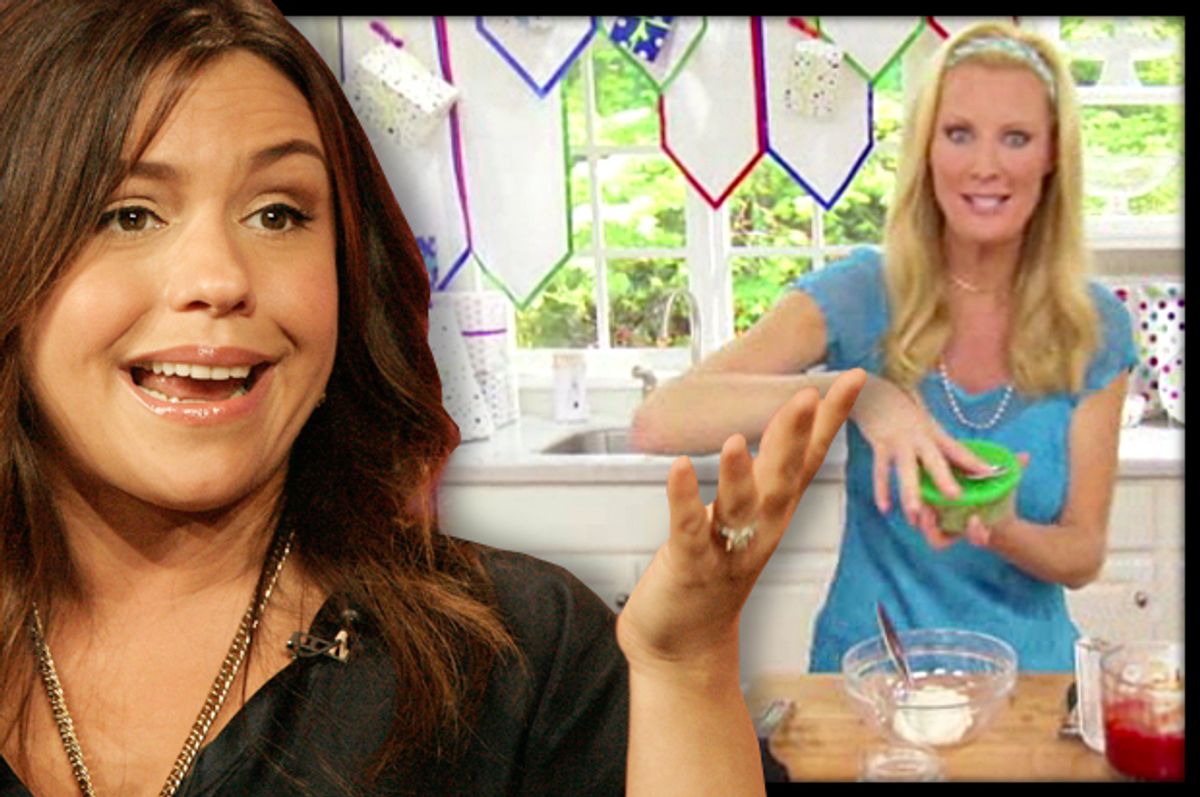 The Food Network has changed the way America cooks. It has turned a broad swath of Americans, me included, into amateur foodies. Much like the popularity of forensic crime shows like "CSI" has changed our expectations of what is required to prove guilt in a court of law, by offering us fantastical representations of the magic and certainty of DNA, the Food Network has increased our expectations and demands of our food choices in areas like flavor, originality and presentation. It’s no secret that those categories approximate the categories by which food is judged on "Chopped," one of Food Network’s biggest shows.

But shows like "Chopped" are part of the problem. And what problem is that? The number of actual chef-centered cooking shows on the network has declined dramatically in the last three years or so.

In the early 2000s, the heyday of Emeril Lagasse, my TV habits included a steady diet of Food Network TV. Every evening around 5 p.m. and every Saturday morning, I watched Rachael Ray’s rise to stardom on "30 Minute Meals," got a good Southern girl fix watching Paula Deen put too much butter in everything, and gave the side-eye to Sandra Lee’s "Semi-Homemade Meals." Though her food seemed exactly like the meals I had grown up eating, where my working single mom mixed packaged foods with fresh foods, a slight food snobbery was emerging for me, as I recognized the benefits of the fresh cooking that Ray, Bobby Flay, Tyler Florence and others were doing.

I also learned what quinoa was watching an episode of Ray’s travel show "$40 a Day." I laughed at the ditzy blond girl who was featured on a show called “How to Boil Water,” and I ran out eagerly to buy to white ramekins after watching an episode of Sara Moulton’s "Cooking Live," in which the theme was 5-ingredient meals. I realized excitedly that I already had the butter, eggs, sugar, chocolate and vanilla extract that would make for a quick chocolate soufflé.  When I recently attempted to re-create my grandmother’s famous pound cake, despite my aunt’s protestations that if I didn’t “do it right it will come out like a brick,” it came out like a dream. And that is in part because an episode of Ina Garten’s "Barefoot Contessa" taught me that I had to let the eggs and butter come to room temperature.

Like so many, Ray was and in many ways remains my favorite. I bought her cookbooks, was heartbroken when I arrived at one of her book signings so late that the line to see her snaked out the door, and cheered for her when she got her own show.  One of my prized gifts is a set of her cookware. Because of her I keep EVOO (extra virgin olive oil) and an assortment of vinegars in my pantry, and can always make my own salad dressings. That may seem normal for so many, but for a working-class black girl from the South, the cuisine I grew up eating was a mashup of Paula Deen and Sandra Lee, which is to say, fattening, rich, processed – and I mostly ate vegetables-- collard greens, field peas, green beans, and occasionally on Sundays, fresh sliced tomatoes -- in the context of soul food dinners

Despite my absolute fandom for the various network personalities, around 2007 or so, I realized that in all the years I had watched the network (about 5 at that point), there had not been one cooking show with an African-American host.

I slowly started to come around to the idea that perhaps I should not give so much time and money to a network that clearly didn’t think  black people cooked. Though things seemed to be changing when I saw a few episodes of a Latino show called "Simply Delicioso" hosted by a Colombian-American woman, Ingrid Hoffman, it was short-lived.

When I first saw Gina and Patrick Neely, a married couple who owned a couple of barbecue joints in Memphis, on an episode of one of Paula Deen’s shows, it seemed clear that the Food Network was thinking again about diversifying. And sure enough, in February 2008, just in time for Black History Month, the network debuted the couple on their own show, "Down Home With the Neelys."

A few months later, their show was joined by "Cooking for Real" with Sunny Anderson, and then shortly after that the winner of Food Network Star Season 4, Aaron McCargo Jr., got his own show, "Big Daddy’s House." From zero to three in a span of about two years, the network was on fire.

They followed up with Latino-inspired cooking shows like "Viva Daisy" and "Mexican Made Easy." And on the heels of winning Season 6 of Food Network Star, the winner, Aarti Sequeira, an Indian woman, had her own show, "Aarti Party."

Yet if you watch the network for any length of time, now, you’ll see only two of those people – Sunny Anderson and Marcela Valladolid, host of "Mexican Made Easy." No longer hosting their own shows, they cook together on a new show called "The Kitchen." The Neelys have unceremoniously disappeared alongside Aaron McCargo Jr. and each and every Latino show.

This weekend when I tuned in for the usual roundup, I saw three individually hosted cooking shows, Trisha Yearwood’s show "Trisha’s Southern Kitchen," "The Pioneer Woman" with Ree Drummond, and "Farmhouse Rules," with a middle-aged woman who looks like a Paula Deen knockoff.  There were also old episodes of one of Rachael Ray’s shows, a new episode of Bobby Flay’s show “BF’s Barbecue Addiction” and an episode of Guy Fieri’s “Guy’s Big Bite.” Other than Sunny Anderson, one of the co-hosts of "The Kitchen," not one other show with a host of color appeared.

It bears noting that the network has significantly pared down all of its cooking shows. The regional and stylistic diversity of shows even among white chefs has decreased dramatically, such that many of my favorite shows over the years have come and gone quickly. In their place, banal reality show cooking competitions proliferate, most probably because they are a ratings draw.

Still, it is an egregious oversight on the part of the higher-ups at Food Network to feed us a steady diet of TV shows hosted by heterosexual white men and Southern white ladies.

Cooking is both a mundane and also a deeply intimate act, something we do on the regular for ourselves and those we love. Nothing is more important than how we think about what we put into our bodies. This network has greatly shaped not only how I cook, helping me to become a far healthier cook than I was reared to be, but it has helped me think about food politics more generally. When I watch hosts of travel shows take on various gluttonous food challenges, like eating a five-pound burrito, I know that this kind of ingestive excess is a direct result of America having access to way more than our fair share of the world’s food supply. When I read the think pieces about how quinoa farmers can no longer afford to buy this staple food of their own diet, I think about how our mediated relationship to food as a commodity hurts others while supposedly helping us to be more healthy. And on a far less serious note, the network has influenced how I think about vacations, since I usually want to re-create at some level the travel experiences of people like Guy Fieri on "Diners, Drive-Ins and Dives." And before I found out about Paula Deen’s racist antics, one of my homegirls and I drove down to Savannah a few years back to visit her restaurant, the Lady and Sons.

I know when I both see and share food pics on social media, that the desire to show off beautifully arranged, presumably delicious food has been shaped immensely by what the Food Network chefs over the years have taught us repeatedly: “You eat with your eyes first.”

And herein lies the conundrum. In all things, race continues to matter. Even how we cook. We Americans pride ourselves on the variety of foods we eat from other cultures, including Chinese, Thai, Indian, Mexican (and Tex-Mex), Spanish, Salvadoran, Cuban, Jamaican and African-American. In a country that is increasingly more brown than white, we have no problem, to invoke bell hooks, “eating the other,” marking our commitments to diversity by the variety of ethnic foods that we put on our plates. Meanwhile, despite the declining popularity of the salad bowl analogy to represent multiculturalism, racial diversity in representation remains deeply unpalatable and unprofitable. Hooks writes: “Within commodity culture, ethnicity becomes spice, seasoning that can liven up the dull dish that is mainstream white culture.” So we are more likely to see Giada De Laurentiis or Bobby Flay cooking “ethnic foods” than we are to see a brown person cooking them.  As diversity goes, it seems to take very little to bring about a feeling of satiety.

The old adage is true. We are what we eat. This is what makes us animals. And simultaneously cultural cannibals. But as nations go, we should aspire to be more than this. And this starts with caring a little less about the food we eat and far more about the livelihoods and possibilities of those who have prepared it.