Is this painting too "pornographic" for a gallery? 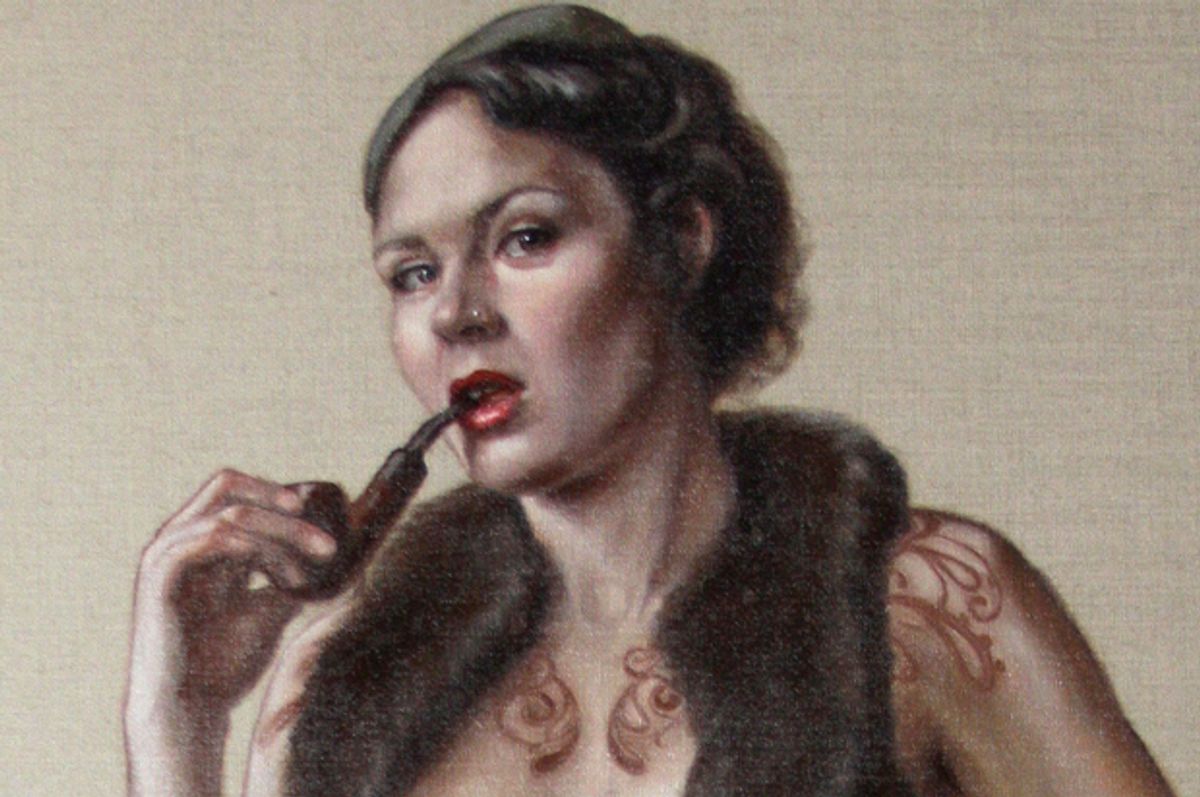 Detail of "Portrait of Ms Ruby May, Standing" by Leena McCall (leenamccall.com)
--

The tattooed woman caresses a pipe between her lips and bears a seductive look in her eye. She wears a low-cut, fur-trimmed vest, and her breeches are unbuttoned to reveal not only that she goes commando, but that she's not a slave to Brazilians either. And there's something there in that painting, titled "Portrait of Ms. Ruby May, Standing," that artist Leena McCall say got it branded "disgusting" and "pornographic" -- and removed from the Society of Women Artists' 153rd annual exhibition at the Mall Galleries.

Was it the pose? Was it the pubes? The Mall Galleries has thus far declined to state the specifics of what got the painting deep-sixed, but issued a statement that "The Mall Galleries played no part in its selection or hanging. As an educational arts charity, the federation has a responsibility to its trustees and to the children and vulnerable adults who use its galleries and learning centre. After a number of complaints regarding the depiction of the subject and taking account of its location en route for children to our learning centre, we requested the painting was removed." But the Society of Women Artists says, "We thought the painting was beautifully executed and the composition was much admired. We saw nothing wrong with it; had we, the piece would not have been selected. We hire the gallery space from the Mall Galleries for the period that the show is on. The gallery took it down without seeking our approval." The exhibit closed Saturday.

The painting appeared at the show's private viewing late last month, where McCall proudly snapped a photo of the painting hanging in the gallery amid several landscapes. She says that the painting of her friend -- who runs sexuality workshops and coaching sessions -- was intended to explore "how women choose to express their sexual identity beyond the male gaze." Ironically, the Guardian reports that the Society "was permitted to replace McCall's work with another less provocative nude: one where the model wasn't tattooed and standing hand-on-hip, all unbuttoned."

The exact nature of McCall's claim that the work was called "pornographic" and the context for her assertion has not been made clear. What is clear, however, is the Mall's stated concern for "children and vulnerable adults" and "complaints regarding the depiction of the subject." Yet what exactly does that mean, coming from a place that says its goal is to "champion new contemporary figurative art by living artists," with an aim to "promote, inspire and educate"? And the Mall's reaction is strange coming from a venue that just this past May included a nude -- and pubes-sporting – painting of Cambridge University don Victoria Bateman in a portrait exhibition, a painting she commissioned because she wanted "to also make sure that we show women as they truly are." Who thinks anyone going to look at art needs to be protected from nude women? Right now, families are running all around an enormous naked woman, her breasts and vulva prominently on display, in an old sugar factory in Brooklyn. That's art.

Perhaps the issue with McCall's work, then, wasn't its nudity, or even hair, but the near nudity. The work is certainly of a provocative nature – and Ruby May's partially clothed body seems to hold more erotic promise than a straightforward nude. It evokes the sprawling, semi-clad women of Egon Schiele and the frankness of Courbet's "The Origin of the World," a painting made intimate not just by the subject's spread legs but her hiked-up clothing. It has traces of Manet's "Olympia" in its DNA, a painting so scandalous when it was first unveiled it was criticized for "inconceivable vulgarity" -- perhaps because the model kept her jewelry and her slippers on. Ruby May also recalls, more recently, Richard Avedon's iconic photograph of Cat Power, brandishing a cigarette and revealing a peek of pubic hair from beneath her unbuttoned jeans. The photo, by the way, originally appeared, without apology, 10 years ago in the pages of the New Yorker.

A naked woman is a powerful thing – but naked women appear all over the art world. A woman undressing – a woman with a cool eye and low-slung pants – well, that's apparently unsettling. It's not just art galleries, either – note how Instagram has bikini girls galore but famously can't quite abide by a peek of hair creeping out of a bathing suit. It's a suggestion of something more potent than straightforward nudity. It's not shy or vulnerable. And though she may have been all too, too much for the Mall, Ms. Ruby May has already achieved exactly what art is supposed to do – she's made viewers think and talk, while admiring her undeniable beauty.