"Dawn of the Planet of the Apes": Can the ape-pocalypse save Hollywood's dreadful summer?

An overloaded simian sequel boasts terrific effects and the great Andy Serkis as its ape hero. But is that enough? 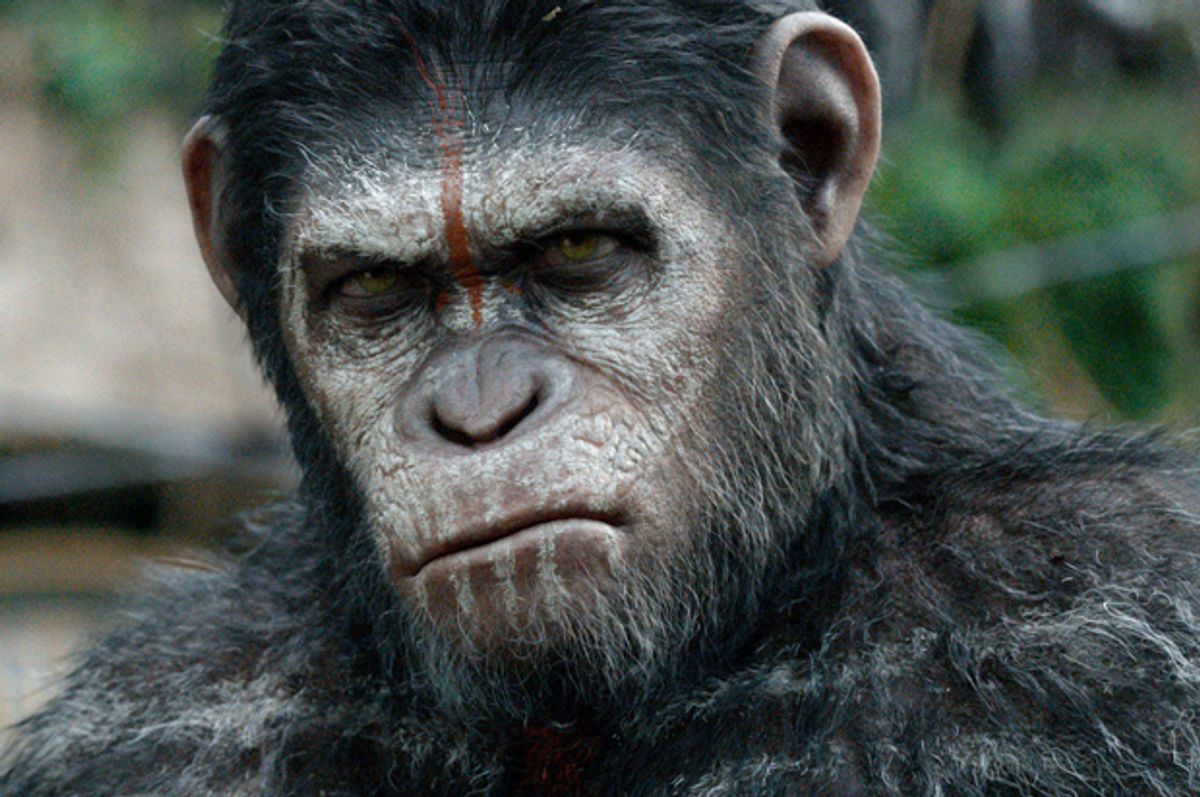 So here’s where Hollywood and its boosters have placed their bets on redeeming what already feels like a disastrous summer season for the studios: A handsome and atmospheric middle-chapter action movie that’s been pumped up to a level of pseudo-Wagnerian boringness and loaded down with way too much significance. Also too much yelling. Everybody is yelling all the time in this damn movie, and amid the impressive gloom of an abandoned San Francisco and the ape-infested Northern California redwoods, that gets old really fast. Gary Oldman, always an excellent actor, plays one of the principal human characters, and you get the sense they only had him on set for three days or something and told him to yell. So his lines, and for that matter most of the human characters’ lines, are delivered in capital letters, Internet-screed style: WTF DID YOU SEE THAT TALKING APES CAN U BELIEVE THAT SH*T LET’S BLOW THEM UP.

One of the things that has apparently happened, in the ape-pocalyptic future of director Matt Reeves’ prequel-reboot-sequel “Dawn of the Planet of the Apes,” is that while other simian species have gotten smarter, human beings have gotten a whole lot dumber. Maybe that accounts for the yelling, or the poor Homo-sapiens decision making that leads to a military confrontation between the Edenic ape-society in Muir Woods and the hunkered-down humans of San Francisco who have survived a deadly flu epidemic. Let’s hide our arms cache in a location that will be really easy for the apes to reach, if they get pissed at us! Let’s send a heavily armed anti-ape hothead, who seems to have been reared on transcripts of pre-apocalypse Sean Hannity broadcasts, to negotiate with them! As played by TV veteran Kirk Acevedo, this marked-for-obvious-death character is the one guy in the movie who yells more than Oldman. Everything out of his mouth is basically, “Not to be a racist asshole or anything, but …”

This is the paragraph where I play my role as a cog in the publicity machine and tell you that “Dawn of the Planet of the Apes,” which follows the unexpected 2011 summer hit “Rise of the Planet of the Apes” (and let’s face it, that’s confusing: Doesn’t dawn come before sunrise?), is a sort of pretty good choice as far as your summer entertainment dollar is concerned. You know, on the whole! Considering what they had to work with, and so on. Reeves, the creator of “Felicity” and the director of “Cloverfield” and “Let Me In,” takes over for “Rise” director Rupert Wyatt, and the level of CGI effects suggests a much larger budget, which is always a double-edged sword. While the human cast is entirely new and uniformly dull, Andy Serkis is undeniably terrific in the motion-capture role of Caesar, the super-chimp nurtured by James Franco in the first movie. While a genetically engineered superbug has winnowed down the human population to almost nothing, Caesar has been building a hippy-dippy ape commune in the woods of Marin County. (To anyone from the Bay Area this will be a weirdly irresistible idea, although the locations used are actually in British Columbia.)

Caesar’s troop live in wooden huts, are learning to read and write after a fashion, and as we saw in the first movie are developing the power of vocal speech. (This is believed to be physiologically impossible for chimpanzees, according to actual science, but never mind.) Their resemblance to idealized Native Americans, or to the blue people of “Avatar,” is rather too obvious to be overlooked. Screenwriters Rick Jaffa, Amanda Silver and Mark Bomback have cooked up (or overcooked) a parable of innocence and experience that gestures at a whole bunch of real-world issues, from the history of warfare and the rise of extremism to the conflict between tribalism and cosmopolitanism. Caesar’s ideological opponent in the war for simian hearts and minds is a brutal and duplicitous chimp called Koba (Toby Kebbell), who bears the scars of his abusive treatment in the labs of human science. Koba, as you history majors may know, was the youthful nickname and revolutionary nom de guerre of an especially notorious world leader, and I bet the writers were really proud of that one.

But beyond the litany of exhausting historical references – which go from Wahhabism and al-Qaida to the Battle of Agincourt to the fact that Koba starts a fire in Ape-Paradise, blames it on the humans, and tries to assassinate Caesar – “Dawn of the Planet of the Apes” is mostly a western. To be specific, it’s one of those westerns where the audience, which already knows which side will win between the cowboys and Indians, wistfully roots for the noble-savage underdogs, who live in harmony with nature, possess shamanic wisdom that can never quite be expressed and speak in a combination of subtitles and pidgin English. “Ape not kill ape” is the key commandment of Caesar’s society, which at first is said sincerely and later (of course) ironically. We’re one short metaphorical step away from “White man bring firewater, heap bad medicine” in this movie – and there actually is a scene in which a chimp swigs from a whiskey bottle and then shoots someone.

Caesar and human engineer Malcolm (Jason Clarke) gradually learn to trust each other and hope to forge a trans-simian peace treaty that will allow the San Francisco human colony to generate power using a dam deep in the ape-forest that might still work. (There’s a lot of feeble plotting herein, but that’s some of the worst.) Koba and Oldman’s batshit-crazy yeller, of course, prefer to launch World War Ape, and you get exactly one guess – no, wait, you don’t. Not even one. Reeves is a highly capable filmmaker when it comes to managing the lugubrious, rain-sodden mood and building tension toward the inevitable explosion of violence. The elaborate digital-effects action sequences are impressive, although nothing we haven’t seen before, and once your eyes get used to the artificial feeling of the motion-capture characters, Caesar and Koba and Maurice the orangutan wise-man and the rest of the apes start to feel like, well, people.

But the problem with “Dawn of the Rise of the Hitler of the Stalin of the Apes” is that Reeves and Serkis and a bunch of other entertainment professionals are stuck with an overly grandiose franchise that can’t quite carry the weight that’s been piled on it. (Is this prequel series universe-contiguous with the five great-dreadful movies of the 1968-73 Charlton Heston series? That's a matter of debate, although not interesting debate.) There were many moments where I admired this movie for its craftsmanship, but virtually none where I was swept away by its storytelling and couldn’t wait to find out what would happen. Here’s a rule that has gradually become clear to me: Any film that begins with one of those fake-news montages, where snippets of genuine CNN footage are stitched together to concoct a feeling of semi-urgency around its hackneyed apocalypse, already sucks even before it gets started. This one makes a dutiful attempt to struggle back from that suckage, but it all ends in yelling.