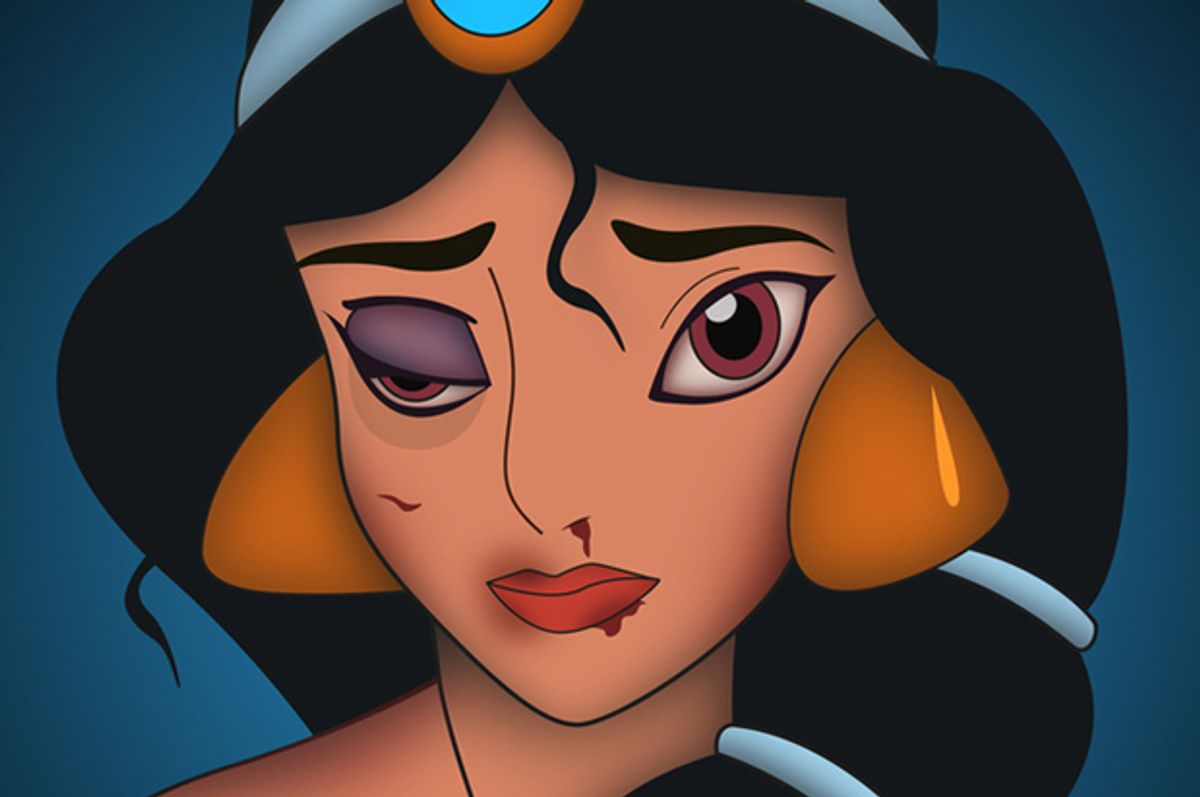 It's the Disney Princesses, as you've never seen them before! Shockingly reimagined! This time, they're domestic abuse victims, as part of an awareness campaign by artist Saint Hoax. They're Ariel, Jasmine, Cinderella and Aurora, in similar poses, looking sadly at the viewer and each sporting the same black eye, bloody nose, and bleeding lip. The caption is, "When did he stop treating you like a princess?" I have a new caption. "When can we back off the princesses and try something else?"

Saint Hoax has in the past appropriated Disney imagery for his politically tinged works, depicting Sarah Palin as Cruella DeVille and Barack Obama as Dr. Facilier and, earlier this year, in a series called the Princest Diaries, showing Disney princesses shocked by intimate kisses from their fathers. And he's not alone. Earlier this year, Italian artist Alexsandro Palombo created a series of disabled Disney princesses – including a Cinderella extending a prosthetic foot -- "to give visibility to a problem that affects a great amount of people in the world." And just like Saint Hoax, he's more recently turned to the subject of domestic violence , depicting, among other famed cartoon characters, a battered Snow White limp and lifeless at the feet of her abusive prince.

Those princesses, they're really great at symbolizing things, aren't they? Huffington Post says Saint Hoax's images "remind us domestic abuse can happen to anyone" and that "The disturbing posters are meant to be exactly that." But the "Disney princess as …" something that will BLOW YOUR MIND has long ago become a Clickhole-worthy, desperate to go viral cliché. Just this week – this week! -- we've seen stories about how the princesses have been recast as "Orange Is the New Black" characters, as "Avatar: The Last Airbender" characters and as armed warriors. And in the recent past, as different kinds of statements, they've been redrawn as Disney Princes and as superheroes and women of other ethnicities. Because, you know, the princesses are perfect and when you disrupt that – social commentary!

Contemporary art often relies on taking the safe and familiar and messing around with it – that's how you wind up Duchamp's Mona Lisa or Warhol's soup cans or Koons' balloon animals. So yes, we get what you're doing. And yes, it's admirable when artists try to take on issues like violence and the sexual exploitation of women to raise awareness and encourage people to speak out. But it's not enough to make unimaginative, repetitive work and get lots of attention for it and not be called out for how hackneyed it all is, just because it's "raising awareness." The trope of "Let's subvert the princesses" has been done. A lot. Real life is not a fairy tale. Got it. Perhaps we are growing up with unrealistic expectations of gender roles and perhaps the stories we show our children are not representative of the real world. Also got it. Art that confronts and asks questions always has value. Art that lazily relies on the same inspiration again and again, not so much. It's hard to do work that's thought-provoking and creative. But it's abundantly clear that it's really easy to give a princess a black eye.