"Then one of our glitter terrorists fired his gun": The World Cup's wild, naked anti-government protests 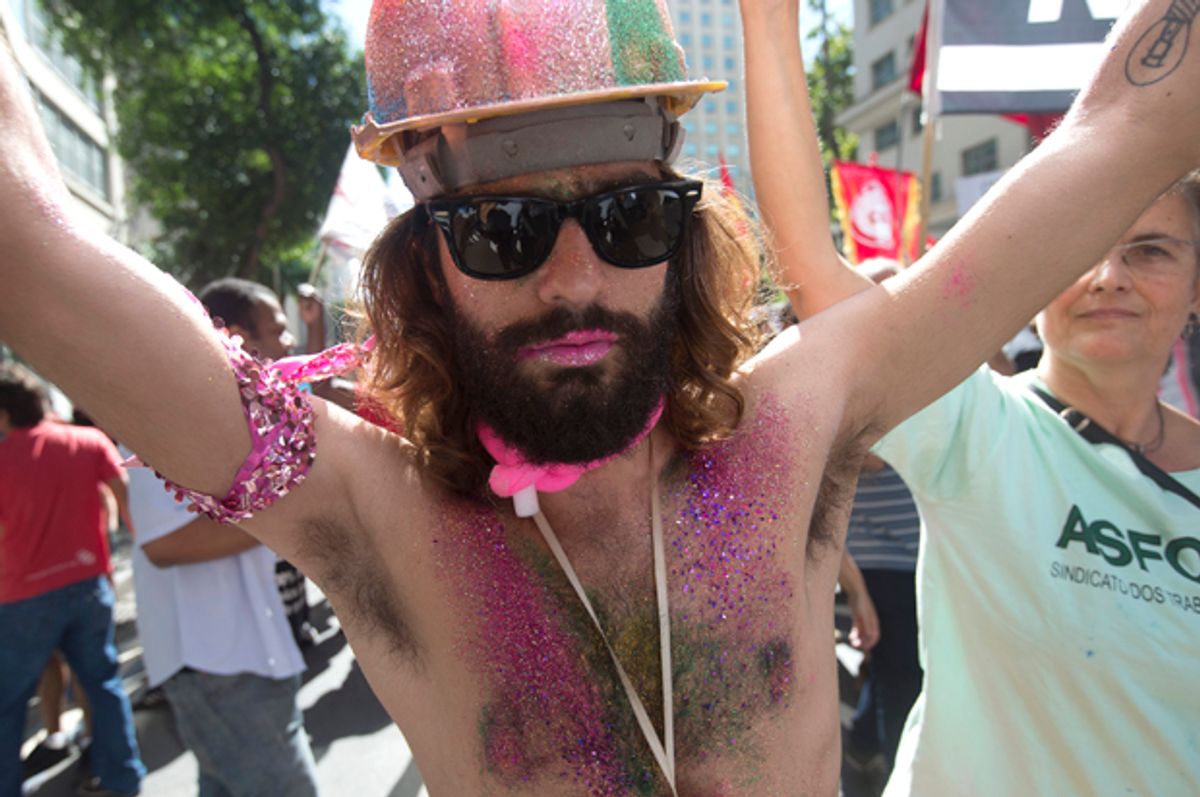 It’s true that the much-anticipated massive World Cup protests have not panned out -- perhaps because of increasingly brutal police tactics -- even despite Tuesday night’s national embarrassment. But that doesn’t mean there haven’t been public declarations against FIFA’s imperious behavior, white elephant stadiums, no-bid overpriced contracts to construction firms, and shady collusion between politicians and big business.

Though it has happened surprisingly under the media radar, Rio has seen all the trappings of protests: organized marches, sloganeering signs and chants, matching solidarity T-shirts and a heavy dose of tear gas and beatings at the end, courtesy of the country’s finest. But if that formula by now feels a little stale, a group of Cariocas (Rio natives) have injected the anti-establishment movement with new energy by leveraging the best of the city’s creative spirit to call attention to the abuses and absurdities of the controversial tournament and all the public-sector malfeasance it entails.

Under the banner of Carnavandalirização (a portmanteau of Carnival, vandalism and lyricism), this loose-knit coalition of artists, human rights promoters, designers, LGBT activists, musicians, actors and of course carnavalescos (the folks responsible for conceiving of the city’s annual samba school parade routines) is going for “quality over quantity,” as one participant said in a telephone interview, to pursue “creative dissidence” with provocative performances, searing critiques, clever plays on words and a willingness to put their bodies on the line.

Leticia (name changed at her request) has worked with a samba school for 12 years producing Carnival performances, and her knowledge of theatrical production and access to an arsenal of raw materials – fabric, paint, sequins and shiny accessories – have helped translate Carnavandalirização from a radical proposal to an even more colorful version of Brazilian life than the sanitized image that FIFA and the major networks broadcast.

With the grand finale coming to the group’s home turf on Sunday, they are preparing for their fourth edition of Our Cup Is in the Streets, which has brought together several hundred costumed protesters who have confused, bewildered and delighted police and the general public alike. While strains of the idea go back to last year’s Carnival, they really started to coalesce in May 2013, a month before the mass demonstrations that filled Brazilian streets. Now they riff on the truculent aspects of the traditional police vs. protester confrontation. The state sends in the tropa de choque (shock troops or riot police). Then, in come the choque de amor (shock troops of love) that walk right up to the cops and place flowers in the breast pockets of their bulletproof vests. “The police told us the choque de amor was very well executed,” Leticia said with pride.

And, flower power symbolism aside, it worked. Their first organized effort was in tandem with a Rio protest just hours before the World Cup opened in São Paulo on June 12. When it started to turn ugly, with police ready to haul protesters and nearby street dwellers alike off to jail, they called out the cops with flower lapels, who all of a sudden didn’t act so tough. “Then one of our glitter terrorists fired his gun, which launched glitter all over the place,” Leticia recounts. “That kind of defused the tension; that’s our role.”

Not that they’re pacifists. “Violence is part of protests too, but that’s not our function,” she said. Black blocs, the name applied to anyone who wears black or Anonymous masks and goes on the front line to fight with police, break windows or wreak havoc, have become a fixture of Brazilian protests. As a complement to, not a repudiation of, black blocs, Carnavandalirização trots out pink blocs – a group that also represents pro-LGBT forces – and silver blocs – which look like something out of a ’50s sci-fi B-movie set.

The elaborate costumes are produced in a collaborative atelier housed at the Casa Nuvem, a collective art space on a side street in Lapa, Rio’s bohemian redoubt. “We have Carnival in our DNA,” Leticia explains, stressing that they have no sponsors – an accusation leveled at many protest groups since last year’s spontaneous demonstration quickly took on a party politics character. So with leftovers in hand, they get to work, stitching, sewing, gluing and painting.

Some of their more elaborate creations are very direct allegories, with masqueraders representing the “FIFA gang,” as they call them, and the government, who were married in a mock ceremony at one of the protests. A staged shot that looks like a photo-booth printout on the Carnavandalirização Facebook page shows a creepy Ronald McDonald, representing the official sponsors of the World Cup, humping the government from behind.

That graphic metaphor carries through much of their rhetoric as a way of subverting homophobic language in Brazilian popular culture. At the World Cup opener, President Dilma Rousseff was booed and taunted with chants of “Ei, Dilma, vai tomar no cu (Hey, Dilma, go take it up the ass).” The sense that Brazil deu o cu (gave its ass up) to FIFA – or that the Brazilian people did the same to their corrupt politicians – permeated the popular protest movement of the last year.

Carnavandalirização has thus printed T-shirts that read over two lines “O CU PA / COPA,” a double entendre that parses varyingly as “Occupy Copa” or “Your Ass for Copa.” Leiticia explains, “For us, the cu is a marvelous, wonderful thing,” echoing a sign I saw when perusing protest coverage last year that read “Dar o cu é bom (Giving up your ass is a good thing).”

Shortly after Brazil’s humiliating defeat to Germany on Tuesday, they posted another image in the same photo-booth style as Ronald McDonald with the “O CU PA / COPA” slogan and a naked man showing his cu in all its glory. “Deu zebra,” the post read, a Brazilian term for a major soccer upset.

While half-naked women dancing samba atop floats at Carnival time may give a different impression, public nudity is not socially acceptable in Brazil – not even going topless at the beach. So naturally during the Brazil-Chile game on June 28 they organized a naked soccer game on the beach, a pelada pelada (as a noun, a pick-up soccer match; as an adjective, naked) when police were too engrossed in the official match to notice.

But their biggest successes remain strategic interventions that they pioneered last year before raising the Carnavandlirização banner. In July 2013, a group protested the wedding of an heiress to Rio’s lucrative, mafia-like public bus contracts. The hapless bride’s family name, Barata, means cockroach, so protesters wearing wedding dresses distributed plastic cockroaches outside the event. Next came Baratox, a fictitious exterminator that sent representatives to a public hearing at city council last August on the hunt for “cockroach politicians.”

The coup de grâce came on July 2, when the FIFA president, Olympic Committee head, and Minister of Sport, among other dignitaries, met at a forum in downtown Rio. June and July is festa junina season in Brazil, a kind of country fair where people dress up in peasant costumes and square dance – quadrilha (conveniently also the word for an organized crime gang). So they held a Quadrilha da FIFA, replete with an original song to serenade the powers that be and costumes with clever puns on official sponsors (Oi, a telephone company, became Foi – go away – and Visa became Vasa – mud).

“Five people is very efficient; it gets way more media attention than a protest now that those have become routine,” Leticia affirmed. Sure enough, the press made mention of them in its coverage of the event, even though a protest of five would not have generated even a sentence in the newspaper a year ago with tens of thousands taking to the streets.

That said, the World Cup final this Sunday is too big of an event to pass up for one last hurrah, though she was circumspect about future plans – whether, for example, Carnavandalirização will continue with the same approach through the 2016 Olympics in Rio, another source of public ire. “We serve the demands of the street as creative artists,” she said. Whether a new name or a new game, however, protesting, disrupting and mocking Carioca Carnival-style in acts of creative dissidence is sure to rear its glittery cu again soon in the cidade maravilhosa.