Religious right's huge risk: Why their new talking point may come back to haunt them 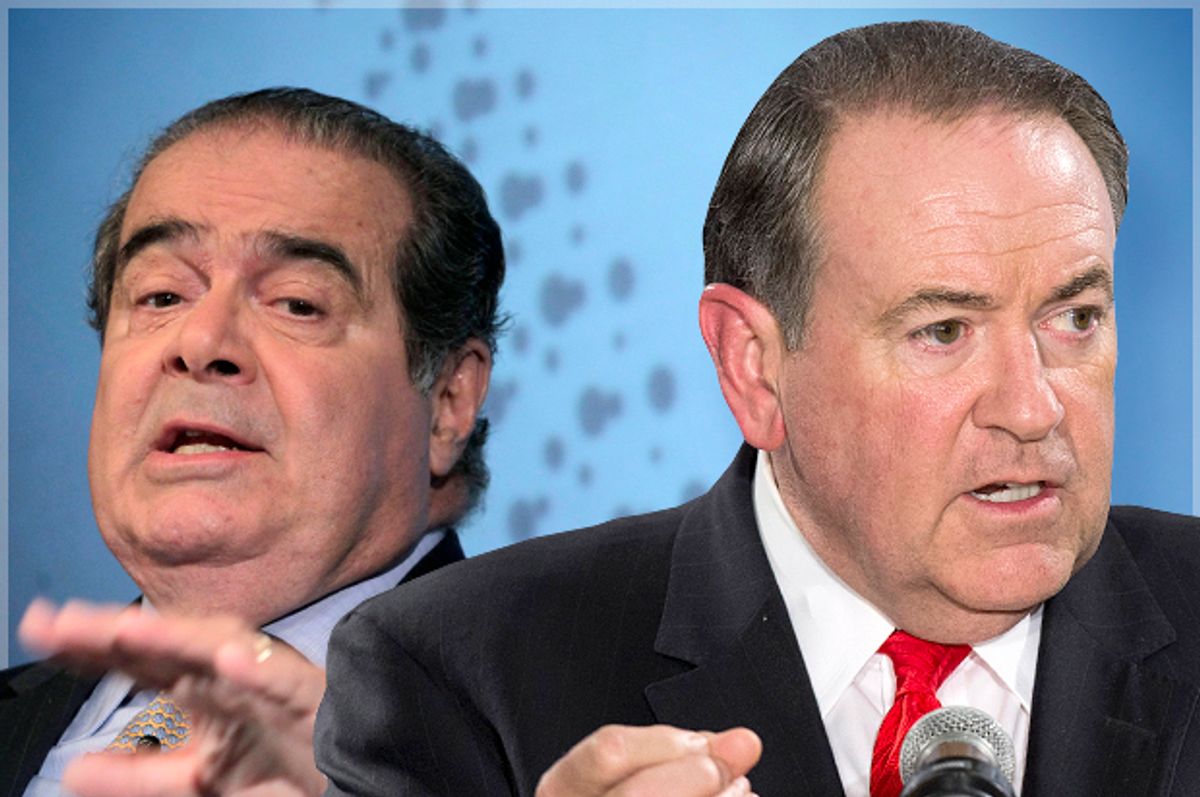 Before he was one of the few right-wing pundits liberals would read whenever they were worried about becoming too closed-minded, but after he wielded references to the Axis powers in order to scare the country into a war of choice that he promised would bring “an end to evil,” David Frum was purged from the conservative movement. His crime was writing a post for his now-defunct website, right after Obamacare became law, that blasted Congressional Republicans for simply opposing the bill rather than accepting it would pass and trying to push it to the right instead. “At the beginning of this process we made a strategic decision,” Frum wrote, “[to] make no deal with the administration. No negotiations, no compromise, nothing.”

“We were going for all the marbles,” Frum continued. But unlike 1994, when Bill Clinton’s attempt to reform America’s health insurance system imploded, taking many Congressional Democrats along with it, Republicans, wrote Frum, “ended with none.” By following “the most radical voices in the party and the movement,” Frum claimed, conservatives had been led “to abject and irreversible defeat.” Obamacare would not be repealed, he correctly predicted, and now one of the most important pieces of domestic policy in generations was a done deal — and one completed with much less influence from the GOP than could otherwise have been the case. Flipping Jim DeMint’s infamous prediction on its head, Frum claimed the passage of Obamacare was the Republican Party’s Waterloo.

A little more than four years have passed since Frum declared the new version of massive resistance to be a strategic disaster for conservatives, but while he’s moved on to bigger and better things, most of his fellow right-wingers still refuse to follow his advice. We see it in the Republican Party’s complete refusal to pass any kind of immigration reform. We see it in the conservative movement’s unwillingness to give up their impeachment dreams. And now, perhaps most consequentially of all, we see it in the religious right’s attempts to twist the Supreme Court’s recent Hobby Lobby ruling into a license to discriminate against women and LGBT people, just so long as they claim to do so for religious reasons.

Yet in all these instances — especially as concerns LGBT rights — any victories won through the strategy of massive resistance will, like the GOP’s opposition to Obamacare, simply be Pyrrhic preludes to a much more significant and long-lasting defeat.

Take the LGBT discrimination argument as an example. In this case, what you see on the right, in the wake of the Hobby Lobby decision, is a belief that the Court’s supposedly narrow ruling vis-à-vis birth control can be expanded to cover religiously based opposition to hiring LGBT workers next. Loath as they are to fully accept the evolving role of LGBT people in American culture, religious conservatives have tried, and are trying, to grandfather anti-gay bigotry into the new social contract by framing it as an expression of religious liberty rather than punitive control. That’s the logic, recall, behind the so-called anti-gay Jim Crow laws that popped up earlier this year in states like Kansas, Idaho, Mississippi and Arizona. Yet because such measures are wildly unpopular with the American people, as we saw most strikingly in the Arizona example, the religious right now sees that the only viable way to achieve their goals is through judicial fiat.

From the vantage of a total reactionary, it’s a logical move. Indeed, it’s probably the best chance religious conservatives have of creating little oases of intolerance in which to take shelter and avoid the progressively more open-minded outside world. But from the perspective of someone who perhaps isn’t entirely comfortable with the new normal when it comes to gay rights, but nevertheless believes a compromise on the issue must be struck between secular society and people of faith, this radically expanded view of religious liberty should be cause for grave concern. Anti-gay views will never disappear, but they are undoubtedly losing their purchase in the culture at large. To bind them at the hip alongside the concept of religious liberty — when even 44 percent of evangelicals under the age of 30 favor legalizing same-sex marriage — is to risk creating a generation of Americans who hear “religious liberty” as an anti-gay dog whistle in the same way previous generations associated “states’ rights” with hatred for blacks.

To get a sense of just how quickly things are changing — and just how desperate and risky the right’s religious liberty gambit is — look to this week’s announcement from the ACLU and other pro-LGBT rights groups that they were withdrawing their support for the Employee Non-Discrimination Act that was passed by the Senate last year and is still languishing in the House because of worries over its religious liberty exemptions. As the ACLU’s Ian Thompson told me, his organization’s decision regarding ENDA came partially in response to how conservatives have pushed the envelope on religious liberty and partially in response to how the general public, even in ruby-red states like Kansas, rejected those efforts with indignation and force. “It’s absolutely true that religious liberty is a very important value in this country and it affords us all the ability to hold any beliefs or lack thereof that we so choose,” Thompson said. “But it is not a license for us to impose our beliefs onto others or use them to harm others.” On this issue, Thompson argued, members of the religious right “have already overplayed their hand.”

Acknowledging that predictions about the future are especially difficult, it’s not too hard to make a reasonable guess as to where the politics of religious liberty are headed. As Thompson noted in our conversation, despite his signing on to the majority opinion in the Hobby Lobby case, Justice Anthony Kennedy was at pains to stress “that at least in his view, the decision did not have a very broad and sweeping reach.” While Kennedy didn’t say so explicitly, nearly all observers of the Court took that message to be a signal that the increasingly gay-friendly justice would not accept an interpretation of Hobby Lobby like the one now being pushed by social conservatives. If these same conservatives opt to take their view of religious liberty with regard to LGBT people to the Supreme Court — as it’s currently comprised, that is — they may end up doing little more than forcing Kennedy to make his position explicit. And considering the fact that most Americans mistakenly believe something like ENDA is already federal law, it’s unlikely that, in that scenario, conservatives would find the public at large to be particularly sympathetic.

To a significant degree, there are no good options for social conservatives who want to ensure firing someone because they’re gay remains within the law. As was the case for Congressional Republicans during the first two years of Obama’s presidency, social conservatives no longer have a realistic hope of outright stopping the changes they fear; their best-case scenario is to be part of a conciliatory negotiation process in which supporters of LGBT rights may, in the interest of magnanimity and cooperation, settle for overwhelming rather than total victory. But like the Congressional Republicans who chose to fight Obamacare to the death rather than engage in the process and pull it more in their direction, social conservatives pushing the boundaries of religious liberty are setting themselves up instead to gain nothing and look intransigent and hopelessly backwards in the process.

That’s their right, of course. But if they find themselves, 10 years from now, living in a country that thinks of religious liberty in the context of LGBT rights as little more than the smokescreen of bigots, they won’t be able to say David Frum, among many others, didn’t warn them.