"Sigh" -- as in "Can't tonight. SIGH" -- has become our most passive-aggressive buzzword 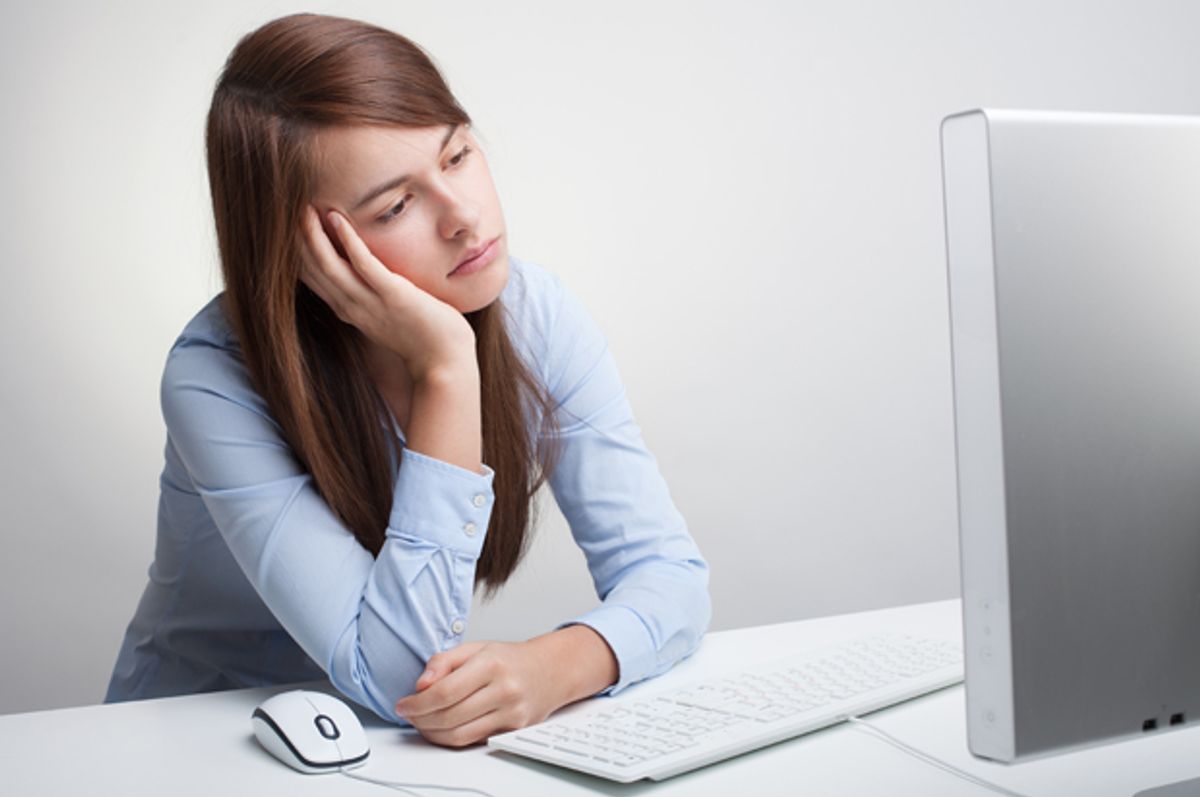 If there's anything that more than two decades of online culture has perfected, it's the art of passive-aggressive communication. Unlike all other prior generations who occasionally spoke to each other, ours now relies on near constant written exchanges for our social interactions, from general declarations to the world of what we're eating for lunch to private, "WHUT R U WEARIN?" requests. You'd think that after all this time of learning to navigate our colloquy without face-to-face and verbal cues, we'd be better at it by now. We'd have figured out more clever, subtle ways of conveying intent that don't rely on, say, a crude image of an upraised thumb, or handy phrases that seem loaded with multiple interpretations. But we haven't. Behold, for example, the most pernicious four-letter word in modern social intercourse: Sigh.

The word "sigh," when sprinkled into a poem or a song, has a lovely, almost assonant quality. When William Shakespeare tells ladies to "sigh no more," or Robert Frost knows he'll be "telling this with a sigh," that is great stuff. You see "sigh," however, as the first word of a reply to your email about whether your client is going to make those changes you requested, you know you're going to have to strap in for the world's most convoluted "No." As in, "Wish I could. ::sigh::." As in, "Soooo buried in deadlines. ::sigh:: Good luck!" A colleague says, "It has become an all-purpose weasel word meaning 'I wish I could but can't,' or 'I am just so busy.'" It's a sorry-not-sorry. When it's the reply to that text to your friend about "How'd the date go?" it's a backhanded request for sympathy. "There are no good men left," she'll reply, without giving details. "Sigh." And as a cryptic, "Aren't you dying to coax today's sad tale out of me?" one-word status update, I say that "Sigh ..." is  grounds for immediate unfriending/unfollowing on Twitter. I'm sorry, are we on a veranda here? Does someone need a fan? In the future all Internet communication will consist, in this order, of trigger warnings, sighs and gifs of someone slow-clapping.

Online communication has always been imperfect. There are as many ways to set another person's teeth on edge as there are quizzes on BuzzFeed. What, after all, is the smiley but a neat way of saying crappy things to people and then self-exonerating? C'mon, you're not allowed to be hurt or angry; I put a happy face at the end there! What is the randomly applied "LOL" but the typed equivalent of laughing at one's jokes? Who has ever declared "IMHO" before expressing a thoroughly unhumble opinion? Has any string of characters been yet devised to better incite pure rage than the shrug emoticon? My friend Elizabeth recently noted, "I need someone to write a script that replaces all of the shrugs with cat pictures -- that I can then have converted into flaming portals to hell." Another pal calls for a moratorium of the stand-alone use of "um" and "wow" – to which I say: THIS. And is there a single key more promiscuously misused than the hashtag? #No. #Nope. #NotEven.

Yet in the pantheon of smiling poop emojis and ironically applied MIRITE?s, "sigh" has earned itself a special place of dubious honor, if for its sheer Eeyore-like moodiness alone. At least "hella" never made the person reading it feel like she's on the receiving end of a gloom offensive. It's a four-letter sad trombone, as insincere in its dourness as a string of exclamation points is in its enthusiasm. But you've got to give it credit – of all overused buzzwords, it's the closest to its real world equivalent -- that heaving, joy-sucking, feel-sorry-for-me sound. There are a lot of ways to say, "Not going to happen," or "It didn't go well." But if you're going to sigh, stick to poetry.