An ex-vegan takes on the trolls 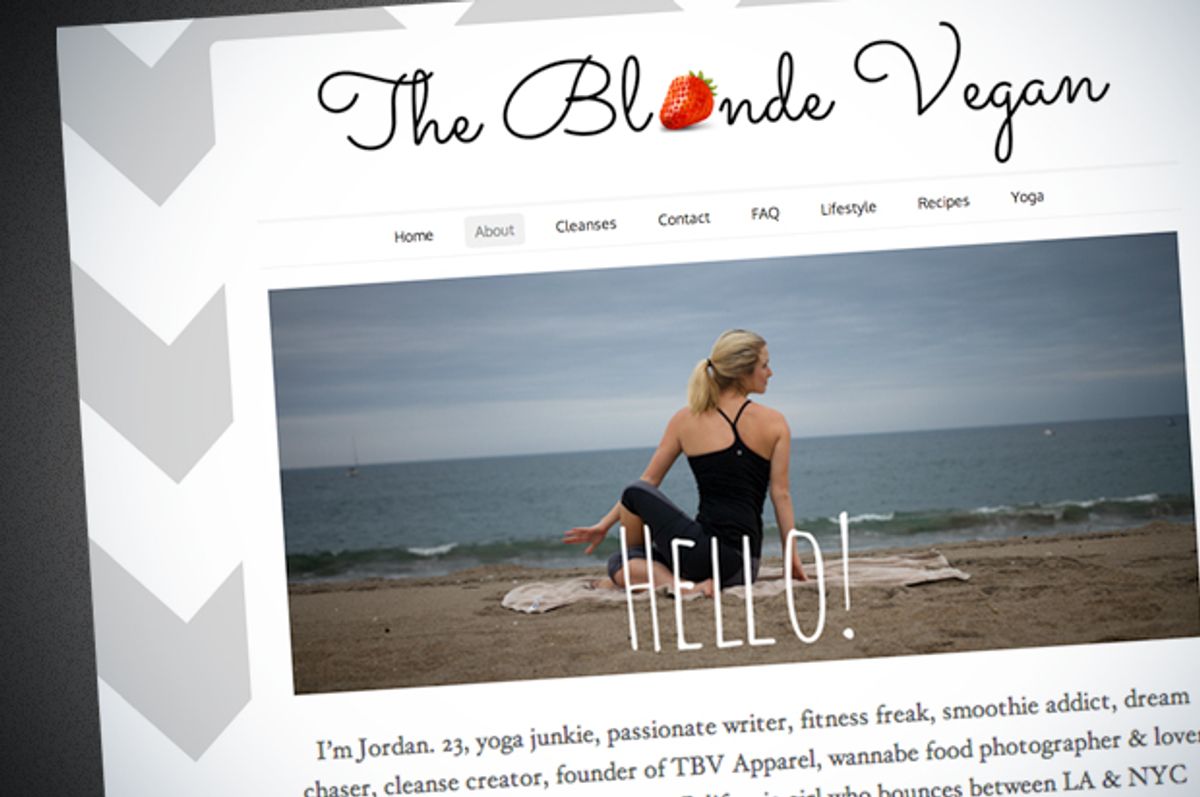 Giving up veganism can have serious consequences. There are all the threats and trolling to consider, for instance.

Jordan Younger runs a popular lifestyle blog called the Blonde Vegan. The 23-year-old describes herself as a "yoga junkie, passionate writer, fitness freak, smoothie addict, dream chaser, cleanse creator, founder of TBV Apparel, wannabe food photographer & lover of all things health related." But late last month, in a candid post for her site, she explained one thing she wasn't anymore, and how she was "transitioning away from veganism." As she put it, "My body started telling me things" that suggested a strict vegan diet was no longer working for her. Meanwhile, however, her mind was putting her in a place where "I also started fearing a LOT of things when it came to food…. I started living in a bubble of restriction. Entirely vegan, entirely plant-based, entirely gluten-free, oil-free, refined sugar-free, flour-free, dressing/sauce-free, etc. and lived my life based off of when I could and could not eat and what I could and could not combine." Eventually, after several physical and emotional wake-up calls, she realized she was dealing with an eating disorder – orthorexia – the unhealthy obsession with ironically, eating healthy. Younger is now changing the focus of her site to include her own new embrace of incorporating animal-based items into her diet, while keeping the focus on nutrition and healthy eating. And she clearly states that "I am NOT blaming veganism for the disordered eating habits that I developed. There are countless fabulous ways to maintain a balanced vegan diet and live a healthy lifestyle. Those who read this blog know that I have a very extreme personality, and the combination of my personality with the restriction of an entirely plant-based diet pushed me over the edge."

The response to her decision to, as she puts it, "take my health in my own hands" has been largely positive -- but this being the Internet, there has been some straight up hatred and anger as well. She says that since changing her diet, she's had commenters tell her "You were never vegan" and "No wonder you're so ugly!" -- and scarier things. "There’s no reasoning with people who make no sense," she writes, "and even though it’s kind of fun to laugh at the wild things they say (such as: “I’m going to barbecue your family” … excuse me?) it’s also very worth it to ignore their ridiculousness entirely." Earlier this month, Younger told Well+Good that she changed her Instagram handle to the Blonde Veggie at 3 a.m. because "She’d just received anonymous threats saying that someone would kill her if she refused to change her current blog name, The Blonde Vegan." And members of her own community turned against her. She says, "Certain leaders in the raw vegan community turned their back on me so violently. People I know personally, who I have collaborated with. One blogger began lashing out and leading an army, commenting hateful things in the middle of the night. Some vegans have this cult-like mentality—it turned me off of the lifestyle."

The backlash is similar to what happened to author Alexandra Jamieson, who gained famed as Morgan Spurlock's vegan girlfriend in "Supersize Me," when she announced last year she too was no longer fully vegan, admitting she'd been "sneaking around" to eat animal products and that "After working for 12 years as a health and wellness professional, I’d developed an eating disorder." She acknowledged, "Some cravings are just your body telling you what it needs," leading one of her commenters to shoot back, "Meth addicts crave meth but certainly they shouldn't 'listen to their bodies.'"

Living a life that's healthy first and foremost means cultivating compassion, for humans, for animals and for one's self. It's entirely possible to live a responsible, healthy, pleasurable lifestyle without eating animal products. And all of us can and should move toward a more plant-based diet, for the good of ourselves and the planet. But if one's diet is causing health problems or disordered thinking, it's unsustainable. That has to be respected. To be hostile toward an individual for changing her diet is ignorant, and as Younger says, "If you’re going to call me unethical for experimenting with free-range eggs and wild fish, I am going to call you unethical for being cruel and judgmental toward another living being who is trying to do what works for her body."

Creating the Blonde Vegan was a means for Jordan Younger to share her insights into health and nutrition with a growing audience. And she's still doing that – in fact, to a greater degree now, because she's acknowledging her own needs for flexibility, in a way that can serve as inspiration for others facing their own struggles as well. Health isn't just about what you eat or don't eat. It's about how you think and act. Younger now says, "I'm getting over this eating disorder hurdle one step at a time. And that feels amazingly good."