Adding convenient, low-cost banking services to post offices looked to be dead. Here's why the picture has changed 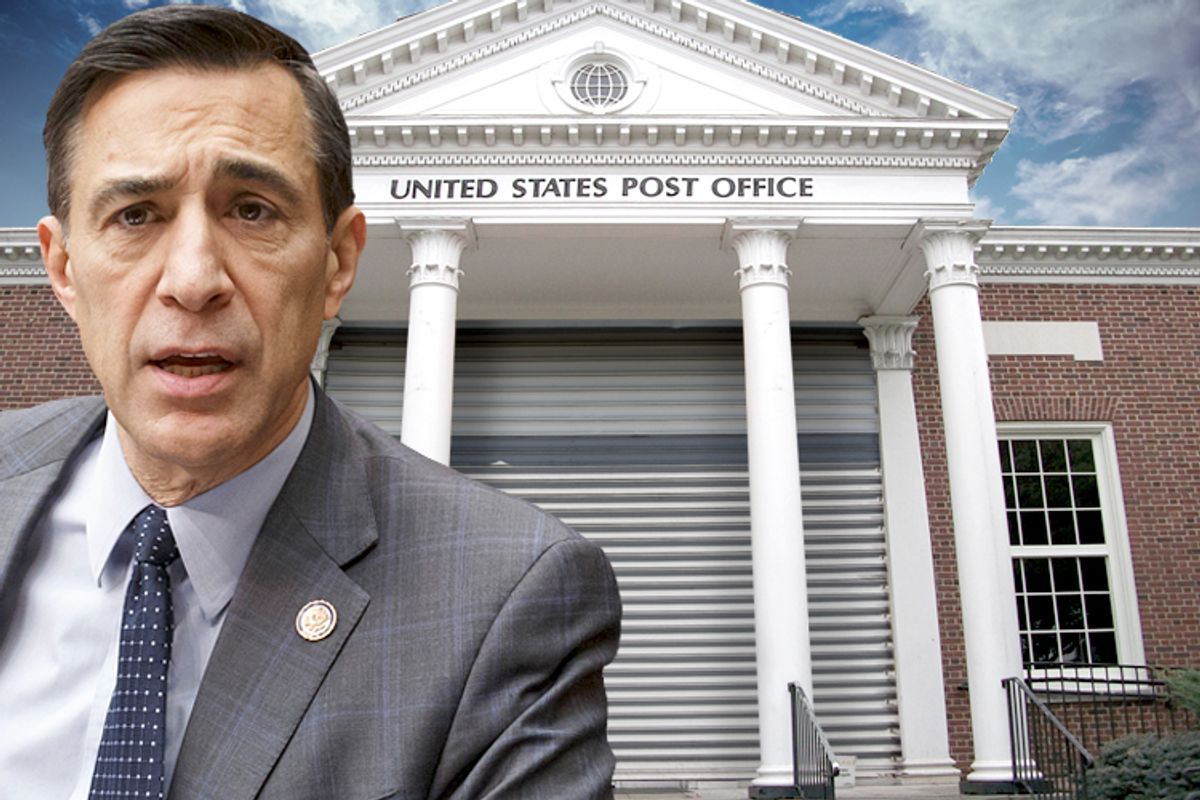 Though the promising concept of postal banking has frustratingly stalled due to inertia from policymakers, this week things started to move. Rep. Darrell Issa, chairman of the House Oversight Committee, which oversees the Postal Service, previously called postal banking “unacceptable” and a “massive expansion” of government power. But now, the Senate Homeland Security and Government Affairs Committee, after months of inaction, finally held hearings for four nominees to the Postal Service Board of Governors, which operates as a board of directors for the agency, hiring the postmaster general and setting agency policy.

For most of the Obama administration through to today, Republicans held a majority on this board thanks to multiple vacancies. But confirming these nominees would equalize the representation at four Democrats and four Republicans (the president still needs to nominate a replacement for an additional vacant seat, which would give Democrats the majority). This would put the pieces in place that could make postal banking a reality.

The hearings were a sleepy affair – only committee chairman Tom Carper, D-Del., bothered to show up (Tom Coburn, the ranking Republican, couldn’t make it due to a delayed flight). And the questions were less than probing. But Democratic nominee Vicki Kennedy – Ted’s widow – did say in her prepared remarks that “I think it also important to look at the possibility of expanding into related business lines,” and that the post office needed the “regulatory flexibility to take advantage of opportunity and innovate when it is in the public interest.” Postal banking serves that capacity perfectly – the one in four American households with little or no access to financial services need a convenient, cheap banking option, so they don’t continue to get gouged by alternatives like payday lenders and check-cashing stores.

Another Democratic nominee, Stephen Crawford, cited the inspector general report on postal banking directly during questioning. “We see a lot of foreign postal services make some money on that,” Crawford correctly pointed out. “Whether it makes sense for the Postal Service to get into that is a huge question, the issue, though, is to have the opportunity to experiment … If I were on the board, that’s an area I would give special attention to.” While not a ringing endorsement, Crawford did acknowledge the importance of a pilot program, the first potential board member to explicitly do so.

Even more momentum comes today from a full-day conference in Washington on postal banking, organized by the Pew Charitable Trusts (you can access a live stream of the event here). Speakers include Sen. Elizabeth Warren, Issa and Postal Service Inspector General David Williams. At the conference, Pew delivered the results of two studies on postal banking: one surveying public attitudes about the concept, and another looking at the geographic distribution of banks and post offices, to assess whether postal banking would offer additional convenience. Salon got a sneak peek, and both studies carry positive news for supporters, albeit with some caveats.

In general, feelings toward the post office are high – upward of 75 percent of those surveyed responded positively, higher than feelings toward banks and much higher than toward alternative financial services. On postal banking itself, the concept has low salience, a function of its relative obscurity. Those who have an opinion support it, however, including a majority of Republicans.

Pew made sure to survey a large sample of the unbanked, those who use alternative financial services like check-cashing stores and payday lenders regularly. And in general, this community was very predisposed to the idea. The unbanked favored the post office making available prepaid debit cards by 38-9 percent. They agreed with the general arguments in favor of postal banking by a count of 64-29 percent. And a large majority said they would be likely to use lower-cost versions of these services: 81 percent would go to the post office to cash checks, 79 percent to pay bills and 71 percent as an alternative to payday loans. With more than one in four households in the unbanked or underbanked category, that’s a significant market. “There’s a lot of interest if they can use postal services at a lower price point,” said Alex Horowitz, a researcher at the Pew Charitable Trusts.

Cost is not the only factor, however. Survey respondents listed a number of conditions important to them in choosing financial services, including customer service and, in particular, convenience. That’s where Pew’s interesting work on geographic distribution comes into play.

Obviously the post office wasn’t built with access to financial services for citizens in mind. But by virtue of its universal service mandate, it has a network of 35,000 locations in every corner of the country. And where banks have not made the effort, the post office has significantly more reach, particularly in rural America.

The Pew study finds that 3.5 million Americans live more than 10 miles from the nearest bank branch, and another 3 million live in densely populated areas that are nonetheless still over a mile from the nearest bank. Pew provided maps plotting post offices against bank branches, and in many regions, in particular rural communities like central Mississippi, west Texas and Montana, post offices simply have more reach. “There’s definitely an urban-rural difference,” said Clint Key, lead researcher on the geographic study for Pew. “Post office coverage is relatively denser in rural areas than urban ones.”

Even in some urban locations, particularly in high-poverty areas, the closest postal branch location offers more convenience than the bank. And with bank closings more pronounced in low-income areas, the value of post offices as a financial services alternative could grow over time.

Check-cashing stores and payday lenders, of course, are ubiquitous in poor communities (there are more than twice as many payday loan storefronts as Starbucks locations). But a combination of low cost and convenience could give postal banking a leg up. While cost structures, worker training and other factors would have to get analyzed to assess whether a broad move into postal banking makes sense, the raw materials for a successful business venture exist. “Is there a market for low-cost financial services? Certainly,” Pew’s Alex Horowitz told Salon.

At the very least, the findings argue for running an experiment. That’s where public pressure comes in. Getting the nominees for the USPS Board of Governors, at least one of whom sees value in a pilot program, confirmed to the board would be a good start. Then the public would have a target to engage.

Public outcry, largely from postal unions and their allies, has led to the Postal Service ending its pilot program of post office counters inside Staples, staffed by non-union workers at lower pay. The announcement came days after the American Federation of Teachers, a profession that uses lots of office supplies, voted to boycott Staples in solidarity with postal workers. Staples will still offer some postal agency products as part of the “Approved Shipper” program, and unions remain dissatisfied with the arrangement, vowing to keep up the pressure. But it does show that advocacy can make an impact on the Postal Service leadership.

Believers in postal banking have some high-profile support and some key facts. Now they need to organize and act. If the United Kingdom’s post office can launch a mobile phone network, there’s no reason the United States cannot respond to technological changes in mail volume by returning to offering financial services, which aligns with its core mission of promoting commerce. It certainly beats closing more distribution centers, firing more workers and squandering a vast network of physical and human capital that can serve some of the nation’s critical needs.

Note: If you’re attending the Netroots Nation conference in Detroit this week and want to learn more about postal banking, I’m moderating a panel on the topic this Friday at 11:00 a.m. ET. More details are available at this link.