"We shouldn't really be doing this" 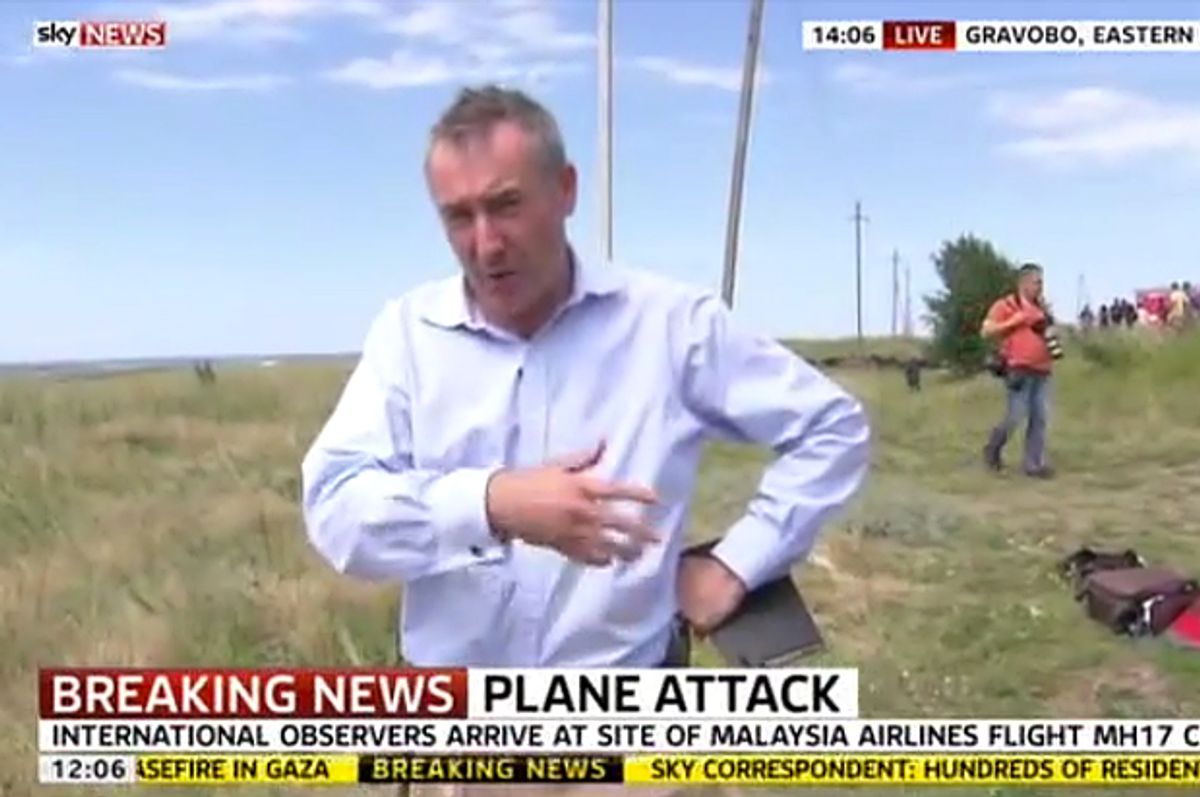 "We shouldn't really be doing this, I suppose," the reporter said. And he was right. In the mad, often ruthless scramble to report breaking news, reporters – and the networks they work for -- can let their pursuit of an angle the other guys don't have get in the way of things like basic journalistic ethics and humanity. Take, for instance, Sky News correspondent Colin Brazier's live report from the site of the MH17 crash on Sunday – a report that included brazenly rummaging through the wreckage.

In his report, Brazier picked through the luggage of a victim, pointing out "a set of keys, toothbrush…" His action immediately disturbed many viewers, including media professor Joe Watson, who called it "A horrible moment for journalism," and BBC radio presenter Shelagh Fogarty, who begged, "Sky!!! Get your reporter to STOP rummaging thru belongings at #mH17 crash site." The brother of British victim Richard Mayne has called the report "sick and the worst example of news journalism." And the Daily Mail called it "shameful," although the Daily Mail calling anybody else's behavior "shameful" is Charlie Sheen calling someone else "drunk."

Sky News has since issued an apology for Brazier's behavior -- though the mea culpa is remarkably restrained. Responding to what the network says amounted to "a handful" of complaints, the network explained Sunday, "Today whilst presenting from the site of the MH17 air crash Colin Brazier reflected on the human tragedy of the event and showed audiences the content of one of the victims' bags. Colin immediately recognized that this was inappropriate and said so on air. Both Colin and Sky News apologize profusely for any offense caused." Well there you go. He was "reflecting" on the "human tragedy," and he even said he supposed he shouldn't be doing this, so let's make a big deal of it. We all know that when you say "I shouldn't" and then you do anyway, it doesn't really count, right?

Brazier's eagerness to jump into the personal effects of a victim recalls the worst of tabloid behavior -- and for many in the UK, it no doubt calls to mind the ethical failures of the Murdoch empire, including hacking into the voicemails of a murder victim. And Brazier's act was a tasteless grab to fill airtime, no question. Yet the impulse to connect in a human way with a tragedy that can feel at times too large, too abstract to comprehend, is perhaps understandable. And the MH17 crash scene is particularly unique because of the harrowing political tension around it. In a Sunday report, Brazier also said, "I've been walking around, coming across body parts all the time, many of them charred beyond recognition. Men, women and children, indeterminate frankly, you can't tell. Very often you are looking at charred spines, that's all that's left…. It is a truly macabre, horrific situation." Bodies have reportedly been removed "but remain stuck in refrigerated railroad cars in pro-Russian, rebel-held territory," while the site itself has remained open enough to allow for the kind of open rummaging that Brazier engaged in.

Right now at the California Science Center, you can visit a recreated disaster scene and not only examine the jewelry and other detritus of the victims, but see "full body casts of twisted human forms, asphyxiated by extreme heat and noxious gases and forever frozen in time." Of course, in the case of Pompeii: The Exhibition, the tragedy took place a long time ago, and there aren't any grieving family members around to take issue. But you can also browse online through the not-so-distant past in the clothing and the dolls and the books of Holocaust victims. And in New York City, you can go downtown and pore over personal effects like letters and eyeglasses and work IDs of people whose loved ones are still alive, at a place the Washington Post describes as "an oversized pit of self-pity and voyeurism" – the 9/11 Memorial Museum.

The fact that "too soon" is now considered a valid response to any terrible event says that tragedy demands a certain amount of distance – and that distance is never easy to gauge. Brazier's impulse was wrong, and he clearly sensed that even at the time. He was not behaving in a way that honored the victims but as one rummaging for a visual to a television story. But before condemning him entirely, it's worth remembering that there is always a human story in the artifacts. Brazier failed to find it, but in time there may yet be somewhere a memorial to what happened to that plane on Thursday -- a memorial that includes a set of keys and a toothbrush.