In the age of "empowertising," it's worth asking whether feminism should be treated as a brand at all 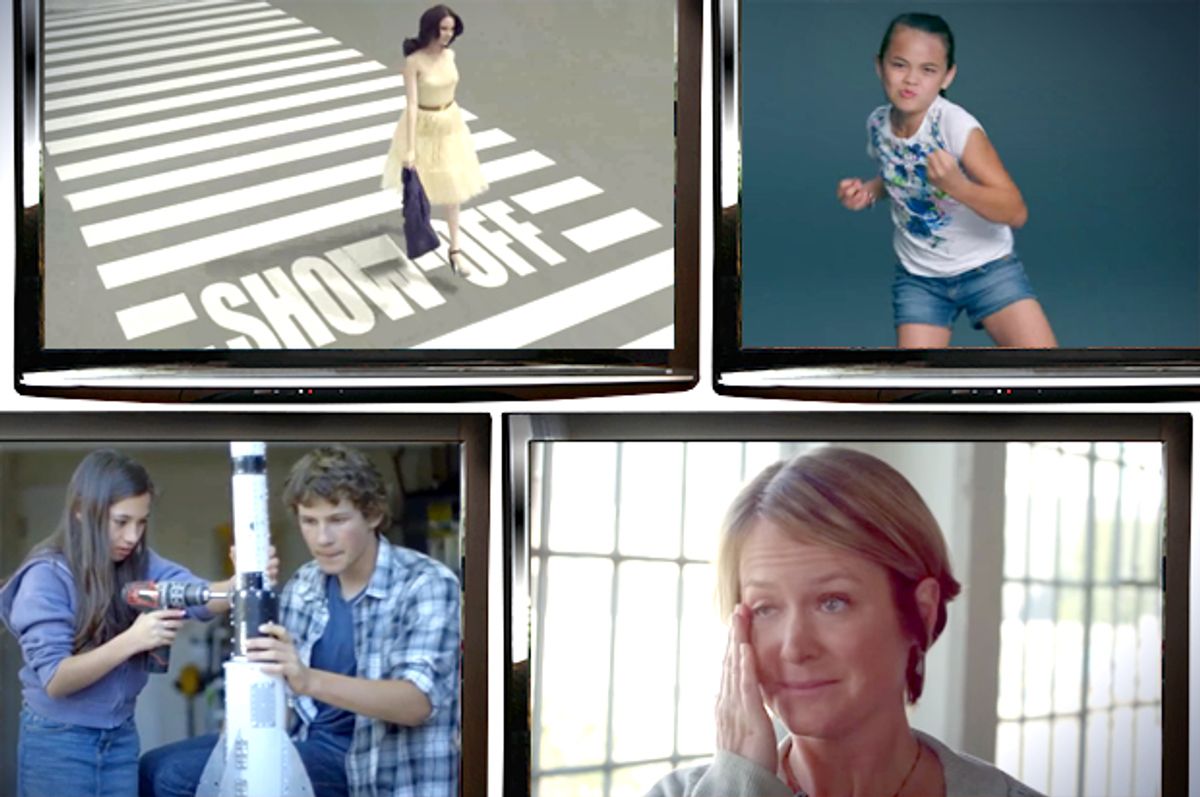 Over the past few months, a series of ads have been making the rounds on the corner of the Internet where I tend to hang out — let’s call it the Upworthy-friendly corner. One, from Verizon, is called “Inspire Her Mind,” and shows a girl in various stages of child- and teenhood, at every point discouraged by an offscreen voice. She’s stomping through a creek (“Don’t get your dress dirty!”), examining marine life in tidepools (“You don’t want to mess with that”), building a rocket in the garage (“Why don’t you hand that [drill] to your brother”). The final scene finds her stopping in front of a science-fair poster in a school hallway, pausing, and then dejectedly using a window reflection for that most stereotypically girly act: applying lipgloss. The voiceover: “Our words can have a big impact. Isn’t it time we told her she’s pretty brilliant, too?” appears, as statistics about girls majoring in STEM fields bloom on the screen.

The second, for Always menstrual products, finds noted filmmaker Lauren Greenfield (whose past work includes the photo exhibit and book “Girl Culture”) asking adults to pantomime running, fighting and throwing “like a girl.” Exaggerated simpering and rubber-wristed movements follow. Greenfield then asks little girls to do the same activities, and they follow directions with a fierceness untainted by stereotype. Afterward, Greenfield follows up with the kids — who are genuinely confused by the idea that doing things “like a girl” is meant to be an insult — and the adults, who are well aware of how insulting it is. The text in the ad then notes that girls’ self-confidence drops dramatically at puberty, and urges viewers to redefine what “like a girl” means.

Feminine-hygiene products have always used feints at better self-confidence — strong enough for a man, made for a woman; gives you wings, etc. — but there’s something new happening with its collaboration with Greenfield. Verizon, meanwhile, intentionally partnered with both Makers, the digital initiative aimed at showcasing the stories of women all over the world, and Girls Who Code (whose founder, Reshma Saujani, voices the spot) to create the “Inspire Her Mind” ad. In the past year, ads for Dove, Pantene, and GoldieBlox have made similar overtures to the progressive consciousness, with widely shared, overwhelmingly lauded videos crafted for maximum virality.

But what such ads are actually selling is not necessarily clear. Always’s “Like a Girl” spot, for instance, isn’t pegged to any product in the brand’s line, but seems simply to have been created to go viral. (Which it quickly did, with more than 10 million YouTube views in the first four days of its release.) Likewise, Verizon isn’t focusing the “Inspire Her Mind” pitch to a new coverage plan; it’s simply saying, “Hey, we’re the carrier who cares about your (or your daughter’s) potential, so choose us.” So what’s really for sale here?

Starting at the dawn of the women’s liberation movement of the 1960s and ’70s, the ad industry was there to translate the tenets of feminism into cold, hard cash. Maidenform was one of the first brands to speak to women in the language of liberation, with its “Dream” campaign; Virginia Slims cigarettes, the bestselling Charlie and Enjoli perfumes (the former for “the new woman,” the latter’s jingle about bringing home the bacon and frying it up in a pan becoming a triumph of advertising earworms), and Secret antiperspirant would follow with indelible campaigns whose aim was to sell old standards with a new vocabulary.

The 1990s brought the growth of TV networks (and the establishment of women’s-interest cable channels like Oxygen, Lifetime and WE) and, subsequently, the ramping-up of “narrowcasting” as an industry strategy. And it also brought a new interest in feminism, sparked first by the Riot Grrrl phenomenon and, later, by the watered-down “girl power” of the Spice Girls. It was the perfect climate in which a specific kind of advertising could flourish: Lady Foot Locker set a montage of women running to a sludge-metal rendition of Helen Reddy’s libber classic “I Am Woman, Hear Me Roar,” while Mountain Dew carved out a narrow slice of its weekend-warrior demographic for women with an extreme-sports montage backed by Lesley Rankine’s sneering remake of Maurice Chevalier’s “Thank Heaven for Little Girls.” Most famously, Nike got in on the girl-power action with the 1995 ad series titled “If You Let Me Play,” which drew connections between childhood athletics and positive outcomes in adolescence and adulthood. In them, a passel of adorable multiracial girls spoke plaintively to the camera. “If you let me play…. I will have more self-confidence…. I will suffer less depression…. I will be more likely to leave a man who beats me…. I will be less likely to be pregnant before I want to.”

Ads in the 2000s became downright shameless in co-opting the ideas behind feminist buzzwords like “empowerment” and “choice” for a range of female-associated products. Lean Cuisine, for instance, advertised its diet frozen pizza with a campaign that listed diet frozen pizza on a women’s-rights continuum that included “the right to vote” and “the push-up bra.” Push-up bras themselves were shilled by Barely There lingerie in an ad that posited that if Betsy Ross had been invited to sign the Declaration of Independence, she would definitely have wanted to do so in well-fitting undergarments. And diamond giant De Beers created a whole new market  aimed at serving women so independent, solvent, and sassy that they weren’t interested in waiting on a man to squander two months’ salary on an engagement bauble. Ads for the “right-hand ring” portrayed married women as boring do-nothings and single women as fearless adventurers with copy like “Your left hand rocks the cradle. Your right hand rules the world.” As long as you could afford the rock, the campaign promised to turn the state of singlehood into a statement of independence and badassery.

And since 2002, when Dove’s Campaign for Real Beauty began offering up a multiplatform campaign combining striking visuals (from photographers like Annie Leibovitz and Peggy Sirota), institutional heft (a study written by Harvard academics, partnerships with the Girl Scouts of America and Girls, Inc.), and the sharing potential of social media, what has been called “fempowerment” advertising — or, as I like to call it, “empowertising” — has become a category unto itself. But the new ads for Verizon, Always, and co. aren’t, like their predecessors, simply co-opting feminist ideals to fold into existing advertising pitches. The pitch is suddenly about feminism itself — about changing the way consumers think about men and women, boys and girls, stereotypes and perspectives. GoldieBlox’s spunky would-be engineers, Pantene’s lustrous-haired label shunners, and Always’s bemused kids all challenge us to imagine how changing our thinking could change the world. And while thinking differently has always been a goal of advertisements, here that goal seems to be to do so in life, rather than just in consumption.

But it’s reasonable to give a healthy bit of side-eye to these new ads, coming as they do after decades of frozen-pizza pandering and push-up bra “empowerment.” The contradictions at the heart of ads like Dove’s and Pantene’s sloganeering have certainly not gone unnoticed, with both feminist critics and ad-world chroniclers noting that, for instance, it’s difficult to take Dove’s championing of “real beauty” seriously when one considers that parent company Unilever is one of the largest purveyors of skin-whitening cosmetics in South Asia. And I wasn’t the only one to cringe at Dove’s recent attempt to “make armpits into underarms” with its Advanced Care deodorant; the obvious creation of a problem that the brand had just the product to fix doesn’t exactly speak the language of body acceptance.

Furthermore, the images and messages don’t go beyond the safe, upwardly-mobile striving of mainstream feminism. Verizon and GoldieBlox’s focus on how girls are discouraged from STEM studies is about as specific as the messaging gets; elsewhere, the lens is feel-good but safely generic. Most likely, we won’t be seeing ads from multinational brands that urge girls to help close the wage gap, battle colorism in media, or advocate for better labor conditions for the workers who make many of the products they’re being sold."

A June 13 Time piece on the “Inspire Her Mind” ad inadvertently gets at what’s unsettling about the newest breed of fempowerment ads. In it, Charlotte Alter writes, “While I admire the sentiment behind trying to encourage more girls to code, it’s a little suspicious that Verizon is getting on this bandwagon right after feminism is becoming a valuable brand.” The simple, offhand way in which Alter refers to a longstanding movement for civil rights and autonomy as “a brand” mirrors the ads themselves: We can sell tampons, diamonds, shampoo and deodorant with feminist rhetoric, so why not sell feminism itself? And to whom is this brand most valuable?

We live, as Peggy Orenstein once noted, in a half-changed world. It’s one in which Sheryl Sandberg calls herself a “pom-pom girl for feminism” and Miley Cyrus passionately states that she’s “one of the biggest feminists in the world,” while Elizabeth Warren and Hillary Clinton are branded “feminazis” for daring to voice commonsense opinions about things like equal pay or women’s reproductive healthcare. In this world, where the very question that has always been at feminism's core — Are women human beings with the same rights and liberties as men? — is still up for debate, there’s a larger conversation to be had about whether feminism should be treated as a brand at all.

Recent initiatives to “rebrand” the movement in order to make it relevant to a new generation and cast off its presumed legacy of hairy, unfuckable old broads shouting in the streets have come and gone without much resolution. But the march toward turning a political and social-justice movement into an easily digestible consumer option has already begun: It began as soon as the American Wool Council branded a “Liberated Wool Sweater” in the 1970s, as soon as Nike’s girls asked the world to let them play, as soon as “personal choice” and “empowerment” became an acceptable conflation of terms. The question now is whether the people who buy what Verizon, Always and the others are selling can also get on board with the more complex heart of the movement — the place where true equality is almost never an easy sell.

Andi Zeisler is the cofounder and editorial director of Bitch Media, and the author of "Feminism and Pop Culture." She is writing a book on how media and popular culture have transformed the feminist movement.