Right-wing judges push to gut Obamacare: What you should know re: Halbig case

Federal appeals panel just ruled to sharply limit ACA subsidies based on a drafting error. Here's what happens next 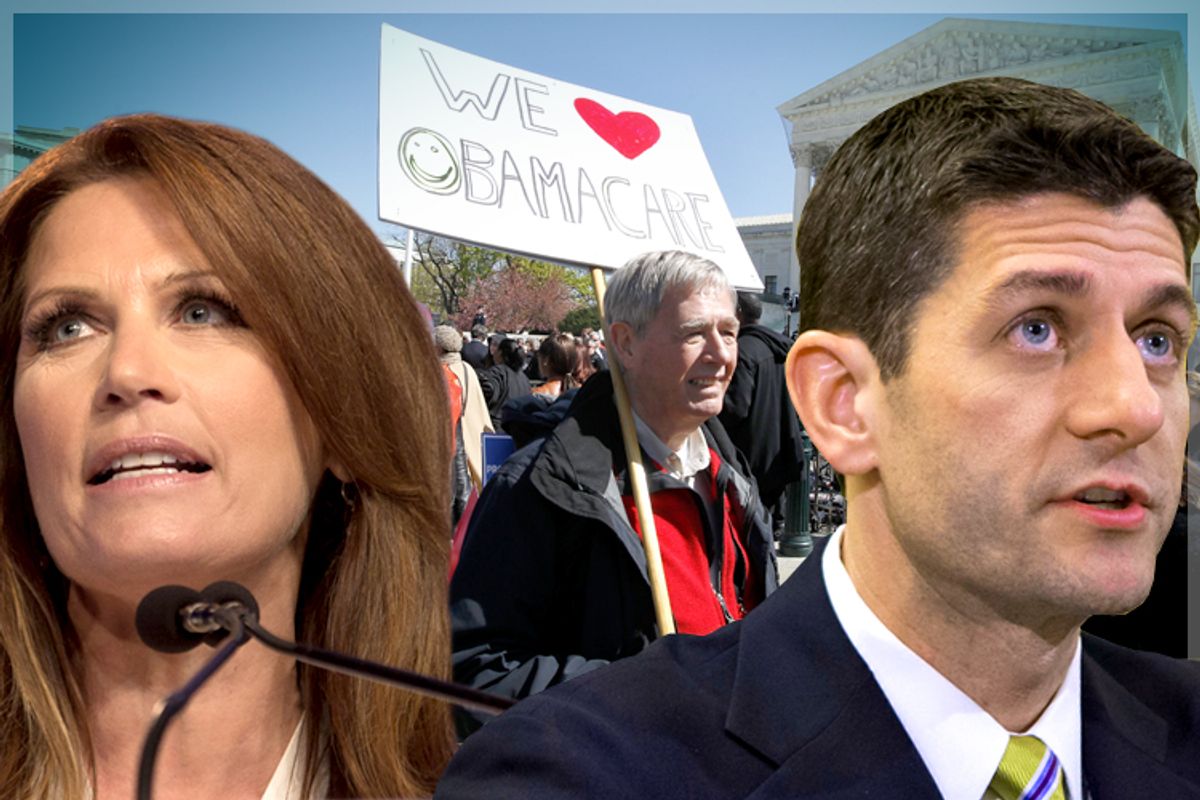 Just like that, the Patient Protection and Affordable Care Act's viability is once again in legal jeopardy. And over the most cynical objection, which two conservative judges have now declared meritorious.

A D.C. circuit court of appeals panel dropped its decision in Halbig v. Burwell Tuesday, and it was just what supporters of the law feared following contentious oral arguments from earlier this year. In a 2-1 decision, the panel reversed a lower court's ruling that the history and drafting of the ACA made it "clear that Congress intended to make premium tax credits available on both state-run and federally-facilitated Exchanges." The (Bush 41 and 43) judges on the appeals panel became the first court to find the opposite: "Because we conclude that the ACA unambiguously restricts the section 36B subsidy to insurance purchased on Exchanges 'established by the State,' we reverse the district court and vacate the IRS’s regulation."

The Affordable Care Act was designed to offer premium tax credits (subsidies) to people to purchase private health insurance on government-run exchanges -- at least those earning up to 400% of the federal poverty level. The belief among legislators was that the exchanges would be state-based, so the section of the law authorized subsidies to those enrolled "through an Exchange established by the State." As we know, though, some 36 states didn't end up setting up their own exchanges, and so they enrolled in, and received subsidies for, plans offered on exchanges set up by the federal government.

A few years ago, conservative law professors floated the idea that because of how the law was written, subsidies for those enrolled in plans through exchanges offered by the federal government were invalid. Defenders of the law argued that the intent of the law was obvious, even if the language wasn't as clear as it could have been. The challengers in Halbig, however, argued that this wasn't merely a drafting error: The "established by the State" language was Democratic lawmakers' intent, so as to induce states to set up their own exchanges.

The panel sided with the challengers, thus throwing out subsidies for millions of people enrolled through federal exchanges and throwing a crucial mechanism of the law out the window (if it holds -- more on that in a second.)

We reach this conclusion, frankly, with reluctance. At least until states that wish to can set up Exchanges, our ruling will likely have significant consequences both for the millions of individuals receiving tax credits through federal Exchanges and for health insurance markets more broadly. But, high as those stakes are, the principle of legislative supremacy that guides us is higher still. Within constitutional limits, Congress is supreme in matters of policy, and the consequence of that supremacy is that our duty when interpreting a statute is to ascertain the meaning of the words of the statute duly enacted through the formal legislative process. This limited role serves democratic interests by ensuring that policy is made by elected, politically accountable representatives, not by appointed, life-tenured judges.

Democrats who drafted the bill deserve some chastisement for not making their language clearer. But it's quite a sight to see conservative justices who've just blown a hole through Obamacare based on the logic of "neener-neener you forgot a couple of words!" claim the mantle of constitutional nobility.

The good news for supporters of the ACA is that this case has hardly played itself out. The Obama administration can seek a review of the ruling by the full bench, on which a majority of judges are Democratic appointees. (Here, you can thank Sen. Harry Reid for executing the "nuclear option" on judicial nominations.) The Justice Department has already announced it will seek such an en banc ruling. And until the final decision is made -- perhaps by the Supreme Court -- the government will continue offering subsidies to federal exchange enrollees.

And this may sound laughable, but there's always the possibility of a simple legislative fix to the law -- clarifying a paragraph or two. Democrats would have a political argument -- that Republicans are trying to take away health insurance from millions of people based on a drafting error -- that happens to be correct. It's just hard to see congressional Republicans, no matter how strong the pressure, act to tweak Obamacare instead of just letting it unravel and calling it a total failure in its construction.