Because if women were expected to have a lower professional and educational status, nobody would be married anymore 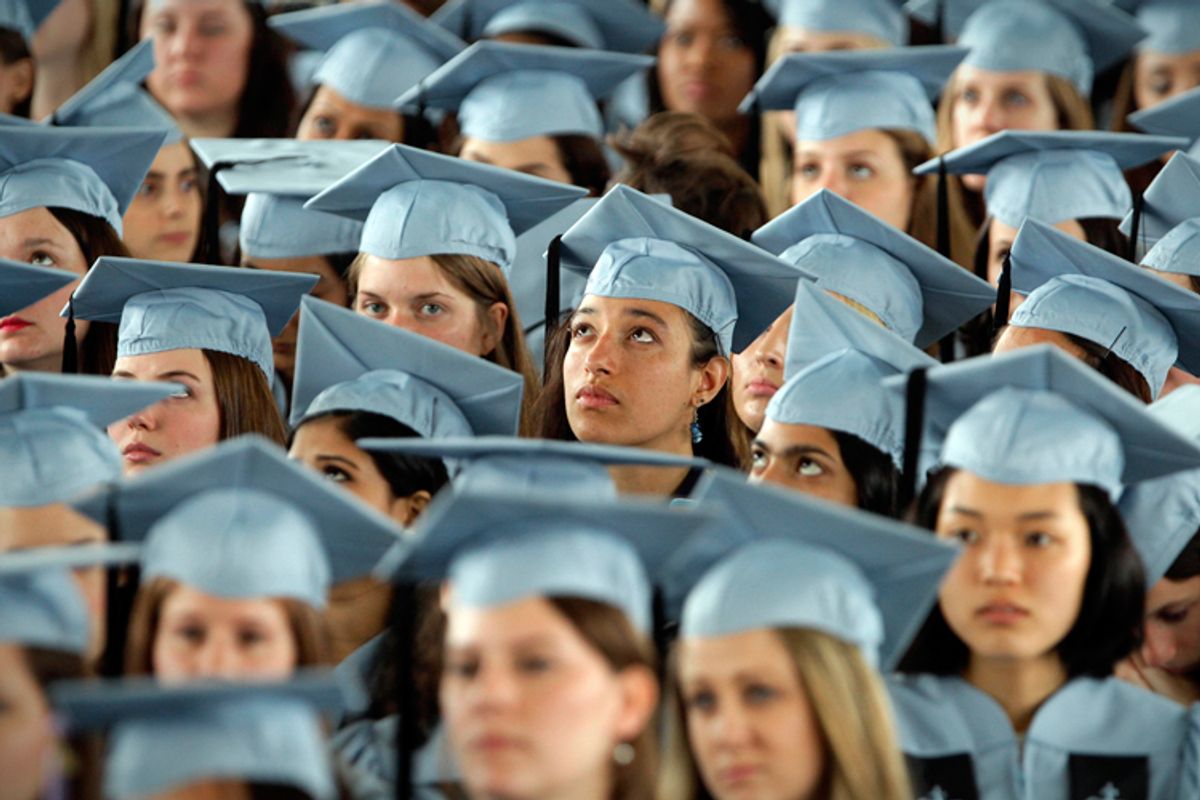 Women's college enrollment and completion rates have been exceeding men's since the 1980s, and that educational advantage doesn't seem to be slowing down anytime soon. Having a degree (or multiple degrees), however, wasn't previously considered an "advantage" in a marriage: For years, married women who achieved higher levels of education than their husbands were considered to be at higher risk of divorce, and higher graduation rates for women have been associated with a lack of success in romance. Researchers are just now finding that that's no longer the case, because -- shockingly -- as social norms change, people generally tend to adjust their expectations to fit new demographic realities.

The new findings, published in the August issue of the American Sociological Review, show that the educational attainment disparity in heterosexual couples has shifted overwhelmingly since the 1950s, transforming from one in which men have a huge advantage over women to a more egalitarian model. And, in instances where one partner does have more education than the other, chances are now that it's the woman. Among American couples that married between 2005 and 2009, over 60 percent that did have a difference in education featured a wife who was more educated than her husband. The number was nearly 35 percent in the early 1950s.

But, the researchers found, one of the most notable changes was in which marriages became less likely to end in divorce. Previously, marriages in which men had higher levels of education seemed to face less risk of divorce than those in which achievement was the other way around, or in which partners' educational attainment was roughly the same. But as college completion has become more common across the board, that's changed.

"We found that couples in which both individuals have equal levels of education are now less likely to divorce than those in which husbands have more education than their wives," said Christine R. Schwartz, lead author of the study and an associate professor of sociology at the University of Wisconsin-Madison. "These trends are consistent with a shift away from a breadwinner-homemaker model of marriage toward a more egalitarian model of marriage in which women's status is less threatening to men's gender identity."

The changes don't simply illustrate people's acceptance of the inevitable, but rather an endorsement of progressive change. Schwartz and her co-author, Hongyun Han, found that men and women have begun to form relationships with a new outlook on how relationships should be balanced -- which is to say that they should be balanced, as opposed to giving one partner a higher "status" than the other. As a result, the study suggests, many more educationally egalitarian couples are sticking together, because shifting gender expectations might allow these newer marriages to thrive.

"Rather than doggedly adhering to norms that wives should have lower status than their husbands, men and women are increasingly forming relationships in which women have the educational advantage -- so much so that it is now more common for wives to have more education than their husbands than the reverse pattern," Schwartz said. "The relationship between one's educational attainment, marriage formation, and risk of divorce appears to suggest that couples are adapting to the demographic reality that women have more education than men."