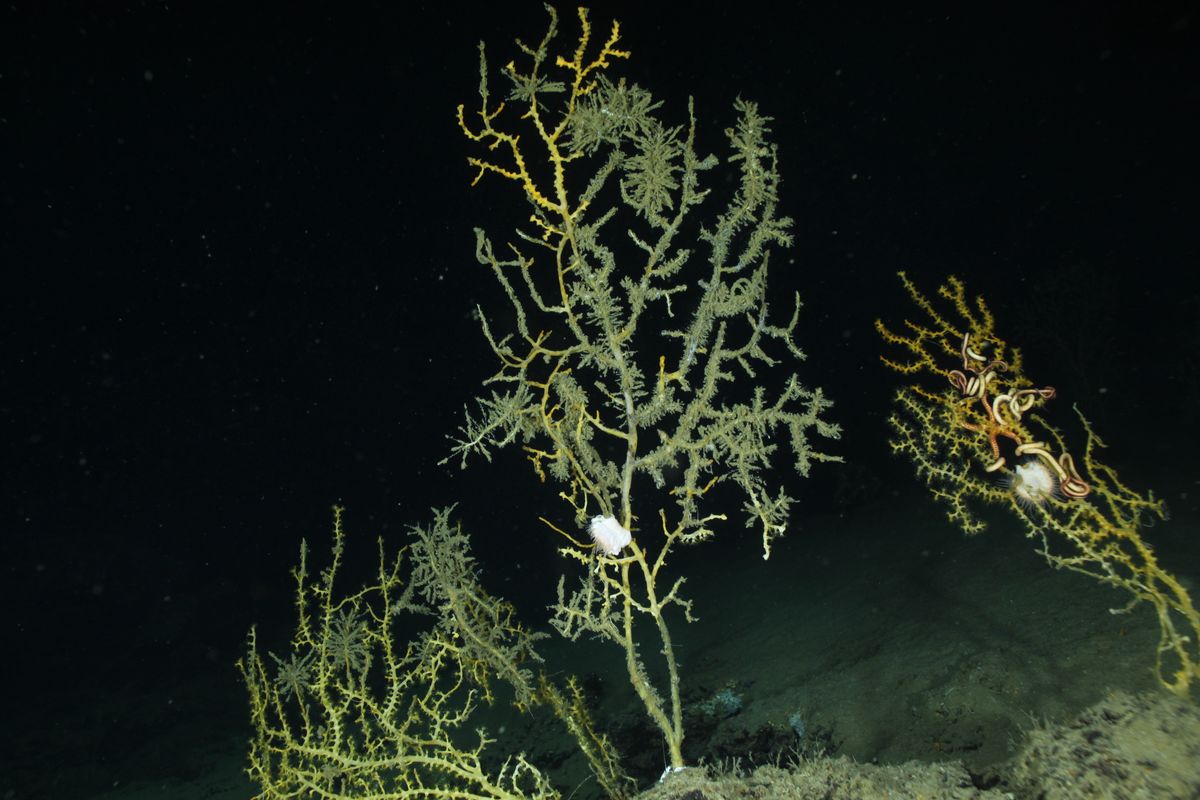 Several colonies of coral with attached anemones and brittle star from a previously discovered coral community 13 km from the spill site showing damage from the Deepwater Horizon oil spill. The extensive brown growth on the normally gold-colored coral is not found on healthy colonies. (Fisher lab, Penn State University)
--

More than four years after an explosion sent over 200 million gallons of oil gushing into the Gulf of Mexico, BP continues to insist that the damage wrought by its infamous Deepwater Horizon spill wasn't so bad -- and the evidence to suggest otherwise continues to pile up. The latest study to suggest that all isn't well in the Gulf, published in the journal Proceedings of the Natural Academy of Sciences, documents the presence of damaged coral located nearly twice as far away from the damaged well and 50 percent deeper than those that had been discovered before, "considerably expanding" the area believed to have been affected by the spill.

Corals, a team of researchers led by Penn State biology professor Charles Fisher explains, are important indicators of deep-sea health: They are constantly interacting with the water around them, and if, say, a plume of oil overtakes them, they're unable to relocate to cleaner waters. They can live for hundreds, even thousands of years, so natural deaths are relatively rare. And when one does die, it leaves behind a skeleton that disappears slowly, serving as a record of sorts of its life and death.

This is precisely what happened in the Gulf. The researchers first documented the impact of the spill on coral colonies back in 2010, about three months after the damaged well was finally capped. They discovered corals about 7 miles away from the spill site, and more than 4,o00 feet deep, that showed "widespread signs of stress" -- findings that, they wrote, "underscore the unprecedented nature of the spill in terms of its magnitude, release at depth and impact to deep-water ecosystems." Testing, they added, confirmed that oil found at the site carried Deepwater Horizon's chemical footprint.

"We would not expect deep-water corals to be impacted by a typical oil spill, but the sheer magnitude of the Deepwater Horizon oil spill and its release at depth make it very different from a tanker running aground and spilling its contents," said Helen White, the lead author of the resulting paper, which was published in 2012. "Because of the unprecedented nature of the spill, we have learned that its impacts are more far reaching than those arising from smaller spills that occur on the surface."

BP was quick to play the plausible deniability card: In a letter also published in PNAS, two BP scientists argued that the link between the damaged coral and the Deepwater Horizon spill was "premature," and that the team had leaped to its conclusion without properly considering other explanations, such as the possibility that the damage was caused by oil that naturally seeps in from the sea floor. But in their reply to the reply, the team remained adamant that what they were seeing was pure BP. The odds that something else had happened in the same place and at the same time to cause the observed damage, they calculated, were approximately 1 in 10,000.

The team's newest study only underscores the conclusion that, yes, BP oil managed to damage deep-sea coral communities -- and it presents compelling evidence that the impact was "deeper and wider" than first believed. It expands the range of damage to more than 13 miles away from the well, and nearly 6,000 feet deep. The oil itself was largely gone, but, explained Fisher, "we were able to identify evidence of damage from the spill in the two coral communities discovered in 2011 because we know exactly what our model coral colonies, impacted by the oil spill in 2010, looked like at the time we found the new communities."

BP's oil operations, of course, aren't the only human activity happening in the Gulf -- and the blowout, while larger than any other accidental spill in history, isn't the only thing damaging deep-sea life. The researchers note that they also found commercial fishing line tangled in corals not impacted by the spill. BP is just unique, in that it's the only one trying to deny that its actions could have significant or lasting impacts.