Another mom arrested for sending her kid to the park

Why are parents being punished for giving children independence? 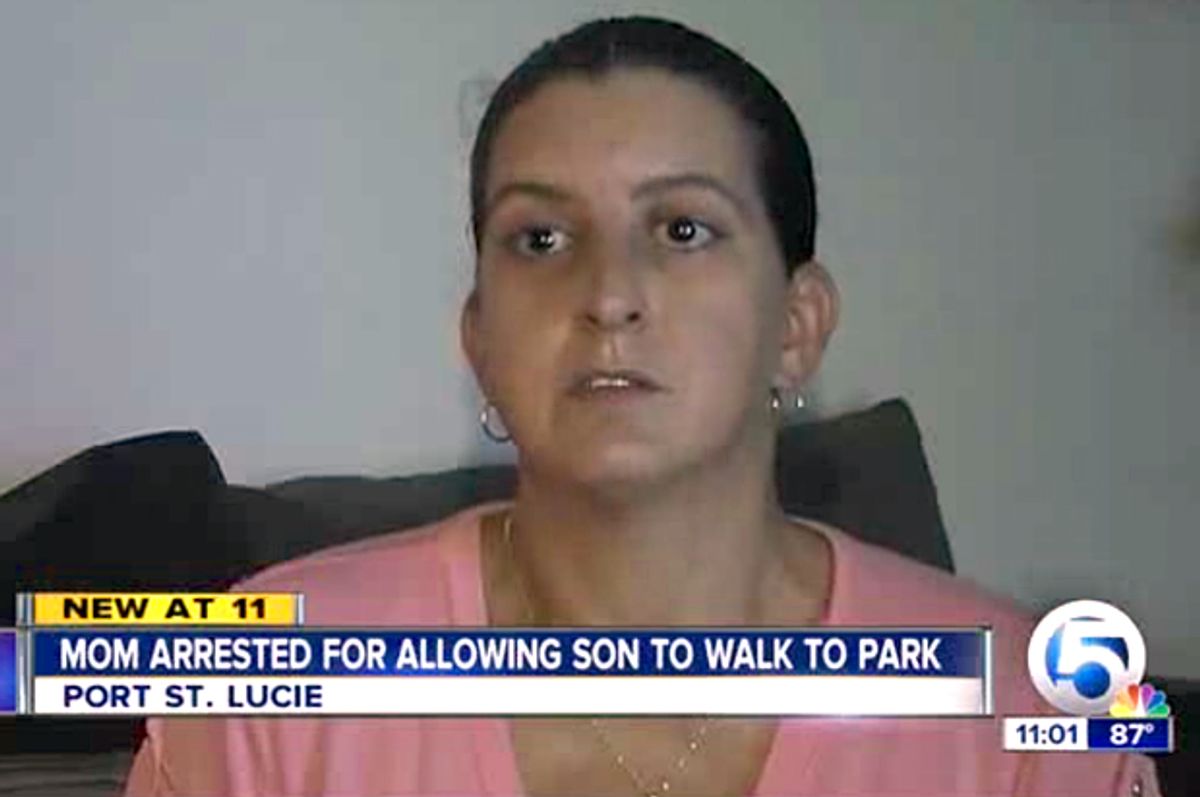 "I'm totally dumbfounded by this whole situation," says Nicole Gainey. She's not the only one. The Port St. Lucie, Florida, mom was arrested on Saturday for letting her 7-year-old son, Dominic, walk alone -- in the daytime, with a cellphone -- a half-mile to a local park. "I honestly didn't think I was doing anything wrong," she says. "I was letting him go play."

During his approximately 10-minute walk, the boy passed by a public pool, where a patron asked him where his mother was and other questions. As he told a local news station, "I got scared and ran off to the park, and that's when they called the cops." Police picked up the boy at the park, brought him home and arrested his mother for felony child neglect. In their report, police noted that "numerous sex offenders reside in the vicinity." Gainey says the cops "just kept going over that, you know, there's pedophiles," which sounds to me like the kind of problem that perhaps there's a better approach to than whisking kids off playgrounds and arresting mothers. The state's sttorney's office notes that there is no law regarding how old children can be before they can travel unaccompanied.

Yet punishing parents seems to be easier than, say, targeting potential offenders. Earlier this month in South Carolina, Debra Harrell was arrested for sending her 9-year-old daughter to play in a local park while she was at her job at McDonald's. The daughter was briefly put in the custody of the Department of Social Services, and Harrell's lawyer told the media she'd subsequently lost her job. She is now, fortunately, both back with her daughter and at work, and a crowd-funding effort to help her pay her legal fees has raised over $40,000. But Harrell, who has a court date in September, still faces up to 10 years in prison if convicted of neglect. And Gainey has had to pay nearly $4,000 to bond out after her arrest. She says she will fight the neglect charge but won't send her son out alone anymore for fear of a further visit from the police.

Of course, horrendous things can happen to children when they're not under their parents' watchful eyes. Last week 14-year-old Michigan teen April Millsap was murdered while walking her dog on a wooded trail near her home. But the reality is that as few as 10 percent of sex offenses against children are perpetrated by strangers. And 7-year-old Dominic, when approached by a stranger asking personal questions about the whereabouts of his mother, proved he had the instinct to run the hell away. Are there risks in sending our kids out into the world without supervision? You bet. Is every kid unique, and does every family have to gauge for itself what a child can handle? Absolutely. But the danger to families shouldn't be coming from perhaps well-intentioned but ultimately ignorant strangers, and from misguided law enforcement officials. Arresting mothers scares children. Separating kids from their parents scares children. A walk to the playground should not be a traumatic experience. And keeping kids safe means raising them to be competent and independent, and that's hard to do when their parents are being punished for teaching them to be competent and independent.