Why do only angry Republicans have any power in their own party? The answer lies in its pivot to the South 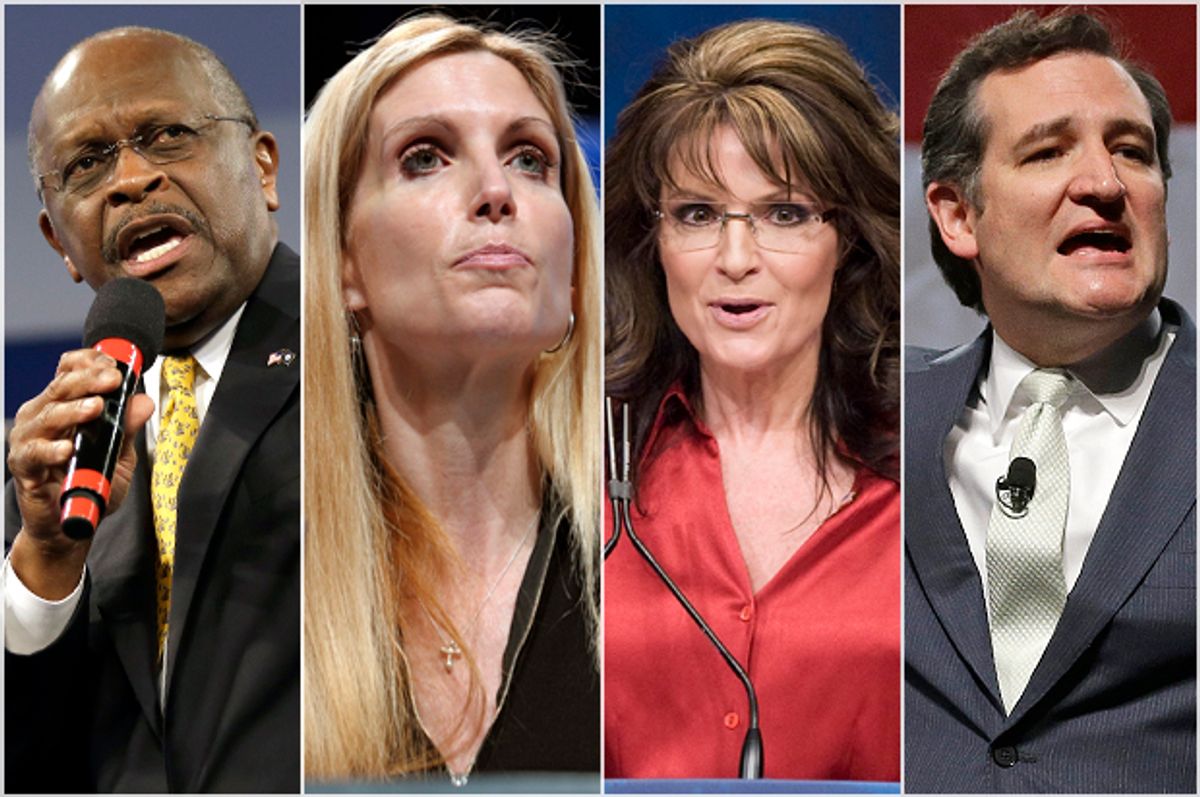 A few months back, a day after the Republican Leadership Conference kicked off in New Orleans, Jamelle Bouie wondered in Slate “Why the Republican Party attracts provocateurs, faux martyrs, and grifters in droves?” It’s a great question. Bouie noted the speakers whose presence would raise doubts about any political body that invited them to appear -- from the vermiculate gasbag Donald Trump to the hucksters Herman Cain and Sarah Palin. And he provided examples of how the inflamed rhetoric of these figures has become the vernacular of the Republican Party as a whole. But in the end, his answer to his own question seemed disappointingly wan:

“[I]n our world, the energy of the conservative movement -- and thus the Republican Party -- is geared toward these people. If you want money and attention, you could do worse than become a conservative provocateur."

In other words, where there is lots of resentment there will be lots of suckers. And -- this being America -- where there are suckers, there will always be con men (and women) ready to relieve them of their hard-earned cash. The Republican obsession with repealing the Affordable Care Act, Bouie writes, is not grounded in any realistic political calculus; it endures because it’s “lucrative.” He quotes Robert Costa’s claim in National Review that “Business has boomed since the push to defund Obamacare caught on. Conservative activists are lighting up social media, donations are pouring in, and e-mail lists are growing.”

It’s not that any of this is wrong; quite the opposite. Bouie describes very clearly the nexus of right-wing outrage, abundant cash, new forms of media, and self-involved shills that drives Republican politics. But as a liberal who suffered through the Nixon, Reagan and Bush II presidencies, I can attest that there has been no shortage of outrage on the left. The salient fact is that this anger, and the suspicion and paranoia to which it sometimes gave rise, never had the authority for Democrats that right-wing angst now has for Republicans.

After the 2006 midterm elections, when general revulsion at Bush and his policies gave Democrats complete control of Congress, Nancy Pelosi, newly elected speaker of the House, quickly brushed aside any talk of impeaching the president. Such ideas, she said, were “off the table” -- and that was the end of that. But nowadays even “establishment” Republicans such as South Carolina Sen. Lindsey Graham glibly opine that President Obama may merit impeachment. What we need to explain, then, isn’t why pissed-off Republicans are easily parted from their money; it’s why only pissed-off Republicans have any power in their own party. Bouie gives us the “how” of this situation, but -- his own excellent question notwithstanding -- he doesn’t give us the “why.”

To get to why, we need to add one additional element to the nexus of forces mentioned above: the transformation of Republican politics produced by the GOP’s pivot to the South after the Democratic Party’s embrace of racial equality alienated Southern whites.

The Republican Party has long been the natural home of monied interests. In itself, there’s nothing objectionable about this; capital has distinctive concerns, after all, and it can be argued that Republican advocacy of these interests within our political system has in the long run been a source of stability. In the decades that stretched from the end of the Civil War until the 1960s, the party drew its most reliable support from successful capitalists and those who wanted to be -- the Captains of Industry on Wall Street and elsewhere, and the Rugged Individualists of the rural Midwest and small-town North. This Republican Party was not averse to government action when it furthered some pressing social need; Abraham Lincoln signed legislation creating the National Academy of Sciences, for example, and Theodore Roosevelt was an early champion of Progressive-era economic reforms. The party’s suspicion of federal power was rooted in a pragmatic sense of costs-and-benefits and a moral commitment to the ideals of self-sufficiency and personal advancement.

This situation began to change in the early 1960s, when it became clear that the Democratic Party had taken up the cause of equal rights for African-Americans. White Southerners, repulsed, shrugged off their generational anger at the party of Lincoln and increasingly supported Republican presidential candidates. Over the next 50 years, this shift in loyalties gradually extended into state Houses as well. After the Tea Party wave in the 2010 midterms, Democrats controlled both houses in only two out of 14 Southern legislatures.

This enormous electoral windfall -- the fruits of the GOP’s notorious “Southern Strategy” -- created a tectonic shift in the party’s internal balance of power. With their fortunes increasingly tied to this new Southern electorate, Republican leaders and strategists did their best to placate it and to leverage its intensity. To borrow a phrase from the days of the Cold War, it is “no accident” that this same period charts the party’s adoption of ever more radical versions of conservative policy. The GOP’s relentless march to the right, its embrace of a dramatically darker, harsher ethos, are direct results of its shift to the South. For many of these new Republicans, federal power was not suspect on pragmatic or aspirational grounds; it was suspect because it favored the shiftless and the inferior, because it took from the deserving to reward the undeserving. It was nothing more (or less) than the agent of an ancient racial and class enemy.

This is the context in which we must place the other structural changes Bouie describes. New forms of media -- and adaptations of older forms, such as talk radio -- arose to express and exploit the disaffections of this electorate. Rush Limbaugh and Ann Coulter, Glenn Beck and Laura Ingraham, may well believe every word they say, but they are primarily performers with a vested interest in the well-tended outrage of their audiences. Thus fresh outrages, every day, must be sewn, fertilized and reaped.

The rise of right-wing “news” platforms (Drudge, Fox, Breitbart) has created an almost seamless web of white rage, a wall of (conservative) sound even Phil Spector would envy. It allows entertainers like Limbaugh to discuss something as “fact” because it was mentioned by “journalists” on, say, Fox News, while the latter can report (and thereby sanction) the wildest, rankest routines of Limbaugh & Co. because their provenance makes them “newsworthy.” The pathetic (if hilarious) spectacle of Republican worthies rushing to delete tweets celebrating the release of Bowe Bergdahl -- the entertainment-journalism complex having ruled against him -- is only the latest demonstration of its immense power over the GOP.

The economic booms of the ‘80s and ‘90s -- and the even older money, corporate and personal, that has long allied itself with the GOP -- have provided more than enough capital to fund these ventures and other enterprises (think tanks, PACs, etc.) with the same proprietary interest in right-wing resentment. But the GOP electorate, of course, has not been unchanged by this generational effort to inflame its passions and put these to good use, political and financial. With each turn of the screw, whether by Republican political strategists or by clever media figures, the electorate has been asked to endorse a series of increasingly extreme policies and positions. The result is a highly “purified” block of voters and activists who identify politics with their own bottomless sense of grievance. The result, in other words, is the Tea Party.

Republicans are now discovering the truth of Jacques Mallet du Pan’s adage that every revolution “devours its young.” (Anyone who doubts this should consult Eric Cantor.) Because the Tea Party — really just the most feverish and obdurate part of the Republican “base” -- has decided that there are worse things than losing elections. Having been told for years that its resentments are righteous and that the righteous must give no quarter to the wicked -- no compromises! no negotiations! -- it has quite reasonably opted to stand on “principle” ( as Ted Cruz puts it) even if this means coming up short at the ballot box. To put this point just a bit differently, it no longer thinks of governing as its primary purpose. It would like to govern, of course; it has an agenda, one it longs to enact; but its principal concern is to preserve its identity as the last redoubt of “pure” Americanism.

Governing takes place in the real world, and it tethers a political party to some minimum respect for brute fact. When a faction releases this tether, though -- when it gives up any real interest in governing -- it is free to build a program based on fantasy rather than fact. This, more than anything else, explains the Tea Party’s endless affection for paranoid schemes and patent absurdities -- Obama was born in Kenya! Hillary Clinton watched Chris Stevens die on closed-circuit TV! Climate change is nonsense! -- and its utter helplessness before those who peddle them.

And here’s the rub. Because the Republican Party as a whole, of course, still wants to govern. The Captains of Industry -- many of them, anyway -- live in the real world and want to shape it to their advantage. (Even the Kochs demurred when it looked like House Republicans might push the country into default last year.) So do millions of sensible, rational Republican voters. But they are now reaping the fruits of their party’s attempt to exploit the passion of its most atavistic elements -- a strategy they are complicit in, if only through their silence. To win elections, they mortgaged themselves to a sect that, it turns out, has other priorities. Now they find themselves inextricably associated in the public mind with its addled obsessions. Most Republicans do not believe that the Affordable Care Act is a totalitarian scheme, or that Obama is a jihadist, or that the vagina is a weapon of mass destruction. But in the minds of many Americans, a vote for a Republican presidential candidate is a vote for someone beholden to people who believe all these things and more.

The relevant text for understanding the Republican “civil war,” then, isn’t so much "Uncle Tom’s Cabin" as "Frankenstein." The party is now riven into three parts: a donor class that, like the rank-and-file, mainly wants to win elections and to govern the country in a (relatively) responsibly conservative way; a ferocious cell of right-wing fabulists that prefers defeat to the slightest modulation in its hatred of the modern world; and a network of entertainers and “journalists” with an entrepreneurial investment in promoting the second group at the expense of the first. This leaves the latter in an increasingly exposed position. As Bouie perceptively writes, “[M]ainstream Republicans … have to affirm extreme ideas (i.e., 'self-deportation') to pass muster with the conservative base, and in the process, hurt themselves with ordinary voters.”

It isn’t easy to see how these tensions resolve themselves except through a conclusive electoral repudiation of one side or the other. It’s as if a film studio started work on a project, but the executives and crew thought they were making "Cosmos" while the cast and publicists thought they were making "Alien." Care to guess which of these would prove more popular in red state America? In Republican politics these days, no one can hear you think.