The sad desperation of the "Redskins Facts" site

Who's really behind the "growing online community"? 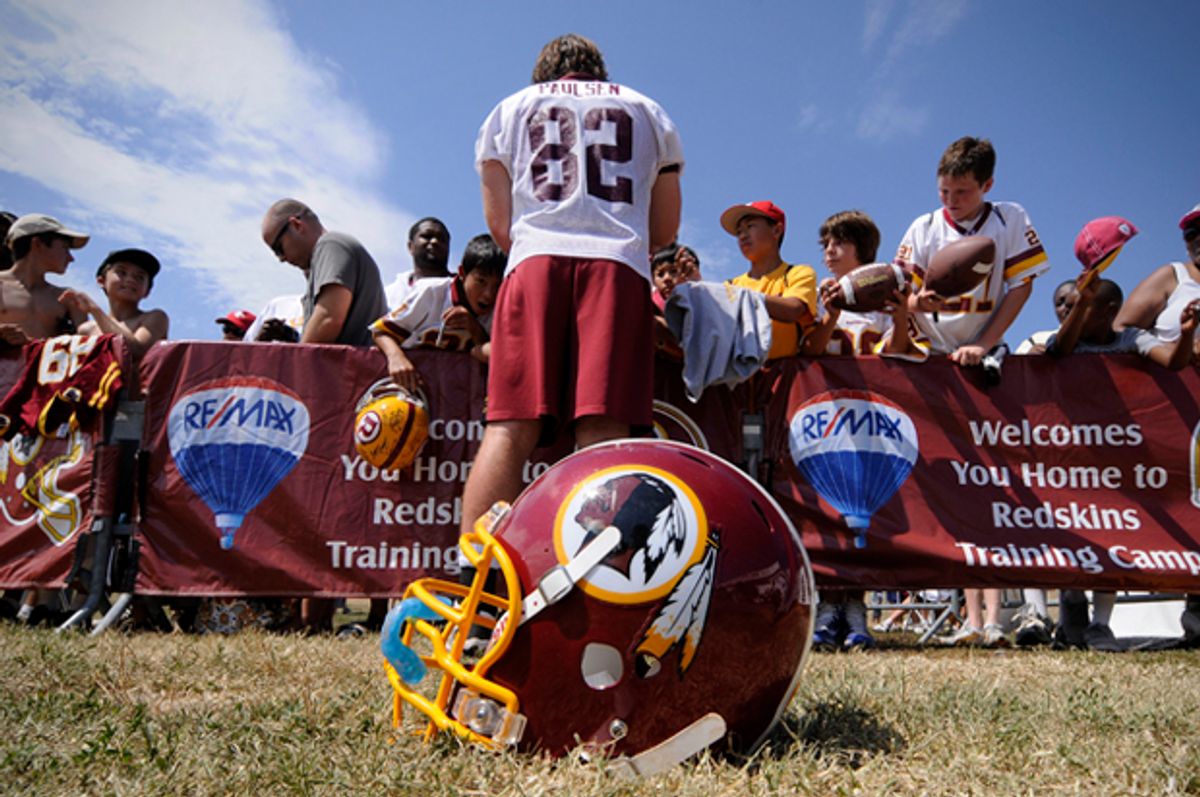 Say what you will about what the team itself does on the field, but there's no denying that the institution of the Washington Redskins is flailing like freshly caught carp on a dock right now. Last month, the U.S. Patent Office Trademark Trial and Appeal Board ruled that the team's name was "disparaging to Native Americans," canceling six federal trademark registrations and inching its hotly debated nomenclature closer toward a change. But while the fight to keep the name rages on, the "community" behind the team has launched a new "Redskins Facts" site to sway public opinion -- and oh, Lordy, is it hilariously misguided.

This week, ads on the Washington Post and Sports Illustrated sites began trumpeting the new outpost for "a growing online community of passionate Washington Redskins fans and others" and vowing to offer "historical evidence to fair-minded opinion leaders on both sides of the issue so ongoing discussions can be constructive." That community, however, is so far made largely of its official sponsors, team alumni Gary Clark, Chris Cooley, Mark Moseley, Ray Schoenke and Roy Jefferson. Speaking to Slate Tuesday, team spokesman Tony Wyllie did not directly state how the site was being funded, but declared, "The alumni and the Redskins have a long history of supporting each other and this education effort is no different. So where it is appropriate for the alumni to pay for expenses then they will and when it is appropriate for the Redskins then the organization will. Since it is so early in the education effort there is no easy breakdown available." Slate also notes the compelling connection between the site and Burson-Marsteller, a P.R. firm that touts itself as one to call on "when the stakes are high: during a crisis, a brand launch or any period of fundamental change or transition." And Deadspin further finds that among the first followers of the site on Twitter were Burson-Marsteller employees. Smooooooooth.

Let's take a gander at this "education" effort anyway. In a video on the site, Tony Woods, a member of the Chippewa Cree Tribe and manager of the Team Redskins Rodeo club, says, "I'm offended, really, that somebody's out there claiming that they speak for me ... There are bigger issues to deal with than a name." The team's foundation, by the way, sponsors the rodeo club, and has provided iPads for the reservation's schools. And there's more. As writer Jesse Berney pointed out Wednesday on Twitter, nothing's so convincing as "a photo of white dudes yelling and shaking their fists to prove our team name isn't racist." I'm fond of the "We're all Redskins" on game day image -- featuring a sea of white arms. And there's the site's explanation that "We believe the Redskins name deserves to stay. It epitomizes all the noble qualities we admire about Native Americans — the same intangibles we expect from Washington’s gridiron heroes on game day. Honor. Loyalty. Unity. Respect. Courage. And more." That sums up Native Americans. In general. Did you know that there are 566 federally recognized American Indian tribes and Alaska Natives in the U.S.? Did you know that different social and ethnic groups have different traits, or that sweeping generalizations that put separate groups under one label, even when those generalizations are favorable, are still kinda dumb and insulting? The "facts" go on to argue that "the Redskins name is a self-reference in the context of the football team itself — and in no way should it be considered a slur targeted at a specific ethnic subgroup of Americans." And if you do consider it a slur, you're wrong! I haven't seen this much boastful ignorance since HuffPo decided it'd be cool to do a slideshow of "Proof That Once You Go Black, You Never Go Back."

If you have something of true integrity to offer, you don't really need all the subterfuge and the argument that "full-blooded Native American entertainer Wayne Newton" is on your side. You don't need to launch a dubious "community" to "educate" the public about all your reasons to cling desperately to a name that's a relic of an era long past, a relic that has an undeniably offensive history. You grow up and move on. That's a fact.