4 reasons GOP's new "war for women" is a ridiculous joke 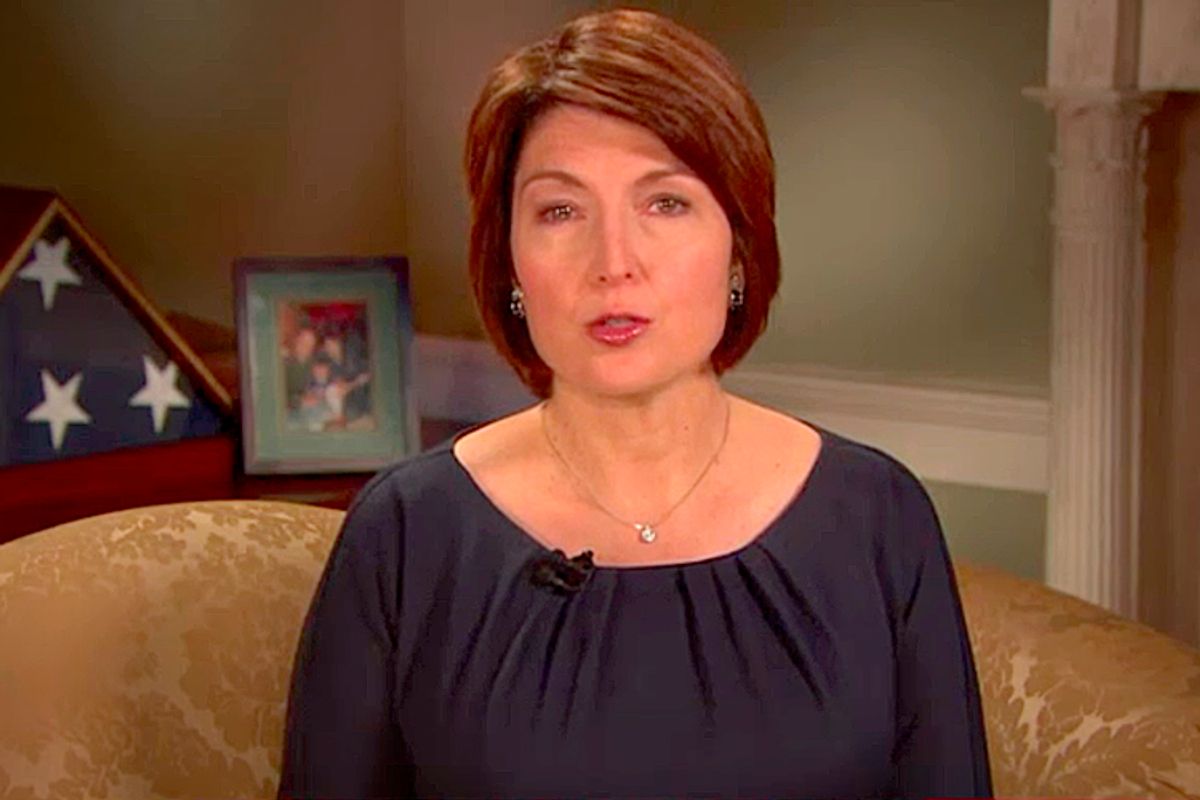 On Wednesday, a group of GOP lawmakers led by Representative Cathy McMorris Rodgers (R-Washington) unveiled a package of bills directed at improving the economic circumstances of American women. The intended goal of the legislation—which includes tax credits for childcare and a bill that prevents retaliation against employees who ask about equal pay—is to demonstrate that the Republican Party does in fact care about women’s rights. As Representative Mike Coffman (R-Colorado) said at the press conference announcing the bill package, he’s proud to stand by his colleagues in a “war for women.” Unfortunately for Coffman and the rest of the House GOP leadership, their legislation is actually just a laughably belated, transparent, last-ditch effort to attract female voters before the midterm elections in November.

Republicans certainly need to improve their messaging towards women; as the Washington Post pointed out, Mitt Romney lost the female vote to President Obama by 11 percentage points in 2012 and polls consistently show that respondents trust Democrats over Republicans to handle issues that directly affect women. But this package of bills is too little, too late from a party that has worked to systematically dismantle women’s rights to health care, reproductive choices and fair pay. There are too many examples to count, but here are four of the most egregious Republican attacks on women—and reasons that no one could take their newfound interest in gender equality seriously.

GOP leaders have puzzling ideas about why women choose to use contraception. Instead of seeing birth control as a medication that helps women avoid pregnancies they don’t want and can’t afford, and make their own long-term life decisions, Republicans view contraception as a license to have crazy amounts of sex and abuse federal finances to kill unborn children. (Because God forbid that anyone would want to have sex without the explicit purpose of having a kid.)

Former Arkansas Governor Mike Huckabee caused a mini-firestorm back in January when he first tried to flip the GOP “war on women” rhetoric on its head. At the Republican National Committee’s winter meeting, he told the audience, “If Democrats want to insult the women of America by making them believe that they are helpless without Uncle Sugar coming in and providing for them a prescription each month for birth control, because they cannot control their libido or their reproductive system without the help of the government, so be it.”

Huckabee is hardly the first conservative to imply that women who use contraception are somehow morally depraved (Rush Limbaugh memorably called health activist Sandra Fluke a “slut” for advocating for contraception coverage). But this misguided, profoundly misogynistic thinking about birth control has real consequences. The most recent example is the Supreme Court’s devastating ruling in the Hobby Lobby case, which struck down the contraceptive mandate of the Affordable Care Act, allowing employers to claim religious exemptions for providing certain contraceptives for their female employees. Earlier this month, Senate Republicans blocked a bill aimed at restoring free contraception for women who get their health insurance from companies with religious objections. Because in a perfect GOP world, employers should be able to regulate female sexuality and access to healthcare according to their own moral grounds.

If Republicans hate contraception, don’t even get them started on abortion. But really—don’t. Conservatives (particularly middle-aged male ones) have made more sexist, anti-scientific and plain offensive statements on this topic than any other. There was the outrageous comment by Missouri Republican senate candidate Todd Akin about how victims of “legitimate rape” very rarely get pregnant and Maine representative Lawrence Lockman’s repugnant suggestion that if abortion is legal, rape should be too. The president of the Susan B. Anthony List, an anti-abortion group that hosts boot camps on how politicians should discuss abortion, recently advised Republican leaders to keep their public remarks on the subject as brief as possible. As she told officials at the spring RNC meeting, “Two sentences is really the goal. Then stop talking.”

Beyond the gaffes and complete disregard for women’s federally-mandated right to decide whether or not they want to bear and raise a child, GOP lawmakers have waged a state-by-state war to eliminate women’s access to the procedure. From imposing unfeasibly strict regulations on abortion clinics to requiring women to have an ultrasound before they have an abortion, Republican officials have repeatedly made it clear that their beliefs about abortion are more important than those of the women affected by such legislation. In case their tendency to privilege the right of the fetus over that of the woman carrying it wasn’t clear enough, the 2012 GOP party platform has a passage that reads, “We assert the sanctity of human life and affirm that the unborn child has a fundamental individual right to life which cannot be infringed.”

3. Voting Against Equal Pay for Women

It is the height of irony that the new package proposed by McMorris Rodgers et. al. includes a bill that prevents retaliation against employees who inquire about equal pay. This has been a core part of the Democratic economic agenda since at least last year, when House Democrats unveiled their own agenda called “When Women Succeed, America Succeeds.” Republicans have consistently voted against fair pay measures, most recently in April when they blocked Democrat’s third attempt in recent years to pass wage equality legislation. The Paycheck Fairness Act would have made it illegal for employers to retaliate against workers who talk about their salaries with their coworkers and required the Equal Employment Opportunity Commission to collect pay information from employers.

Conveniently ignoring the persistent wage gap (women earn 77 cents for every dollar that men earn), conservative lawmakers have long argued that such a bill is irrelevant since gender-based discrimination is already illegal. Back in April, Representative Lynn Jenkins (R-Kansas) went so far as to say that this type of legislation is “condescending” towards women. Yet now, it seems, they are changing their tune and adopting a cornerstone of the Democratic economic agenda as their own.

4. Compounding the Burden on Working Moms

Several other key parts of the bill package are direct rip-offs of Democratic legislation and focus on issues that the GOP has long seen fit to ignore. These include tax credits for childcare and a bill that allows employees to trade overtime pay for paid family leave and sick leave. House Democrats have already proposed these ideas (though they recommended mandatory sick and family leave), as well as paid maternity leave and a wealth of other legislation aimed at accommodating working mothers. Republican leadership has not brought those bills to the floor for a vote.

For a party that is supposedly so interested in family values, the GOP has demonstrated an appalling lack of concern for the difficulties faced by working moms. From eliminating Head Start funding to cutting federal funding for childcare programs, Republicans have repeatedly asserted that women’s access to employment is superseded by family responsibilties.