How not to avoid a bad online review

A hotel feels the Internet's wrath for its reviews policy 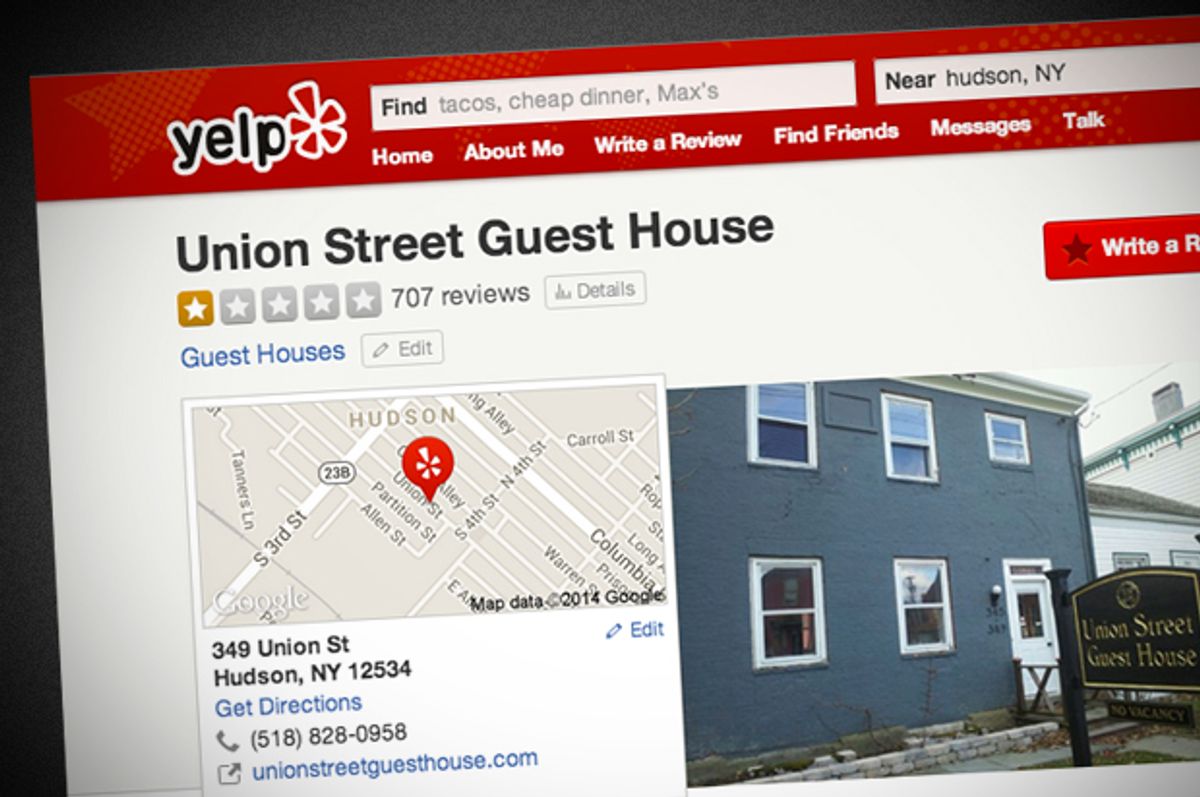 Stopping by Hudson, New York, and looking for a place to stay a spell? Maybe you'd like to try the Union Street Guest House. But be warned: The current forecast in town calls for a crapstorm.

On Monday, the New York Post's Page Six noted that the hotel, located "near Catskills estates built by the Vanderbilts and Rockefellers," had a written policy toward wedding guests warning them to "Please know that despite the fact that wedding couples love Hudson and our inn, your friends and family may not." And if they don't, there may be a problem. "If you have booked the inn for a wedding or other type of event and given us a deposit of any kind, there will be a $500 fine that will be deducted from your deposit for every negative review placed on any internet site by anyone in your party. (Please NOTE we will not charge this fee &/or will refund this fee once the review is taken down). Also, please note that we only request this of wedding parties and for the reasons explained above." The Post also noted, by the way, that the proprietors have responded to online criticism with claims of "mean spirited nonsense" and "she made all of this up." We haven't seen this much poor handling of social media since Amy Baking Co. went viral last year for its no "SLUTTY BITCHES LIKE YOU" policy toward its online critics.

If there are two things the Internet doesn't lack for, they'd be amateur critics and people who don't like being told what to do. Within hours of the Page Six story,  Yelp was teeming with reviews for the place – some just simple one-star affairs, others that more colorfully describe it as "the bobbing diaper floating in the belly of a porta-potty" or a place whose "vintage bed clothes gave me herpes." The Streisand Effect gets mentioned more than once too. My favorite is the reviewer who claims the hotel will also revoke your deposit "If, during 'Love Shack' by the B52's,  any attendee shouts 'TIN ROOF RUSTED.'"

Facing an onslaught of online critics who haven't left them substantial deposits, the hotel had to move quickly to go into damage mode. (When Salon tried to call the hotel for comment Monday, no one answered the phone. A 2012 TripAdvisor post from the owners notes, "Yes, we do not return phone messages and we make that very clear," so perhaps not answering phones is their thing.) The policy about negative reviews, meanwhile, was scrubbed from its site – though you can still read it as evidence. It also still retains its unique cancellation policy, which warns, "Due to our size, cancellations affect us greatly and we cannot make exceptions for any reason. This includes weather, family issues, personal issues, illness, or anything that is not something we can control." I'm also intrigued by the note that "We are not responsible for left, lost or stolen Items. If you leave something in your room we will do our best to recover it for you. However, due to our small staff, we do not guarantee when or if it will indeed be returned." Indeed! And if you want to feel you've stepped into another era, the Contact Us page features an image of a Radio Shack computer with the word "EMAIL" on it.

Businesses fighting back against bad reviews has become more common in recent years, but not everybody knows how to handle it with a finesse that won't make things worse. Speaking with New Tech City in April, Scott Michaelman, an attorney for a couple who were ordered to remove a negative review -- and then financially penalized by a retailer when they didn't – said, "Just by contacting a consumer and telling him or her, 'You must take your criticism down," the company has succeeded in intimidating the consumer and possibly deterring other consumers from posting criticism of that company."

Writing on the hotel's Facebook page Monday, the proprietors claimed that "The policy regarding wedding fines was put on our site as a tongue-in-cheek response to a wedding many years ago. It was meant to be taken down long ago and certainly was never enforced" -- an assertion that has been met with some degree of speculation. As several posters with the ability to scroll through information on the Internet were quickly able to ascertain, back in November, a Yelp reviewer wrote, "The management of this hotel had the gall to email us twice to threaten us financially about the negative review! Here is an excerpt from their first email: 'Please note that your recent on-line review of our Inn will cost the wedding party that left us a deposit $500.This money [will] be charged via the deposit they have left us unless/until it is removed. Any other or future reviews will also be charged to the wedding party (bride & groom) from the guarantee they have provided us.'" Sounds remarkably like what they claim was a "tongue-in-cheek" response that was "never enforced."

Based on its photographs, the hotel seems like a pleasant looking place, and it's entirely possible that a guest might go there and have a satisfying experience. The reviews on TripAdvisor, from before the deposit fiasco, are mostly positive, though you will find some comments about the attitude of the staff and responses from the owner sniping, "So sorry you don't get our style." Perhaps that's what it all comes down to – a question of style. And if you want to assure that you're not drowning in negative online reviews, it's a good idea to have one that people aren't going to make fun of you for.