Are America's "gayborhoods" dying out? 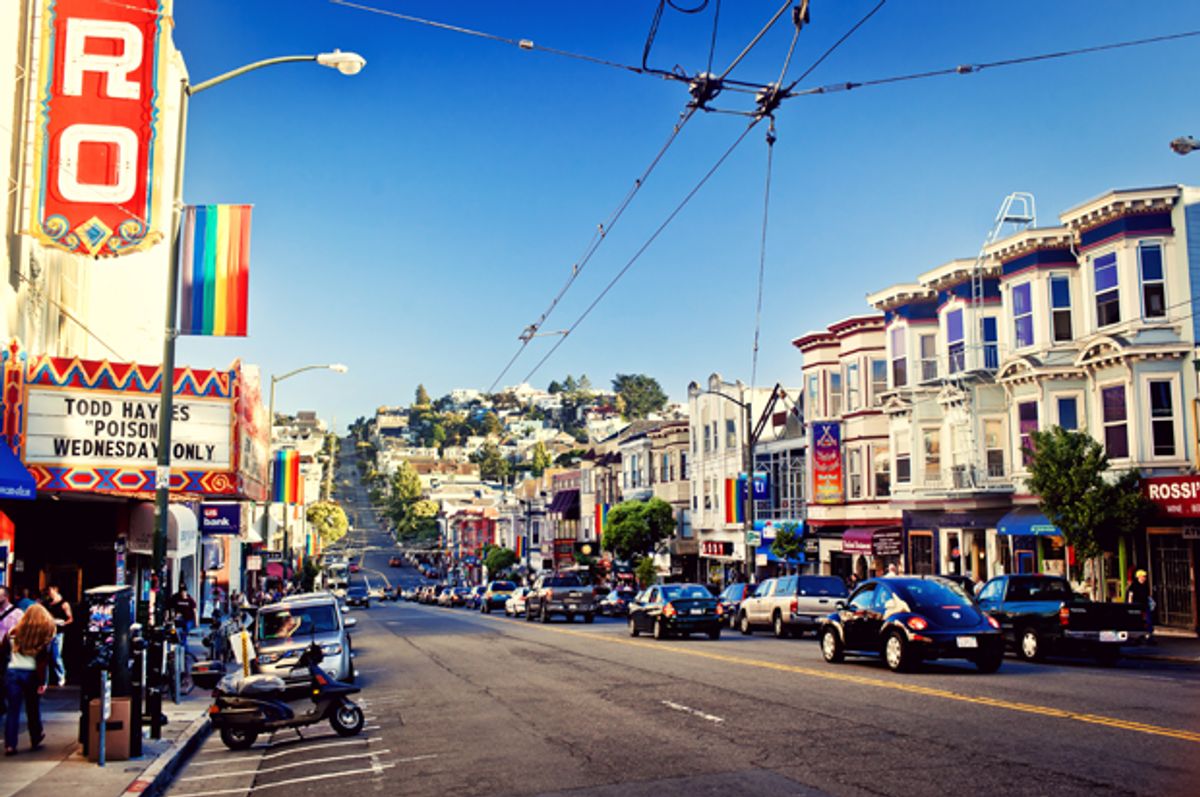 The Castro district of San Francisco (Andrey Bayda via Shutterstock)
--

Look out, gays and lesbians – the straight people are coming for your real estate. In "There Goes the Gayborhood," a new book for the Princeton Press, author and University of British Columbia associate professor of sociology Amin Ghaziani explores whether venerable "gayborhoods" like San Francisco's Castro and New York City's West Village are disappearing in "a new post-gay era." As demographics shift, is it a sign of acceptance of a community – or the dilution of it? Is it possible, as the New York Times once so damningly put it, that "gay neighborhoods face the prospect of becoming passe"?

For his research, Ghaziani tracked "census data, opinion polls, hundreds of newspaper reports from across the United States," with a particular focus on Chicago's Boystown, to paint a new portrait of the places that were just a few decades ago considered "gay ghettos." The results have been intriguing. As Money notes, Ghaziani found that between 2000 and 2012, the number of gay households increased in every neighborhood of Seattle – with the exception of Capitol Hill, its most traditionally gay neighborhood. There, the number of same-sex households plummeted by 25 percent.

What's left, as Ghaziani tells Money, is a shift that affects urban dwellers of all orientations. He notes, "It’s impossible to discuss gay neighborhoods without considering economic factors like rent and housing prices" -- and data from Trulia bears out that among the most expensive neighborhoods in the U.S. are, persistently, the ones with the same-sex couples.

Urban environments are constantly in flux; that's the nature of cities. Groups that in other parts of town might be considerably less welcome have always converged together; and that's how cultures maintain a cohesion in what might otherwise be a hostile environment. And then they leave, either pushed out because of gentrification or evolving out because of their own prosperity. What was once an old Jewish neighborhood is now a trust fund kid enclave; the Polish section of town turns over to stroller-pushing new parents and their spawn.

Writing in Gay City News in June, Ghaziani observed that the shifting population "is because LGBT people, in greater numbers than ever before, are living their lives outside the boundaries of just one neighborhood in the city," a truth that is in almost all respects a sign of progress. Speaking to the Seattle Times recently, Roddy Lindquist recalled moving to Capitol Hill with his boyfriend 20 years ago because "I wanted to be able to walk down the street holding my boyfriend’s hand. Capitol Hill was the only place you could do that without getting harassed." Couples have that simple pleasure in far more neighborhoods now – they don't have to feel confined to a radius of a few blocks.

But on the flip side, plenty of gay neighborhoods and their community leaders are fighting to assure they don't entirely lose their identity either. There's a pride of place and a deeply rooted history to be preserved as well, even as communities evolve. Speaking in ChicagoPride.com Tuesday, Alderman Tom Tunney said, "This year Boystown was voted 'The World's Best Gay Neighborhood' by Out Traveler Magazine, and has continued to solidify its reputation as a world class LGBT entertainment area." The challenge, for any group, is retaining an identity while living in the melting pot of urban life. And for the nation's most famous gayborhoods, reconciling a storied past with a suddenly straighter present.