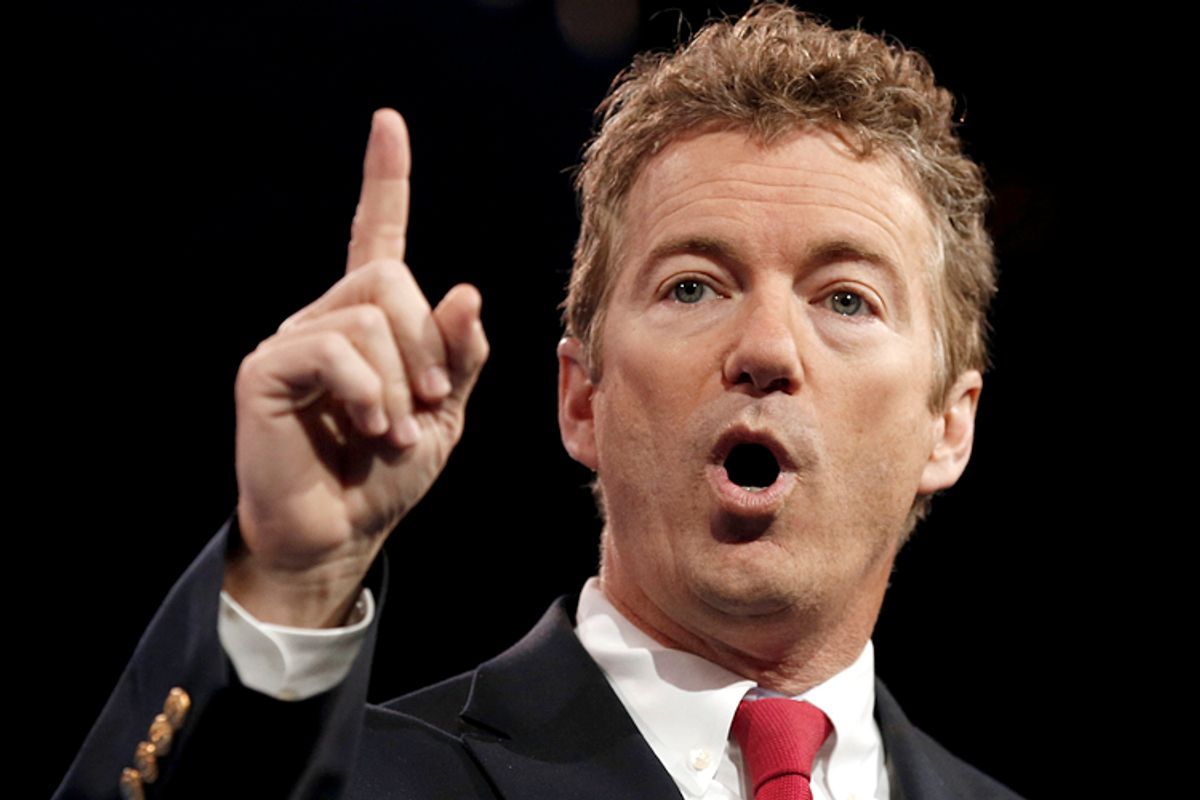 Way back in January 2013, Sen. Rand Paul made some headlines for himself by getting into a confrontational exchange with then-Secretary of State Hillary Clinton over Benghazi. “Had I been president and found you did not read the cables from Benghazi and from Ambassador Stevens,” Paul said to Clinton during a hearing of the Senate Foreign Relations Committee, “I would have relieved you of your post. I think it's inexcusable.” It was a great moment for political writers: two presumed 2106 presidential candidates squaring off over a hot-button issue, with one of them actually putting himself in the role of president.

It was also a big moment for Rand Paul, as he realized that combining “Hillary Clinton” and “Benghazi” and “president” in the same sentence was a great way to draw press attention to himself. In May 2013, Paul wrote in his weekly column for the Washington Times (this was before the plagiarism scandal forced him to move to Breitbart News) that Hillary’s role in the Benghazi controversy “suggests that at the very least, Mrs. Clinton should never hold high office again.” At a speech in Iowa, Paul said Clinton demonstrated a “dereliction of duty and should preclude her from holding higher office.”

Once again, the headlines came raining down:

Rand Paul: Hillary Clinton does not deserve higher office due to Benghazi

Rand Paul Fires At Hillary Clinton: Benghazi Should ‘Preclude Her From Higher Office’

Since then, Rand Paul has repeated some variation of this remark during speeches and televised appearances. And whenever he says it, a slew of media outlets rush to give it the screaming headline treatment, even though he’s been saying the exact same thing over and over for well over a year now.

Let’s run down a few instances of this phenomenon.

Rand Paul: Hillary's Handling of Benghazi Should Preclude Her From Higher Office

Paul: Clinton’s Handling of the Benghazi Attack Should Preclude Her From Higher Office

Paul: Clinton Not Fit for High Office Over Benghazi

Paul: Clinton Precluded  From Ever Being  President

Rand Paul: Benghazi Has 'Precluded' Hillary From Being President

Rand Paul: Hillary’s Benghazi Incompetence Has Precluded Her From Ever Being President

Paul: Clinton not fit to be president

That's a lot of headlines for a talking point that, at this point, has been floating around for well over a year almost completely unchanged.