The ethics of curing Ebola 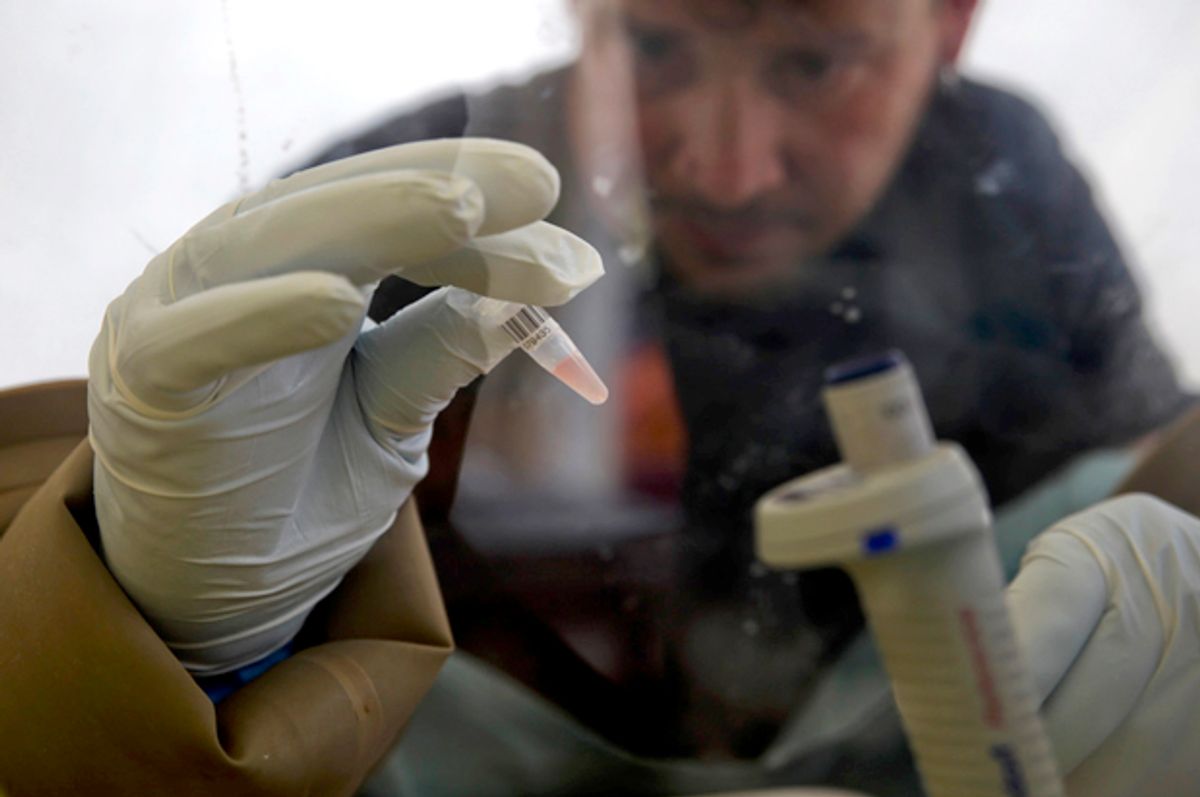 A scientist separates blood cells from plasma cells to isolate any Ebola RNA in order to test for the virus. (Reuters/Misha Hussain)
--

Amid all the screaming, panic-mongering headlines about Ebola, there are real issues that affect thousands of lives around the world. Take, for example, the intense debate arising over how to treat it – and what happened when two infected Americans were given an experimental new protocol.

This week, the New York Times reports that aid workers Kent Brantly and Nancy Writebol, who are currently in isolation in Emory hospital, are apparently responding well to ZMapp, the so-called secret serum that could hold the key to treating and even curing Ebola. The drug, made by Mapp Biopharmaceutical, uses passive immunotherapy – supplying antibodies directly to the patient to stimulate the immune system to attack the virus. So far, it has shown highly promising results in animal studies. And with a death toll in West Africa climbing toward 1,000 -- and even more individuals infected -- the international community is now asking if the drug can be made available there – while grappling with whether it should be. This week health specialists including Peter Piot, who co-discovered the virus in 1976, issued a joint statement that "Experimental treatments shouldn't be rolled out generally without prior safety testing, but in the face of the critical challenge in West Africa, the WHO and Western medical agencies should be helping countries weigh the risks and benefits of limited deployment of the best (drug and vaccine) candidates to those in the greatest need, while continuously monitoring safety and efficacy … These dire circumstances call for a more robust international response … African governments should be allowed to make informed decisions about whether or not to use these products, for example to protect and treat healthcare workers who run especially high risks of infection." They added their belief that if Ebola was a threat in the West, the health system "would begin discussions with companies and labs developing these products and then make rapid decisions about which of them might be appropriate for compassionate use."

But the process of bringing a treatment to the public is an often lengthy and complex one, even when dealing with simply trying to attain approval within the U.S. Doing it on an international scale is far more complicated, a race that in this case is pitting scientific advancement and drug production against a deadly outbreak. ZMapp has not been approved by the FDA, nor even previously tried in human clinical trial. And as Mapp itself explains, "As such, very little of the drug is currently available." The ethical issues surrounding ZMapp are further complicated by the fact that the serum is derived from tobacco. Reynolds American owns the factory where the drug is made. Saving lives is urgent business. Research, meanwhile, is painstakingly slow. On Wednesday, President Obama stated, "We've got to let the science guide us and I don't think all the information is in on whether this drug is helpful."

I have an intimate appreciation for many of these issues myself. Three years ago, when I was facing metastatic melanoma, I entered the first cohort of a Phase 1 immunotherapy clinical trial that would combine a very recently FDA approved monoclonal called Ipilimumab with a new monoclonal anti PD1 drug. It was the first time it had been tried on humans. I got lucky – two years later my trial's results were appearing in the New England Journal of Medicine, and being hailed as a "remarkable" development by the American Society of Clinical Oncology. In 2013, cancer immunotherapy was awarded the designation of scientific breakthrough of the year.

So yes, I believe strongly in the power of immunotherapy, even while acknowledging the vast difference between a contained disease like cancer and an outbreak that can swiftly affect vast numbers of people. I believe in everything miraculous that is possible when patients have access to promising therapies, even ones that have not yet been tried in humans. I believe in compassionate access for patients willing to take the very serious risks, potentially fatal ones, these treatments carry with them. And I strongly hope that the international response to the crisis in West Africa will lead to the accelerated development and distribution of treatment. Yet I also know that the process must be conducted with rigor and integrity and that it won't happen overnight. Wherever there is money to be made, government regulation and human life on the line, you are going to be entering very complex ethical territory, and that must be acknowledged and assessed in a manner that puts human safety first. Who wouldn't want to be the people who helped wipe out Ebola in Africa? But who would want to go down in history as being responsible for treating an entire population of suffering individuals as a failed medical experiment?

In an Op-Ed in the Washington Post this week, Susan M. Grant, the head nurse at Emory, wrote, "Ebola won’t become a threat to the general public from their presence in our facility, but the insight we gain by caring for them will prepare us to better treat emergent diseases that may confront the United States in the future." It reminds me of what a researcher once told me: "There's a difference between treating a patient and curing a disease." In Georgia right now, two patients are being treated. And even with all the hope and momentum in the world, that's not the same as curing a disease.