Back in Iraq: Obama OKs airstrikes on ISIS militants

U.S. fighters have carried out an attack on artillery used by militants to shell Kurdish forces 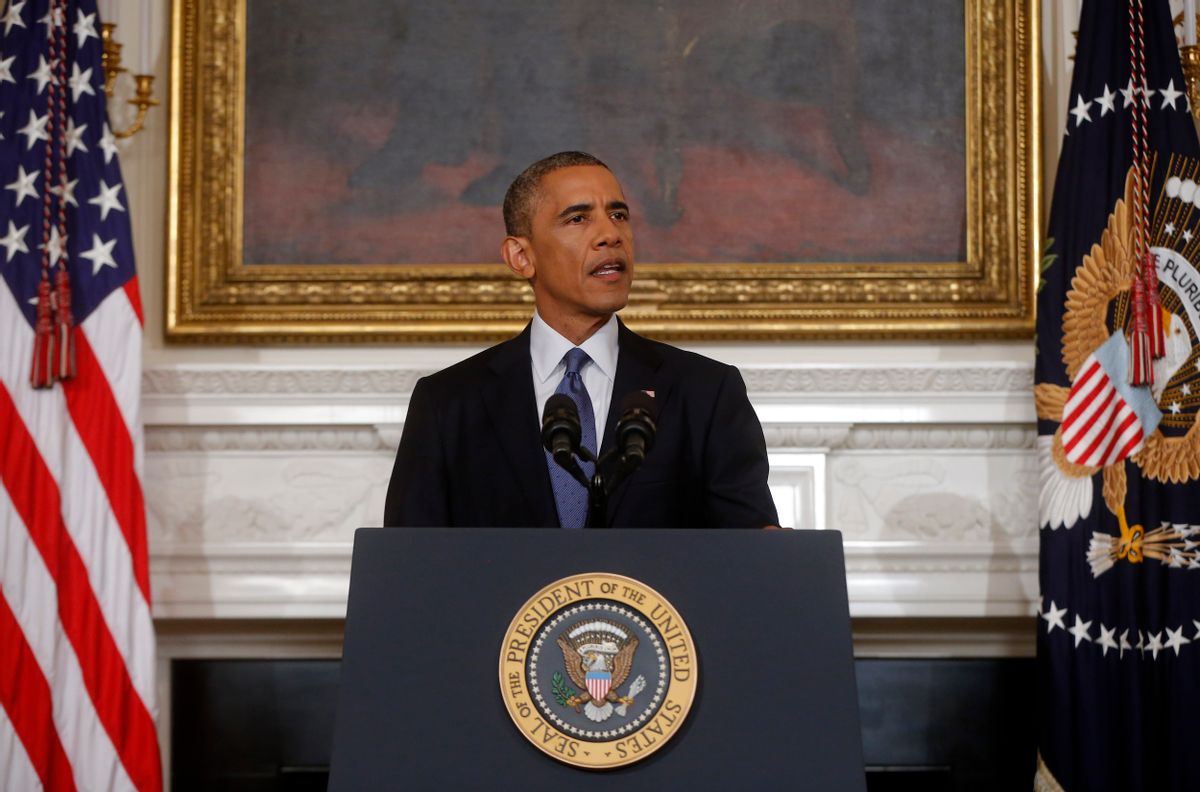 WASHINGTON (AP) — U.S. fighters dropped bombs on Islamic militants in Iraq Friday, the Pentagon said, carrying out President Barack Obama's promise of military force to counter the advancing militants and confront the threat they pose to Iraqi civilians and Americans still stationed there.

Pentagon press secretary Rear Adm. John Kirby said that two F/A-18 jets dropped 500-pound bombs on a piece of artillery and the truck towing it. Kirby said the fighters had taken off from the aircraft carrier USS George HW Bush in the Persian Gulf to conduct the mission. He said it wasn't clear how many militants might have been killed in the strike.

The Pentagon said the militants were using the artillery to shell Kurdish forces defending Irbil.

For the United States, it was a re-engagement in the long sectarian war from which American combat forces had been withdrawn — on President Barack Obama's orders — in late 2011.

In a televised speech Thursday night, Obama threatened to renew U.S. military involvement. At the same time, he announced that U.S. military planes already had carried out airdrops of food and water, at the request of the Iraqi government, to tens of thousands of Iraqi religious minorities atop a mountain surrounded by militants and desperately in need of supplies.

Speaking to reporters while traveling in India Friday, Defense Secretary Chuck Hagel said the U.S. military has sufficient intelligence resources and assets in place to launch strikes by both manned and unmanned aircraft in the region.

Asked if the Islamic State group could successfully hide among civilians to evade strikes, Hagel said if the Islamic State moves against Irbil, Baghdad or the refugees trapped on a mountain, "it's pretty clear who they are, and they would be pretty identifiable where our airstrikes could be effective."

The Yazidis, who follow an ancient religion with ties to Zoroastrianism, fled their homes after the Islamic State group issued an ultimatum to convert to Islam, pay a religious fine, flee their homes or face death.

"Earlier this week, one Iraqi in the area cried to the world, 'There is no one coming to help.' Well, today, America is coming to help," Obama said. "We're also consulting with other countries — and the United Nations — who have called for action to address this humanitarian crisis."

The announcement reflected the deepest American engagement in Iraq since U.S. troops left.

Obama, who made his remarks in a steady and somber tone, has staked much of his legacy as president on ending what he once called the "dumb war" in Iraq.

Mindful of the public's aversion to another lengthy war, Obama acknowledged that the prospect of a new round of U.S. military action would be a cause for concern among many Americans. He vowed anew not to put American combat troops back on the ground in Iraq and said there was no U.S. military solution to the crisis.

"As commander in chief, I will not allow the United States to be dragged into fighting another war in Iraq," Obama said.

Even so, he outlined a rationale for airstrikes in the event the Islamic State militants advanced on American troops in Irbil and the U.S. consulate there in the Kurdish region of Iraq. The troops were sent to Iraq earlier this year as part of the White House response to the extremist group's swift movement across the border with Syria and into Iraq.

"When the lives of American citizens are at risk, we will take action," Obama said. "That's my responsibility as commander in chief."

He said he had also authorized the use of targeted military strikes if necessary to help the Iraqi security forces protect civilians.

The Pentagon said the airdrops were performed by one C-17 and two C-130 cargo aircraft that together delivered a total of 72 bundles of food and water. They were escorted by two F/A-18 fighters from an undisclosed air base in the region.

The planes delivered 5,300 gallons of fresh drinking water and 8,000 pre-packaged meals and were over the drop area for less than 15 minutes at a low altitude.

The president cast the mission to assist the Yazidis as part of the American mandate to assist around the world when the U.S. has the unique capabilities to help avert a massacre.

In those cases, Obama said, "we can act carefully and responsibly to prevent a potential act of genocide."

Officials said the U.S. was prepared to undertake additional humanitarian airdrops if necessary, though they did not say how quickly those missions could occur.

Administration officials had said earlier they believed unilateral U.S. strikes would be consistent with international law, in part because the Iraqi government has asked for Washington to take military action. They also said Obama had the constitutional authority to act on his own in order to protect American citizens.

Obama had similarly authorized strikes in Syria last summer after chemical weapons were deployed, but those attacks were never carried out, in part because of domestic political concerns and also because an international agreement to strip Syria of its stockpiles of the deadly gases.

The president has also faced persistent calls to take military action in Syria on humanitarian grounds, given that more than 170,000 people have been killed there.

Critics, including some Republicans in Congress, have argued that Obama's cautious approach to Syria has allowed the Islamic State group to flourish there, growing strong enough to move across the border with Iraq and make swift gains.

"This should include the provision of military and other assistance to our Kurdish, Iraqi and Syrian partners" who are fighting the militants, airstrikes against the militants' leaders and forces and support for Sunni Iraqis who seek to resist the extremists, they said in a statement.

In light of the militants' advances, Obama dispatched about 800 U.S. forces to Iraq earlier this year, with those troops largely split between joint operation centers in Baghdad and Irbil.

More than half are providing security for the embassy and U.S. personnel. American service members also are involved in improving U.S. intelligence, providing security cooperation and conducting assessments of Iraqi capabilities.