Something very strange is happening in Miami

Florida's biggest city is undergoing a real-estate boom stemming from an unexpected source. But is it a bubble? 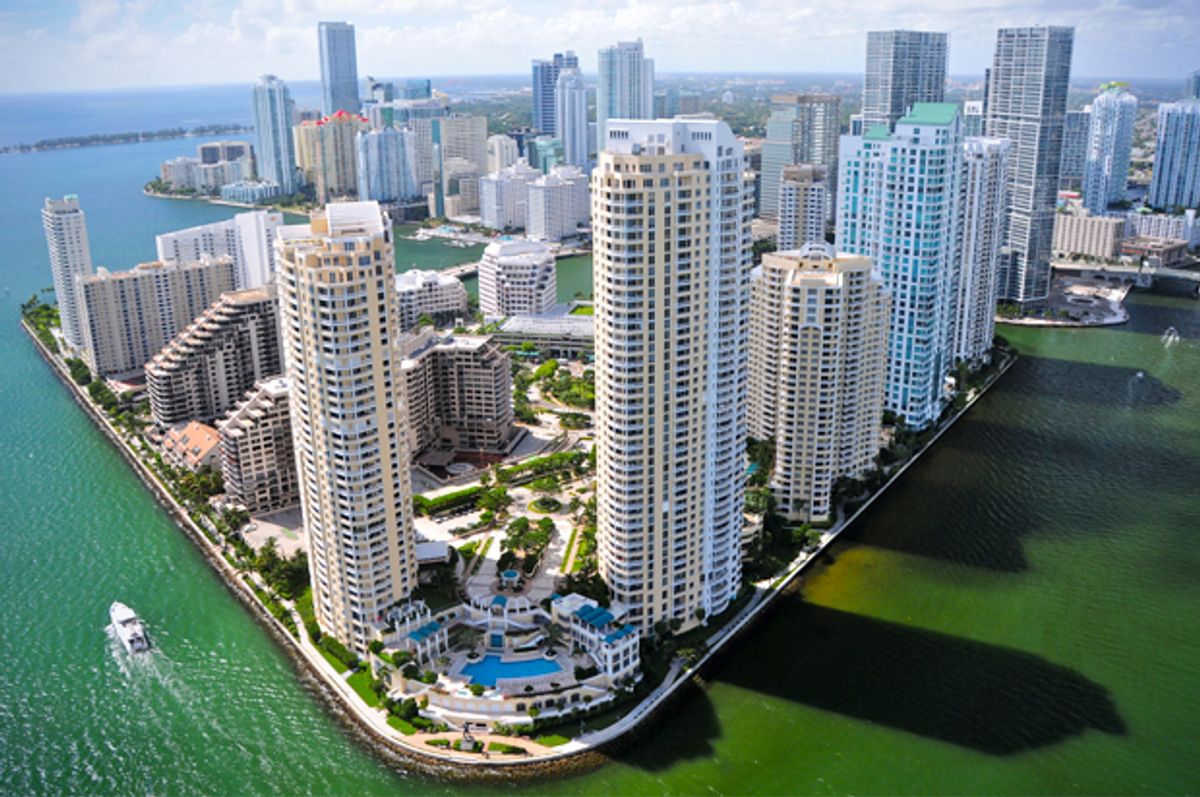 At the core of a global city, like London or New York, a local might look askance at the skyward hulls of new buildings, knowing that these residential projects, with striking designs by prize-winning architects, do not fulfill traditional notions of housing.

These apartments aren’t places to live, even a few months out of the year, or to rent. They are simply unusually shaped deposit boxes where several million dollars (or pesos, or rubles) can be left in security and secrecy. Economists and elected officials hold that the “safe haven effect” can secure a city’s financial future; critics say it contributes to the irreversible erosion of a city’s character and drives up the cost of housing. Either way, in an era of worldwide turmoil, the phenomenon is on the rise.

The mind-boggling home prices of global finance capitals have so far hogged the headlines. But to really see the power that foreign direct investment can exert on a city’s skyline, you need to go to Miami.

Over the past quarter-century, the Miami skyline has grown at a cornfield pace, fueled largely, realtors say, by buyers from South America. This trend is more natural here than in cities like Vancouver, where mainland Chinese are big condo buyers, or Paris, where Americans, among others, trade chic pied-à-terres. After all, most Miami residents speak Spanish at home, and the metro area has the highest share of immigrant business ownership in the country, at 45 percent. This is why the city is sometimes called the "Capital of Latin America."

Whether or not Miami deserves that moniker, it certainly attracts another kind of capital from Latin America.

A study released last month by the Miami Downtown Development Authority found that 90 percent of demand for new condos in Brickell, Downtown and Edgewater — a 4.5 mile swath of waterfront neighborhoods across the bay from Miami Beach — is from foreign buyers. More than six in 10 pre-sale buyers come from Latin America.

Most remarkably, for a major American downtown: Only one in 10 new apartments is purchased as a primary residence.

It’s hard to think of an appropriate parallel to another world city, let alone one in the United States. The area in question is not small: Imagine Manhattan’s West Side from 110th Street to 23rd Street, with 4,500 units under construction. (For comparison’s sake, Manhattan in toto, with a population four times that of Miami, authorized barely 5,000 new units in 2013.)

Miami has succeeded, in other words, in doing what Rust Belt towns like Detroit and Toledo are dreaming of: regenerating downtown through foreign investment. And this with an obvious threat to property values -- in the form of sea-level rise and storm surges -- looming on the horizon.

What distinguishes the current boom from the more gradual Latin American settlement of Miami, which has been underway for decades, is the amount of cash involved. “What’s changed is the deposit structure,” says Barbara Salk, a principal at the firm Sakor Development. “We’ve got very vested people buying into the real estate here.”

In response, developers have begun to adopt a model of real estate finance more commonly found in credit-tight South America, in which a buyer pays half the cost of a unit before the building is even finished. This favors developers, who need less equity to start a project, and gives confidence to lenders, who feel that buyers are committed.

The model is also well-suited to Miami’s real estate clientele, many of whom are looking to move cash reserves from South America’s teetering currencies into American real estate. Only a quarter of Miami condo buyers take out mortgages, versus 70 percent nationwide.

As Ken Silverstein has shown in the Nation, this practice is conducive to corruption. "The real estate industry is more lightly regulated than financial institutions,” Silverstein writes,

Banks are required to file a Suspicious Activities Report (SAR) with the Treasury Department if they suspect a client is depositing or transferring corrupt money. Real estate agents and title insurers are exempt from that requirement—as are businesses that primarily sell luxury goods such as jewelry, yachts and private planes—which makes property an especially attractive vehicle to money launderers. Furthermore, bank tellers don’t receive a commission on the deposits they accept, so they are more likely to ask questions of a dubious customer than a real estate agent, who stands to make a huge commission on a multimillion-dollar luxury condo deal.

But Miami condos aren’t priced like their equivalents in New York City and London. The average price of a unit in a current selling project is $662,439. It’s not pocket change; but it’s also less than half the average condo price in Manhattan. Median sale prices in San Francisco recently topped $1 million.

Though funded by transfers from foreign bank accounts and seldom assumed as a primary residence, Miami’s new apartments aren’t anything to gawk at. The average Miami condo is closer in value to a healthy retirement savings account than a drug-money fortune.

This may be related to another difference between the market in Miami and its global-city big sisters. According to a recent New York magazine article, “30 percent of all apartments in the quadrant from 49th to 70th Streets between Fifth and Park are vacant at least ten months a year.” London, too, suffers from ghost districts dominated by part-time (or no-time) owners.

But the crop of downtown Miami condos from the last cycle, according to the Downtown Development Authority, are over 95-percent occupied, whether by part-time owners or, more likely, by tenants. Miami neighborhoods may lack the organic texture of 57th Street or Mayfair, but their buildings are not lacking for people.

Is it crazy to add 23,000 units – the crop of the current cycle – to a market with scant local demand, in a metro area with the highest foreclosure rate in the United States? Is downtown Miami a bubble?

“Greater Downtown Miami is always in a bubble,” the report finds, “because 90 percent of the demand is external, and hence not tied to economic fundamentals.”

Whereas a traditional housing market draws its strength from job growth and new residents, “safe haven” housing markets are fueled by global instability. And there’s certainly plenty of that to go around.