He wasn't a natural fit for movies, and his stardom was a trap. But his lightning comic talent was like no one else 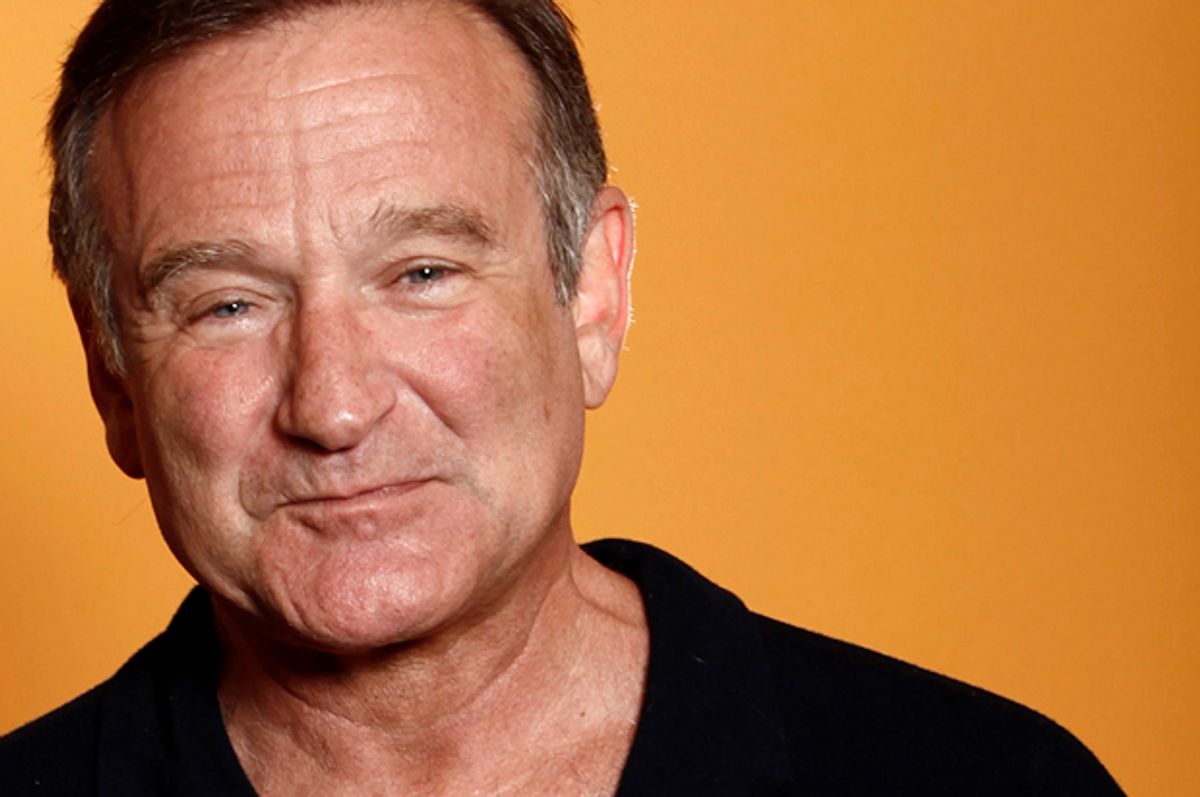 If Robin Williams’ career as an actor and comedian was in many ways perplexing and difficult to summarize, the man himself was still more so. I didn’t know Williams personally, but like many other people who spent time in San Francisco nightclubs in the ‘80s and early ‘90s, I saw him in public on numerous occasions. He was a voracious music fan and a fixture in the city’s punk, new wave and post-punk music scene during those years, often seen standing by himself at the back of the crowd in all sorts of divey establishments. I can remember lurking by the door for a Monday-night show in the legendary I-Beam on Haight Street, sometime around 1986 – my memory claims the headline band was the Jesus and Mary Chain, but I won’t swear to it – and gradually becoming aware that the older guy standing next to me was Mork from Ork. It seemed almost as implausible then as it does now.

Clubgoers less diffident than I reported that Williams was approachable and friendly enough in those environments, but I never saw him talk to anyone. You should never rely too much on what you know, or think you know, about an actor’s personality in understanding his or her work. (Too many invisible factors are involved, and too much randomness, in terms of what projects actually come to fruition, and in what order.) But as Williams’ career tacked from one extreme to another – from the bathos and schmaltz of “Dead Poets Society” and “Patch Adams” to mainstream farce like “Mrs. Doubtfire” to his dazzling improvised cameos in “Aladdin” and “The Adventures of Baron Munchausen” and many other films – I couldn’t help remembering him as the guy in the back of the nightclub, who had willingly thrust himself out there in public, in an unfamiliar and unpredictable situation, but was all alone.

It’s a cliché to say that Williams’ abundant talent was too eccentric for the movies, and that for all his success the film medium could never contain or capture the things that made him so supercharged as an improv comic or a late-night talk-show guest. That doesn’t make it untrue. Most of the time great actors leave us with a well-defined legacy of classic screen roles, but Williams' case is highly unusual. I know I'm not alone in believing he was at his best in strange and seemingly marginal entries on his long cinematic résumé: The aforementioned "Munchausen" and "Aladdin," along with "Popeye" from the first chapter of his career and "One Hour Photo" and "World's Greatest Dad" nearer to the end.

While the news of Williams’ death by apparent suicide comes as a dreadful shock, the jagged arc of his career felt like one overcorrection after another, as if he were chasing after something he could never find, or escaping something he couldn’t outrun. As with the late Philip Seymour Hoffman, Williams’ struggles with drug abuse and alcoholism – and his recent lapses after many years of sobriety – were no secret. But Hoffman always knew exactly what he wanted to do as an actor and pursued his artistic goals with single-minded purpose, however messed up his private life may have been. It's easy to list a litany of his greatest screen roles, from "Boogie Nights" to "Talented Mr. Ripley" to "Capote" and beyond.

Williams, who was at least as talented an actor (he was trained by John Houseman at the Juilliard School in the mid-‘70s, alongside his good friend Christopher Reeve -- at least until Houseman told him he was wasting his time in acting school), was quite another story. For good or ill, you never had any idea what he was going to do next. While the revelation that he suffered from a depressive illness cannot be treated as a one-size-fits-all explanation, it sheds light on certain aspects of his acting life as well as the terrible circumstances of his death. No one who has had depression, or been close to someone with depression, will need to ask why a person who had achieved fame, wealth and immense professional success would take his own life. Williams’ penchant for earnest, mawkish, feel-good movies that seemed strikingly at odds with his anarchic comic persona also makes more sense viewed through that prism; so too, perhaps, does his recent turn toward darker roles in small-audience indie films.

One could construct an argument that by the time I stood next to Williams in that nightclub in 1986, he had already given his most original and most complete dramatic performance in a movie. Or even his top two. The one I principally mean, of course, is “The World According to Garp,” from 1982 (a middling adaptation of John Irving’s colorful picaresque, in which Williams is terrific), but two years before that he’d had his first starring role, as the spinach-chuggin’ sailor-man in Robert Altman’s criminally underrated “Popeye,” which is overdue for cultish rediscovery. I suppose this is a ridiculous thing to say, but Williams got Popeye, making him foolish, sublime, tragic and moronic, all at the same time. But “Popeye” was a bomb and “Garp” only a modest success, and instead it was “Good Morning, Vietnam” in 1987, which allowed Williams to riff and improvise extensively within the context of a conventional comedy, that made him a star.

In all the most obvious ways, that was the beginning of a golden period in Hollywood for Williams, but it was also a trap that gradually tightened around him. He was nominated as best actor by the academy three times within five years – for “Good Morning, Vietnam,” “Dead Poets Society” and “The Fisher King” – an award he now will never win. He became an immensely bankable star after those films and the huge hits “Hook” and “Mrs. Doubtfire,” reportedly earning $15 million for “Jumanji” and $20 million for “Bicentennial Man.” If you just said, “$20 million for what?” you now understand everything that’s wrong with Hollywood, along with the nature of the gold-paved road to nowhere that was Robin Williams’ career as a mainstream movie star.

All the star vehicles Williams made between 1987 and 1999 were built on the “Good Morning, Vietnam” model, designed to bottle his manic comic energy by allowing him to improvise with little or no narrative inhibition, and then distilling him out the back end into a formulaic tale of redemption. This worked irresistibly in the idiotic but genial gender farce “Mrs. Doubtfire” (although I’m not claiming I want to see it again), but the creative strangulation became obvious pretty fast. The movies got progressively weaker after those three Oscar-nominated roles, and the commercial returns declined as well. It seems clear that Williams knew he had hit a creative dead end: In 1998 and 1999, he abruptly tried to pivot from comedy to drama with a succession of disappointments and flat-out disasters: “What Dreams May Come,” “Patch Adams,” “Bicentennial Man” and the truly abysmal Holocaust dramedy “Jakob the Liar.”

Whether the decision was entirely his or not, Williams’ career took a sharp left turn after that. With the solitary exception of Danny DeVito’s bizarre farce “Death to Smoochy” (and what an exception that is!), he didn’t play a leading role in a Hollywood movie for the next seven years – and he would never have a hit comedy again. His Oscar-winning supporting role of 1997, as Matt Damon’s tough-love shrink in “Good Will Hunting,” suggested that a third act as a dramatic character actor might lie ahead. There were certainly glimmers of that in Williams’ later career, like his subtle and subdued performance as an obsessive lab technician in Mark Romanek’s “One Hour Photo” -- for my money, his best pure acting since “Popeye” -- or the isolated high school teacher he played in “World’s Greatest Dad,” directed by his old San Francisco comedy pal Bobcat Goldthwait. (Is it too much dime-store psychology to note that both those characters are lonely and profoundly depressed?)

Williams’ acting over the last dozen years or so has seemed miscellaneous, and almost feverish. He took time off to deal with substance-abuse issues in the mid 2000s and to have heart surgery in 2009, but given all that he has been working incessantly. He has played two different United States presidents in wildly different contexts – Teddy Roosevelt in the “Night at the Museum” series and Dwight Eisenhower in “The Butler” – voiced an animated penguin and made a dystopian thriller nobody saw (“The Final Cut”). He tried to return to mainstream comedy without success, even playing a character based on Jon Stewart (in “Man of the Year”) without attracting Stewart’s fan base. He came back to network TV after more than 30 years with the CBS sitcom “The Crazy Ones,” which was not a hit.

I’m not postulating some clear connection between Williams’ erratic later career, his illness and the way he apparently ended his life. That’s not how depression works, and anyway, most actors would be thrilled to have 1 percent of Robin Williams’ talent, energy or success. I’m observing only that Williams gave the impression of working ferociously and unstoppably to capture something that couldn’t be captured, and that perhaps he himself could not identify. He made good movies, bad movies and indifferent movies, but the thing that made him one of the most beloved performers of our time, his inexhaustible life force and comic electricity, can be seen in them only in flashes and glimpses. It was like lightning called down from the sky – it was here for a moment and now it's gone.