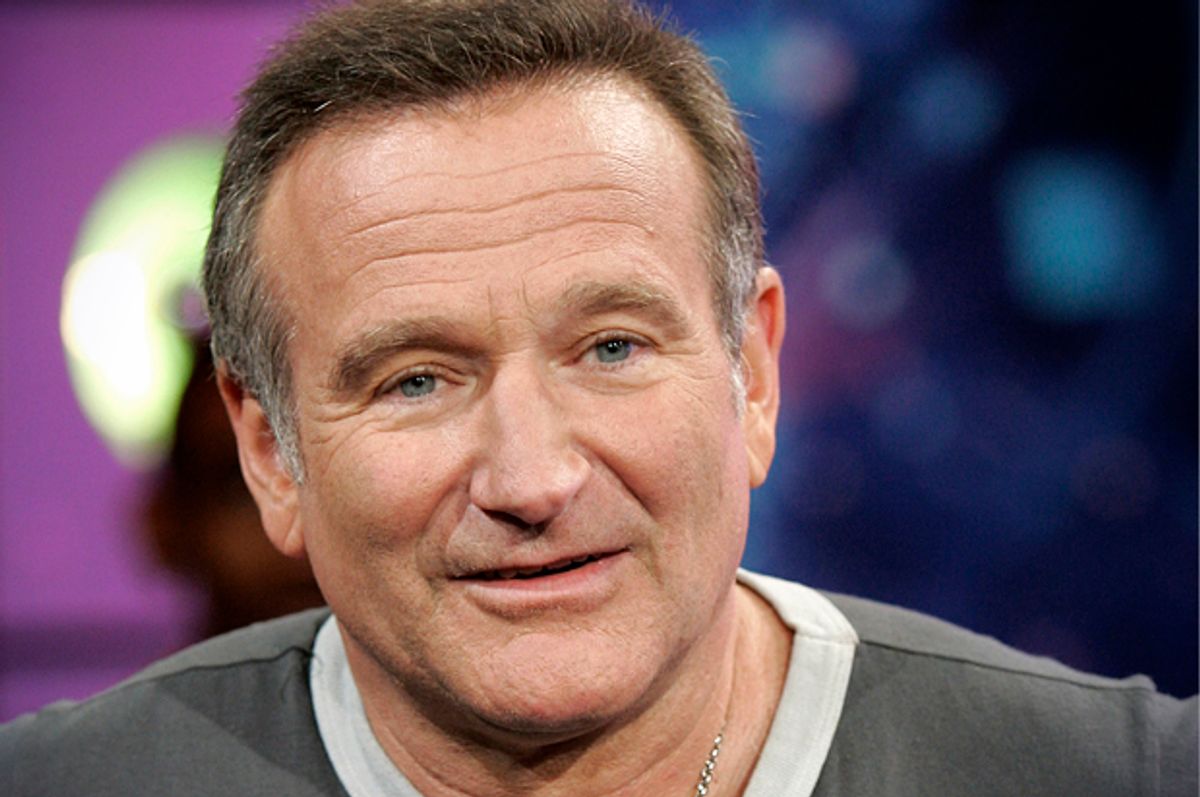 Remember when you were a kid and your glee club learned all those songs in German and Spanish and French, even though you didn't actually speak German and Spanish and French, so you just mustered through phonetically without any real comprehension of what you were singing about? Now imagine that instead of being a fourth grade student you're a news organization, and that instead of a foreign language, it's basic common sense. Then you'll have a sense of some of what happened in the hours immediately following the announcement Monday that Robin Williams was dead.

As the media spun itself into a frenzy Monday evening, looking for fresh angles on a developing story, it didn't take long for ABC News to come in first in the cluelessness race, with a bright red banner on its site with an invitation to "Watch Live: Aerials of Robin Williams' Home." That message appeared right above its own news report noting, right there in the fifth sentence, that the actor's representative Mara Buxbaum had stated, "The family respectfully asks for their privacy as they grieve during this very difficult time." In her own statement Monday, Williams' wife, Susan Schneider, echoed that sentiment, saying, "On behalf of Robin’s family, we are asking for privacy during our time of profound grief."

As numerous social media watchers were quick to point out, nothing says respect for a family's privacy like a helicopter over his house. "We do not need to watch live aerial footage of Robin Williams' home and ABC News should not be doing/promoting it," said one tweeter, while artist Mike Montiero was more blunt, posting a screenshot of the ABC page with the message, "Hey @ABC, go f--k yourselves." Without comment, ABC quietly removed the banner soon after.

But as the hours ticked by Monday, other news outlets couldn't resist sniffing around Williams' home as well. The Daily Mail, unshockingly, quickly swooped in with a Getty Images shot of a Marin County sheriff's car outside of the actor's Tiburon home. And along with a Peter DaSilva/EPA photo of a girl leaving flowers outside of Williams' home – a photo in which the house number is clearly visible -- Lee Romney of the L.A. Times filed a story describing how "The single-story home with a Spanish tile roof backs onto stunning views of San Francisco Bay. On Monday, a Land Rover and Lexus SUV sat parked in front of the three-car garage." Romney interviewed neighbors on the street, and described the scene as "news crews began to crowd the quiet street not far from the Tiburon Yacht Club." The SF Gate, meanwhile, posted a slideshow that included five photographs outside of Williams' home, noting, "Dozens of neighbors and fans -- along with dozens more reporters and photographers -- stood hushed outside the large, Spanish-style home where authorities had found Williams' body hours earlier, after a call from family members." What part of "The family asks for their privacy as they grieve during this difficult time" don't people understand?

That fans and neighbors might have an impulse control problem and rush to leave flowers outside of the place where the actor's body was found is unfortunate but perhaps understandable. That reporters and photographers are now "crowding" around – even as they report on the family's specific wishes -- is pretty damn despicable. There is not an element of this story that requires a reporter or a photographer to be standing outside of the man's home right now. There is not an aspect of their presence that is helpful to the family or the investigators. Of course, it's not the news media's job to be helpful; it's its job to observe and communicate. There's no obligation to stay away from the man's doorstep, no enforceable imperative to honor the family's plea. It would just be a decent and human thing to do. But while we can't control what news outlets do, we as readers and watchers have a choice about our own participation in this particular circus, and how we fans want to behave toward the family of a person who gave so much for so long. Seems like an easy choice, to do what they asked and not click or watch the frenzy outside his house. To let them mourn in peace.

Update: On Tuesday morning, a representative from ABC News reached out to Salon to say the network had issued an apology. In a statement, ABC said, "When we realized there was no news value to the live stream, we took it down immediately. Our intention was not to be insensitive to his family, friends and fans, and for that we apologize." The ABC representative added to Salon, "The live steam was up for less than an hour, we realized almost immediately we needed to stop the live stream and we pulled it down as we saw the reaction from our audience on social media." So thank you, social media, for helping a major network's news division understand some basic journalistic ethics.