GOP's one sacred principle: A spending philosophy of lies and troop worship

Remember all the talk about no new laws that weren't paid for? We've just learned there's a huge, glaring exception 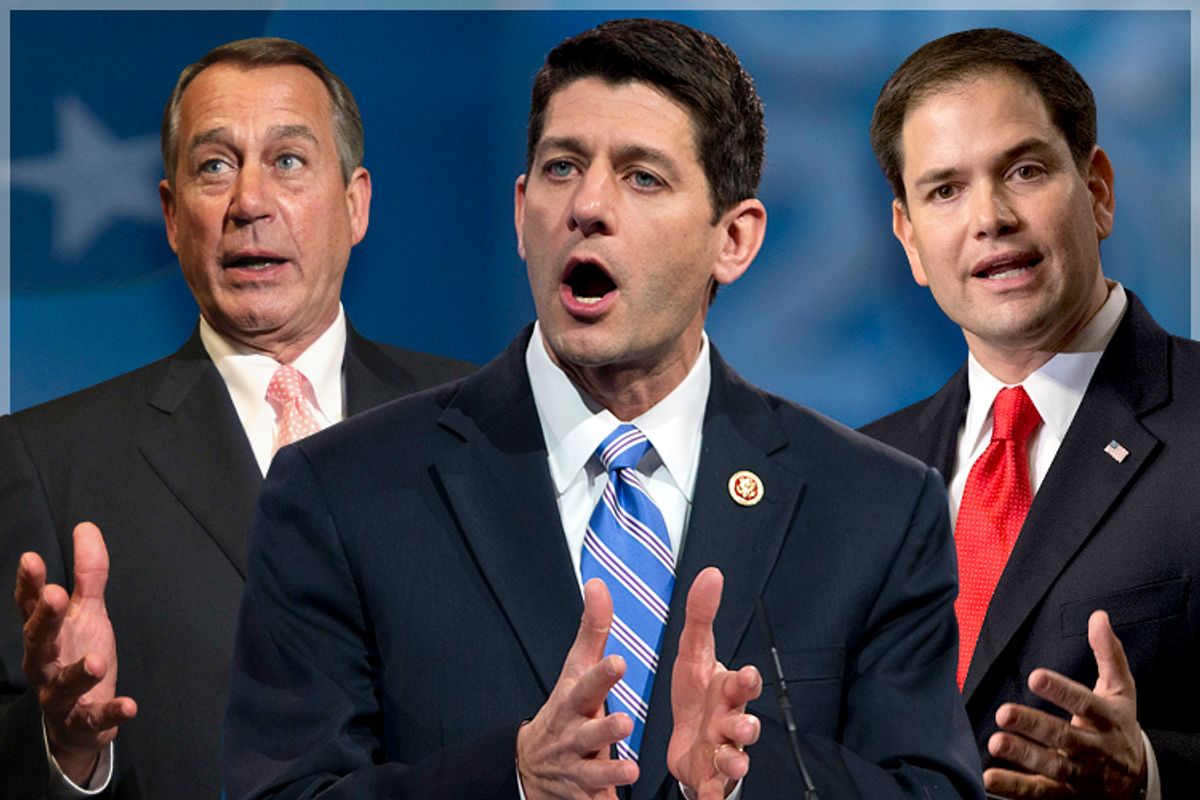 Something extraordinary happened in Congress before they took their month-long August break. No, not that they passed a bill, though that has become a rare feat these days. This Congress, so obsessed with the deficit that they imposed a spending cap on themselves, and vowed that no new legislation would ever pass without being paid for, did just that last Thursday. Moreover, the same Republican House that has taken several dozen votes to repeal Obamacare passed this deficit-spending bill to further fund the country’s only system of socialized medicine.

How did this happen? Because when you support the troops, federal spending is magic spending that doesn’t count.

The bill, signed by the president last Thursday, seeks to reform the Veterans Administration, though you can make a credible case that the new spending represents an attempt to undermine it. We’re only talking about an infinitesimal sliver of the federal budget, $10 billion in new spending spread out over a couple of years. But if the government allows itself to spend in reaction to an emergency without having to pay for it, suddenly a whole host of options come into play. It overturns so many false ideas that have perniciously made their way into the mainstream over the past several years, from the virtues of austerity to the inadequacies of economic stimulus. And it exposes how anything that has to do with the military gets a free pass, one that should be extended to all kinds of worthy policies.

Under the legislation passed by Congress, the $10 billion will go toward vouchers that enable any VA patient who experiences long wait times or lives more than 40 miles from the nearest VA facility to access private medical coverage.  Another $6.3 billion in the bill goes toward hiring more VA doctors, upgrading current VA health centers, and entering into leases with 27 major medical facilities across the country.

That $6.3 billion gets paid for internally with offsets from the VA budget. But Congress was taken by surprise, amazingly, at the cost of private medical care. The Congressional Budget Office scored the private coverage aspect of the initial bill as costing $35 billion between now and 2016. According to CBO, covering private care would cost $25 billion just in 2016, when the entire VA budget costs $44 billion annually.

Congressional negotiators got their hands around the cost by turning it into a pilot program, with a fixed limit to the spending. And it will be worth tracking to see how long it takes for that funding to dry up when routed through the inefficient and wasteful private healthcare system. In reality, only 0.6 percent of VA enrollees ever experienced wait times over 90 days; this was a political rather than a policy problem. And it’s worth noting that many veterans advocates would rather have more money put into the specialized VA system than into back-door privatization, especially if growing the private care benefit means eroding the VA.

But Congress still had the bigger problem of how to fund that $10 billion, with the clock ticking before the statutorily mandated August recess (that’s right, Congress is obligated by law to go on vacation after July 31). So in the end, they decided not to pay for it.

They would not be able to get away with that, politically, with virtually any other priority of the federal government. Spending for national parks, medical research through the National Institutes of Health, food stamps, housing vouchers, anything else you can name, would require an offset. The Budget Control Act attempts to prevent Congress from spending above a top-line number on the discretionary budget for the next several years. Sequestration, most of which remains in effect, cuts spending rigidly without allowances. Paygo legislation disallows spending without offsets; efforts like the VA bill require a special vote to waive that statute. Not even unemployment insurance for the large segment of long-term unemployed workers can get by without an offset, which is why it has yet to be renewed.

Most reasonable people would consider being unemployed for months on end an emergency. But Congress finds it hard to rouse itself even with respect to unquestioned emergencies. The same week that they were handing out $10 billion for private voucher coverage through the VA, Republicans in both houses of Congress rejected $650 million in spending for wildfires along the West Coast, even as more than a dozen continue to burn. They didn’t mind spending more than 15 times that on the VA without paying for it.

This kind of thing happens like clockwork every few months or so. Recall back in January, when the budget bill contained a loophole restoring military pension cuts while exempting the cost of that restoration from paygo requirements. In other words, then as now, military spending gets put in a separate category from everything else in the budget, freed from the strictures of budgetary politics.

The lesson here is that the only emergency spending that matters to Washington has to do with the troops. Bernie Sanders, the lead negotiator on the Senate side of the VA bill, said that “Funding for veterans' needs must be considered a cost of war and appropriated as emergency spending,” just like supplemental spending for Iraq and Afghanistan. That’s true, but why not extend that out? It’s not that I would hold soldiers to the same miserly standard as the rest of the budget, it’s that I would use the proper definition of the word “emergency” to describe all of our pressing national priorities, not just the ones that require guns and tanks.

It’s incredibly likely that the VA back-door privatization measure will become permanent in future years. Once Congress starts spending on they military, they find it exceedingly hard to stop. Politicians make the military and its members a priority. I wish they had the same concern for the rest of our 300 million citizens.