Why Lauren Bacall was one of Hollywood's greatest feminist icons 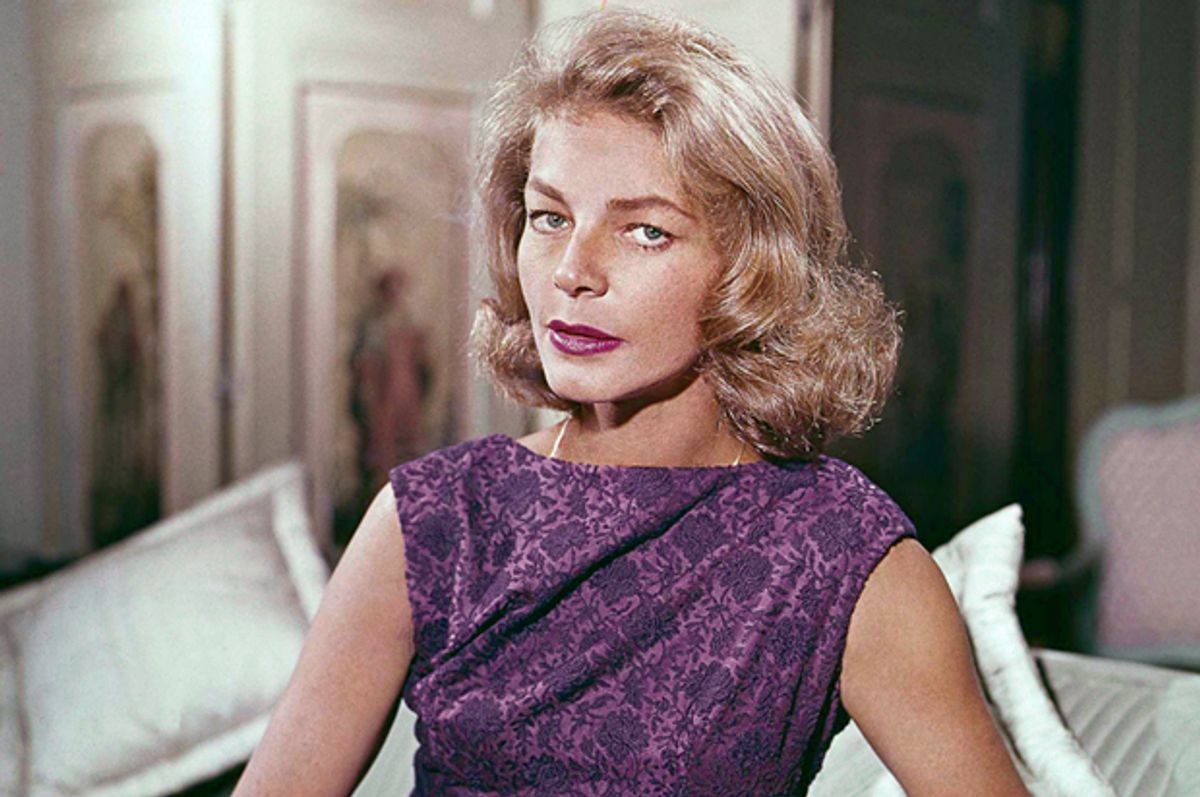 Simultaneously feminine and tomboyish, Lauren Bacall embodied an intense female ambiguity – an ambiguity about what it meant to be a woman -- that bubbled under the surface of 1940s Hollywood, and 1940s America. No doubt it seems like a stretch, in contemporary terms, to describe Bacall as a feminist icon. She first rose to fame as a teenage glamour girl attached to a famous actor 25 years her senior. So far as I know, she took no role in the women’s movement and made no public statements attaching herself to feminist causes. During her 12-year marriage to Humphrey Bogart, Bacall put their relationship ahead of her career (as women were uniformly expected to do), which no doubt cost her many starring roles and millions of dollars.

Nonetheless, by delivering a message in the coded language of movie stardom, Lauren Bacall unmistakably played a role in the feminist revolution. She was a star so long ago that her real significance – the combination of explosive ingredients she carried with her on-screen – is in danger of being totally invisible to contemporary viewers. I mean her classic period of stardom, of course; after long periods of relative inactivity, Bacall enjoyed an entire second career in her 60s, 70s and 80s, which may well be how most people know her today. Her only Oscar-nominated role, bizarrely enough, came as Barbra Streisand’s horrific mother in the 1996 rom-com “The Mirror Has Two Faces.” She got punched out in a 2006 episode of “The Sopranos,” acted in two Lars von Trier films (“Dogville” and “Manderlay”) and voiced an evil witch in the English-language version of Hayao Miyazaki’s “Howl’s Moving Castle.” But all those roles came in the peculiar capacity of living legend, a charismatic personage whose true meaning is lost to us. In the case of Lauren Bacall, who was born in Brooklyn in 1924 as Betty Joan Perske, the daughter of Jewish immigrants from Poland and Romania, that meaning lies half-buried in the cultural past.

Of course we can still see the obvious reasons why director Howard Hawks cast Bacall opposite Bogart in “To Have and Have Not,” the movie that made her an overnight sensation and remains her most enduring legacy. According to several sources, it was actually Hawks’ wife, Slim, who first noticed the 18-year-old then known as Betty Bacall on the cover of Harper’s Bazaar – and then lent her own nickname to Bacall’s character in the film. I’m inclined to believe that’s an important detail: Slim Hawks saw something in that unusual-looking teenager that went beyond the usual prurience or sexual objectification of the “male gaze” – although there’s no point denying all that stuff was there as well.

The thing is, even Bacall’s physical features and evident sex appeal send mixed signals: She is tall and long-legged, but also slouchy. If her ironic gaze and sculpted waves of hair suggest a woman of the world, they come along with hints of teenage awkwardness. (Bacall later said that her distinctive chin-down, eyes-up posture, which came to be known as The Look, was a way of concealing her nervousness.) You could call her striking or beautiful, but certainly not delicate and least of all “pretty.” She’s too broad-shouldered for a classic ingénue, and walks across the room with an androgynous swagger. If her character in “To Have and Have Not,” Slim Browning, is playing the role of seductress to Bogart’s Harry Morgan, we get the distinct impression that’s a conscious decision. Give her something else to wear and a different situation (one imagines) and she might be just as happy painting the fence or playing baseball.

I’m aware that in seeking to decode the semiotics of a long-ago movie star in this manner, I’m committing exactly the same sin that I claim Bacall’s persona resisted – treating an actual woman as an icon for male contemplation. But there’s really no way around that problem. Bacall’s specific accomplishment, as a screen actress, was to embrace the role of sex symbol without hesitation and also to begin the long process of subverting it to other purposes, the process the French Situationists would later call détournement. Of course there had been “bad girls” and sexually aggressive women in movies long before Bacall got there; one of the not-so-secret allures of B-grade American crime cinema was the scandalous suggestion that women actually liked sex, and sometimes actively pursued it. But if Slim Browning has autonomy, sexual agency and evident appetites, she isn’t a classic “bad girl” of the sort who generally winds up dead or in jail in movies of that period. She’s a complicated moral agent and the heroine of the story, who will redeem Bogart’s jaded protagonist and then run away with him, not necessarily toward a white picket fence and happily-ever-after.

Indeed, it’s only exaggerating a little to say that Bacall plays the leading man rather than the leading lady in “To Have and Have Not” – or to say that she and Bogart switch roles during the course of the story. Every single obituary written since Bacall died on Tuesday, at age 89, at her New York home will quote her most famous line of dialogue, and I wouldn’t want to disappoint you. It’s the one where Slim purrs to Harry (who has told her his name is Steve), “You know how to whistle, don’t you, Steve? You just put your lips together and blow.” But that legendary sexual come-on, framed such that the censors could not claim it was overtly sexual, arrives at the end of a carefully constructed scene that’s worth watching in its entirety. (A YouTube clip is embedded below.)

Taken as a whole, the scene is like a mini-seminar in 20th-century gender codes and their subtexts, and while it’s possible that not all the decisions Hawks made in this scene were entirely conscious, that’s not the same as saying they were accidental. Bacall is standing throughout the scene (except when Slim is on Harry’s lap), and Bogart mostly sitting. Her character, who has a masculine nickname, is in a position of power throughout. She offers him money, then initiates their first kiss and then their second, and ends with the obvious sexual invitation. All of this comes from a position of visual superiority – she is literally above him the whole time, and wearing a robe that shimmers with reflected light – and also moral and ethical superiority, since within the narrative of the film we know that she is pulling him toward the cause of the French Resistance.

These elements of subversion are balanced with elements of reassurance, to be sure: Their clothing is strongly gender-coded and while Bogart is fully dressed, Bacall’s robe suggests that she has recently been naked (or will be soon). Slim is the sexual aggressor, but she also sits on Harry’s lap, a posture that suggests eventual submission. The intense sexual energy of the scene is not just about the fact that the two people were strongly attracted to each other in real life, although no doubt that’s a significant factor. To use contemporary radical parlance, there’s something “queer” about the scene, which employs the most conventional forms of sex-and-gender relations and also twists them a little. One could phrase it more simply: Bogart and Bacall radiated such potent masculinity and femininity that they were comfortable playing against type a little, and confusing the role of the hunter and the hunted. It comes to the same thing either way: The chemistry between Bogart and Bacall in that movie captured the public imagination, and did so because it broke the stereotypical mold of screen romance.

I don’t mean to suggest that Lauren Bacall’s remarkable screen presence, or her vibe of ferocity and independence, were invented by Howard Hawks, although she said herself that her career would have been much different had she kept on working with him. He saw something that was already there, the resolution of a girl who had grown up amid the subway-riding strivers of immigrant Brooklyn, a girl who was not content to be another pretty face but, in the words of William Faulkner (who co-wrote the screenplay for “To Have and Have Not”), “had decided to prevail.”

Bacall remained a fine actress and a potent screen presence for the rest of her life, but her revolutionary moment was extremely brief. She made two more classics with Bogart, Hawks’ “The Big Sleep” and John Huston’s “Key Largo.” Both of those are first-rate Hollywood films, but her performances don’t pack the same wallop; extra scenes of risqué dialogue between Bogart and Bacall were edited into “The Big Sleep” before release, in an attempt to recapture something that had already escaped containment. But she had made history in her own unique fashion, helping to loosen the seal on the bottle that held the genie of female agency and autonomy and empowerment. Bacall may or may not have viewed herself as a feminist, but that doesn’t much matter: If you doubt her importance, talk to Madonna or Lady Gaga or Lena Dunham or Susie Bright. Those and so many more are her daughters.