"The Giver": A lukewarm dystopia that arrives years too late

Jeff Bridges is soulful, but this adaptation of Lois Lowry's novel is a pale imitation of the YA-mania she inspired 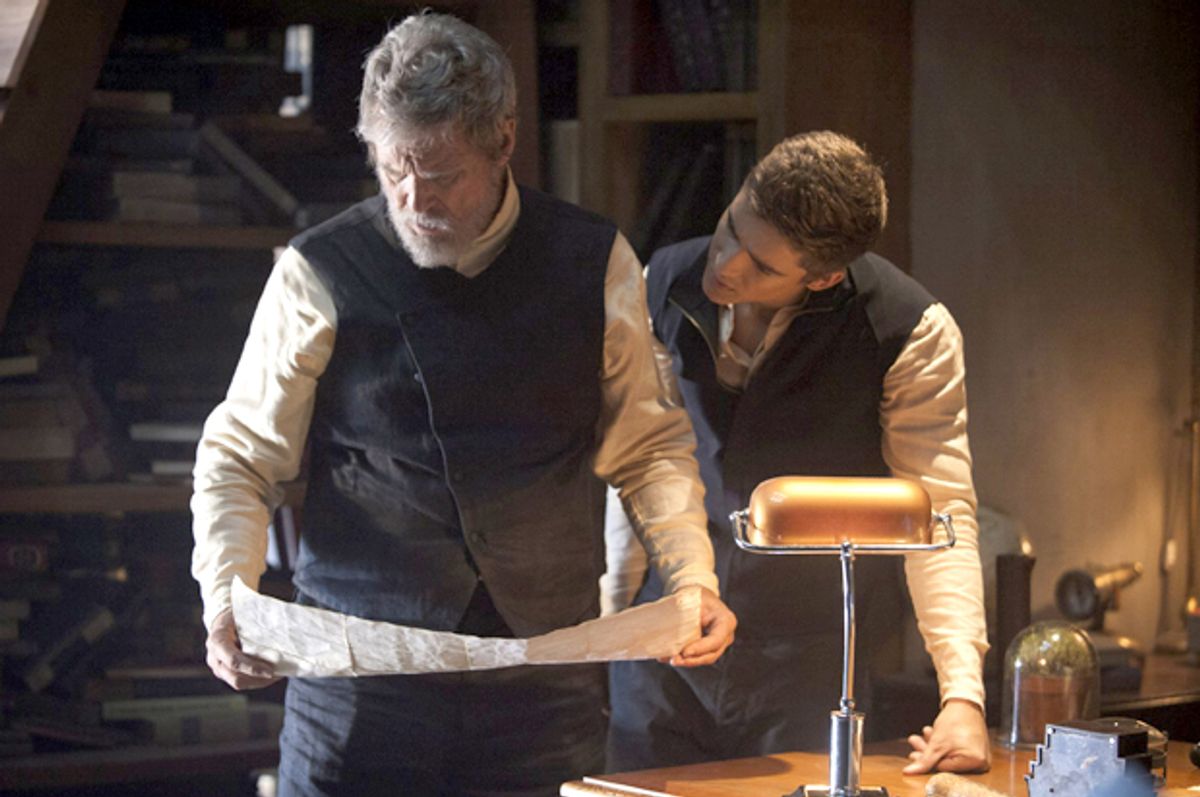 Jeff Bridges and Brenton Thwaites in "The Giver" (The Weinstein Company)
--

Lois Lowry’s dystopian novel “The Giver” has been profoundly influential since its first publication in 1993 – so much so that its initial impact has almost entirely dissipated. Lowry’s books belong more to the old category of children’s fiction, or what would today be classified as “9 to 12 novels,” rather than to the now-ubiquitous and deliberately ambiguous “young adult” zone. It’s probably fair to describe her as a transitional figure, partway between an older tradition of didactic science fiction aimed at young readers – Madeleine L’Engle and the underappreciated Sylvia Engdahl come to mind – and contemporary YA best-sellers like Suzanne Collins’ “Hunger Games” and Veronica Roth’s “Divergent.”

If Bill Cosby had produced a movie adaptation of “The Giver” soon after its publication, as he apparently intended, at least it would have stood a decent chance of becoming a major phenomenon. Instead we get a film of “The Giver” 20 years later, produced by star Jeff Bridges and directed by capable Hollywood vet Phillip Noyce (“Salt,” “The Quiet American”), as a late-summer cultural leftover, an apparent imitation of things Lowry’s book actually inspired. Roth’s “Divergent” series, in particular, shamelessly rips off its allegorical, post-apocalyptic world from “The Giver,” while remaining barely within the realm of plausible deniability. One could say, of course, that the concepts involved are more general and more philosophical, and go back much further. Lowry herself was borrowing a bit from Orwell, a bit more from Ray Bradbury’s “Fahrenheit 451” and Ursula K. Le Guin’s “The Dispossessed” (both science-fiction masterpieces) and a whole lot from Aldous Huxley’s “Brave New World.”

I don’t want to be a total downer about “The Giver,” which feels pure of heart by Hollywood standards and offers a relaxed and soulful performance by Bridges as the eponymous Giver, the only repository of cultural memory in an anodyne future society. This film is also a total underdog at this point, a relatively inexpensive production that has gone through reshoots and multiple delays and now gets dumped onto the market in one of the sleepiest weekends of the year. But the truth is that it’s dim, perfunctory and wide-eyed, at least in every moment when Bridges isn’t on the screen. Lowry’s story is full of logical loopholes to begin with, which have not been improved by screenwriters Michael Mitnick and Robert B. Weide, who make a vague, intermittent effort to turn this into an action movie. Gestures are made at connecting Lowry’s imaginary surveillance society to our world of drone warfare and NSA spybots, but they don’t add up to much.

Mitnick and Weide stick fairly close to Lowry’s text (beyond the injection of a little feeble teen romance), but that isn’t altogether a good thing. One of the problems with “The Giver,” if you want to put it this way, is that Lowry never makes much of a case for her totalitarian utopia. Color, music, weather, geography, history, emotion and all forms of sensual pleasure have apparently been eliminated in favor of a pharmaceutically controlled society of “sameness” that experiences no war or racism or inequality. As earlier critics of the novel have noted, this feels like a writerly contrivance cooked up to make an overly obvious point, and never like a plausible social construction. Bradbury, Collins and Roth all imagine future societies built around servicing the pleasure principle and other innate human qualities, whether or not they are salutary. Le Guin’s “Dispossessed” (easily the best of all these books) is an exceptionally nuanced political allegory about the failures of all totalizing systems, whether capitalism, socialism or anarchism, when faced with the varieties of human experience. Even her anarcho-syndicalist desert society, the moon of Anarres, takes some reluctant account of the biological need for play.

There’s some enjoyment to be found in the deadpan performances of Katie Holmes and Alexander Skarsgård as the brainwashed “parents” of Jonas, the teen hero played by young Australian actor Brenton Thwaites. I use quotation marks because they aren’t really his parents; babies are born in a lab and assigned to “family groups” later. Whenever Jonas makes some angsty teenage comment, one of them will say “Precision of language!” in a gentle but cautionary tone. He then apologizes and they beam, “Your apology is accepted!” Both bogus parents hold horrific jobs (as it turns out) in this suburban surveillance-state world, a cluster of fake vegetation and anonymous 1970s-style houses that looks like a rejected sketch from some second-rate follower of Le Corbusier. Jonas is 11 in the novel but 18 here, presumably to allow for some hints of passion with his classmate Fiona (the lovely Odeya Rush), in a society that doesn’t seem to permit any. (Unsurprisingly, we do not learn anything about sex in the community, including whether it ever happens.)

Thwaites is a handsome nonentity who gives no particular account of himself, but that might not be his fault, as Jonas is a paper-thin character. He has been selected by the society’s Chief Elder (Meryl Streep, in a performance that appears – not metaphorically! -- to have been phoned in by Skype) to be the community’s Receiver of Memories. This means spending a lot of time with the grizzled old current Receiver (Bridges), who lives alone in a house that literally overlooks the edge of the world, and who enjoys certain privileges forbidden to others: He owns a library of books, can play a little piano and can tell lies for the benefit of society. (I don’t know whether Lowry was expounding on the political philosophy of Leo Strauss, but it seems possible.) When Jonas sees a grand piano for the first time, with the lid raised, he exclaims: “That table! The food would all slide off!”

So the initial setup for the story is engaging enough, but Noyce and cinematographer Ross Emery have shot the whole thing in generic digital fake black-and-white, so it looks like a late-‘90s TV commercial for a soon-to-be-recalled compact car. Nothing Jonas learns from Bridges – there used to be fun, and also war – explains a single damn thing about how and why this Hermann Göring brain-fart of a future world came to be, and by the time we get to Jonas’ escape, everyone involved with this picture is visibly chafing for it to be over. And it’s pretty short! All I’ll say about the ending is that I thought it would turn out to be ironic or illusory until the final blackout (which is true to the spirit of Lowry’s novel at least), but instead of being those things it’s just a surrender.