I am emotionally exhausted. But it's time to tell the truth about the scary, enraging times this nation confronts 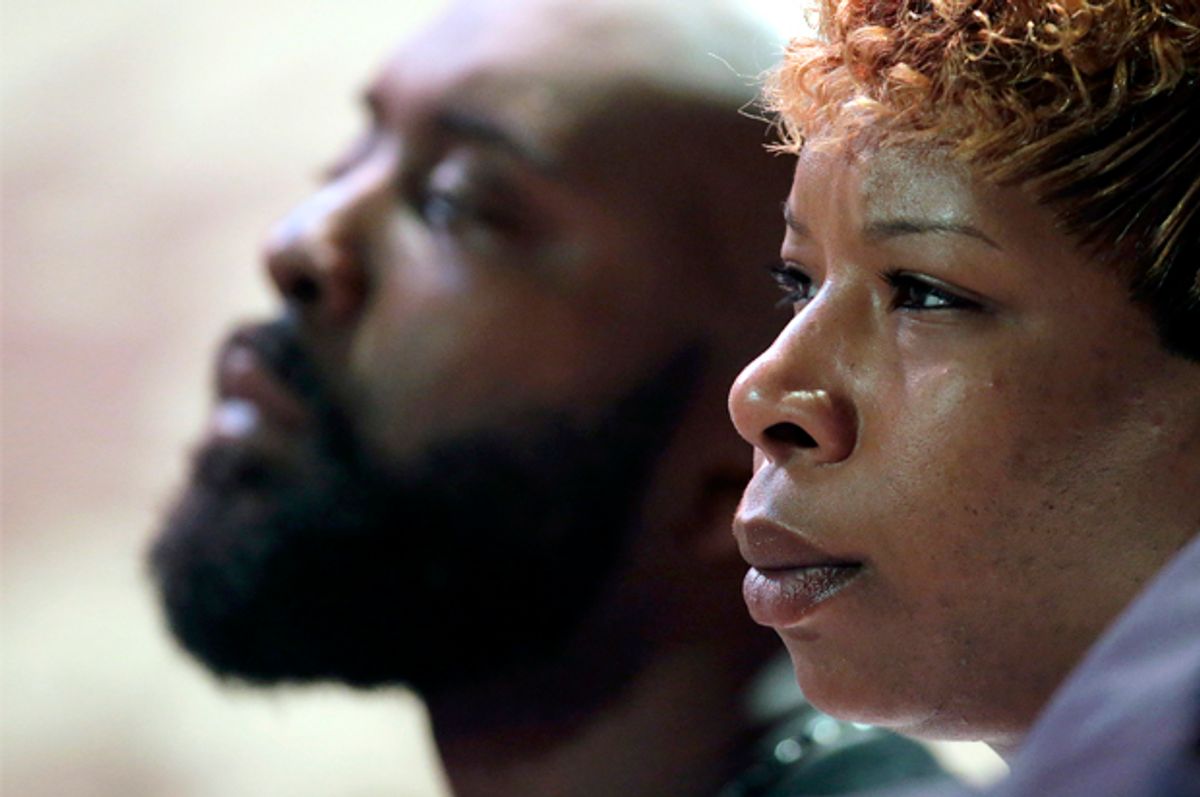 Six bullets. More than I can count on one hand. That is how many times preliminary autopsy reports indicate that Michael Brown was shot. Nothing about the youthful infraction of strolling down the middle of a residential street in one’s own neighborhood justifies having your life ripped away from you by an irate officer firing six bullets as you face him, hands up in surrender.

I cannot even fathom what Mike, “Big Mike” as his friends call him, felt as each of those bullets entered his flesh. I do know a little of the rage, despair, helplessness and hopelessness that black communities have been left to feel in the aftermath of his death. I know he stayed conscious long enough to put his hands up, to try and surrender, as if to say, “I want to live. Please don’t kill me.”

Ferguson residents and protesters now find themselves arms outstretched, palms up, yelling “don’t shoot,” as police officers in guns, gas masks and tanks occupy the streets of Ferguson, Missouri, dropping canisters of tear gas on our American dreams. Those of us not yet there in Ferguson watch helplessly as the images of at least one child being tear-gassed come through our Twitter feeds, as journalists find themselves facing down the barrel of a hastily drawn police weapon or thrown in jail, as police drop stun grenades on crowds that refuse to comply with the unreasonable demand that they relinquish their right to peaceful assembly.

While the world watches aghast, America’s penchant for exporting guns, tanks and destruction to other places in the name of law and order has shown up on our own doorsteps, in our backyards, with people pinned into parking lots and onto their porches. They are told they must stay where they are or risk being shot with rubber bullets or have their faces and lungs sting with the inhalation of tear gas.

Public space in Ferguson is awash in black tears, but it is the sirens that we hear wailing. The people would weep, but they are too busy running, ducking and taking cover from the angry sounds of a system that does not love them, does not care about their meager “rights.”

Meanwhile, the government attempts to placate the people with optical sleights of hand. Capt. Ron Johnson, by all accounts a sincere and affable leader and head of the highway patrol, replaced the police chief late last week, with promises that he would not employ military tactics to police the citizens of Ferguson. On Thursday I breathed a bit easier as we watched him giving hugs to protesters, marching with the people, allowing black women of faith to lay hands on him and pray.

That peace was short-lived after the Ferguson police inflamed crowds by releasing irrelevant footage of a conflict that Michael Brown had at a local convenience store when he and his friend Dorian went to buy Cigarellos. Late that evening the crowds returned, only to be met by more tanks, more tear gas, more guns.

Beyond shock, I continue to be appalled at the extensive lengths to which the police have gone to protect Officer Darren Wilson and his family from any public reproach or reprisal in Mike’s death. They delayed the release of his name in order to provide him enough time to leave town. They then released his name to coincide with video of the Cigarello incident, which they later admitted he knew nothing about when he stopped Mike. It is clear that the police are closing ranks, showing that they value the lives of their own more than the lives of citizens.

We are told repeatedly that police are worthy of our respect because they risk their lives each day to protect us.  That is not the case for black people. When we encounter police, our lives are at risk while they protect themselves. I started to temper my statement by saying “some police,” but that gives the impression that I am speaking of the actions of a few rogue officers. The problem with this logic is that we now know that Ferguson law enforcement has a range of problems – disproportionate stops of black residents, disproportionately low numbers of black police (three out of over 50), and a history of antagonistic exchanges with the people of St. Louis County.

We have a problem of overzealous policing in this country. That problem is exacerbated by issues of race and gender, so that black men are perceived to be far more threatening than they actually are. And when black women encounter police, we are not given the protections generally afforded to white femininity. Our womanhood does not mitigate the threat of police force. This, then, is not about the actions of a rogue officer, but rather about the ideology of overpolicing that deputizes extrajudicial behavior as completely justified, as long as the life being taken or haphazardly handled is a black or brown life. Though the killing of Brown by Wilson seemingly fits a long historical script of the harassment of black people at the hands of white police officers, the reality is that overpolicing is an ideology that many police officers subscribe to regardless of color.

That ideology is rooted in a kind of anti-blackness that sees black bodies as a perpetual and mortal threat. Anti-black rhetoric has shown up not only from the Ferguson police but also ironically in the reporting and advocacy of everyone from CNN reporter Don Lemon to rapper Nelly, in their continued focus on issues like “black-on-black crime” and the necessity of keeping law and order. “Don’t use your last option, first,” Nelly told folks on St. Louis radio.  There is little recognition that it is Darren Wilson who used his last option – lethal force — first. Moreover, the whole point of using tear gas and military vehicles in this small community is to force the residents into a realization that they have run out of options. Sadly, anti-black ideology can emerge even from people who are black or who otherwise love black people.

I know Americans like to see themselves as a law and order people, but the few folks who have rioted and looted over the last few days, many of whom are reportedly not Ferguson residents, were stopped in their tracks by peaceful protesters. Even still their presence exposes an inconvenient truth. The killing of unarmed teenagers by police officers is lawlessness. It shows a lack of respect for the sanctity of life and the rule of law. The supreme irony is seeing folks defend the officer’s lawlessness while calling for people destroying property to respect the law.

As I keep saying, destruction of property is not particularly productive. But I refuse to direct my ire toward anyone but the officer who unjustly took Michael Brown’s life and the police establishment that is now complicit in this crime.

I am tired. Emotionally exhausted, actually. I am tired of going to sleep each night seeing a community of people who look like me under military siege. I’m tired of seeing crying black mothers – Sybrina Fulton, Lucia McBath and Leslie McSpadden —distraught over the loss of their teenage sons Trayvon, Jordan and Michael. I’m tired of hearing report after report of people under attack from tear gas. I’m tired of journalists being bullied for trying to tell the truth. I’m tired of explaining to white people why our anger is justified, why looting, which is a property crime, should not even be part of a conversation about the killing of a teenager, why the alleged shoplifting of cigarettes is not a capital offense, why the police officer who killed Mike for the crime of walking in the street is the real thug.

White racism and white privilege continue a bad cop-good cop routine with black America that is utterly exhausting. Just when we think we are making headway, a well-meaning white person asks “but can’t we condemn the looting too?” The question is: Have you condemned the killing? Or have you tried to explain it away? To justify it?

I will not engage in a condemnation quid pro quo with trolls, well-meaning white citizens or respectable black ones, “Brand New Negroes” I call them, in the tradition of the famous text from Harlem Renaissance philosopher Alain Locke. I will not concede that destruction of property is equal to the taking of life. I will not answer calls to be reasonable in the face of unreasonable, unjustifiable black death. I will not believe the lie that black propriety and respectability – pulling our pants up, speaking corporate English, never, ever doing anything wrong – will save us.

Ferguson exposes the extent to which American necropolitics shapes the terms and conditions of black life in what professor Sundiata Cha-Jua calls a new racial nadir. The first racial nadir happened from about 1890 to about 1930, when black people experienced the unprecedented loss of political gains hard won in the aftermath of the Civil War and the astronomical rise of lynching. We have indeed reached a new nadir in America’s racial life, one hard to fathom as a black president sits in the White House, abdicating his responsibility to speak forcefully and forthrightly to the problem of racism and military-style policing both for fear of being seen as too “black” and for fear of political reprisal from the right.

Meanwhile, our voting rights have been stripped away, our kids are being killed in the streets, their killers rarely convicted, and our communities are placed under siege. And our black president reminds us that "there are young black men who commit crime," though he feels no responsibility to say this about any other race of people. It's a shaming tactic that suggests that black people do not have the right to be angry when our communities are beset with so many problems. It is the kind of anti-black thinking that suggests "acting respectably" will save us.

These are scary times. They are times for rage. Time for telling the truth. Time for ripping the band-aids off our gaping wounds. Time to recognize that we can neither heal nor fix that which we will not confront.