Couple's therapy gone wrong: "The One I Love" and the creative starvation of American indie film 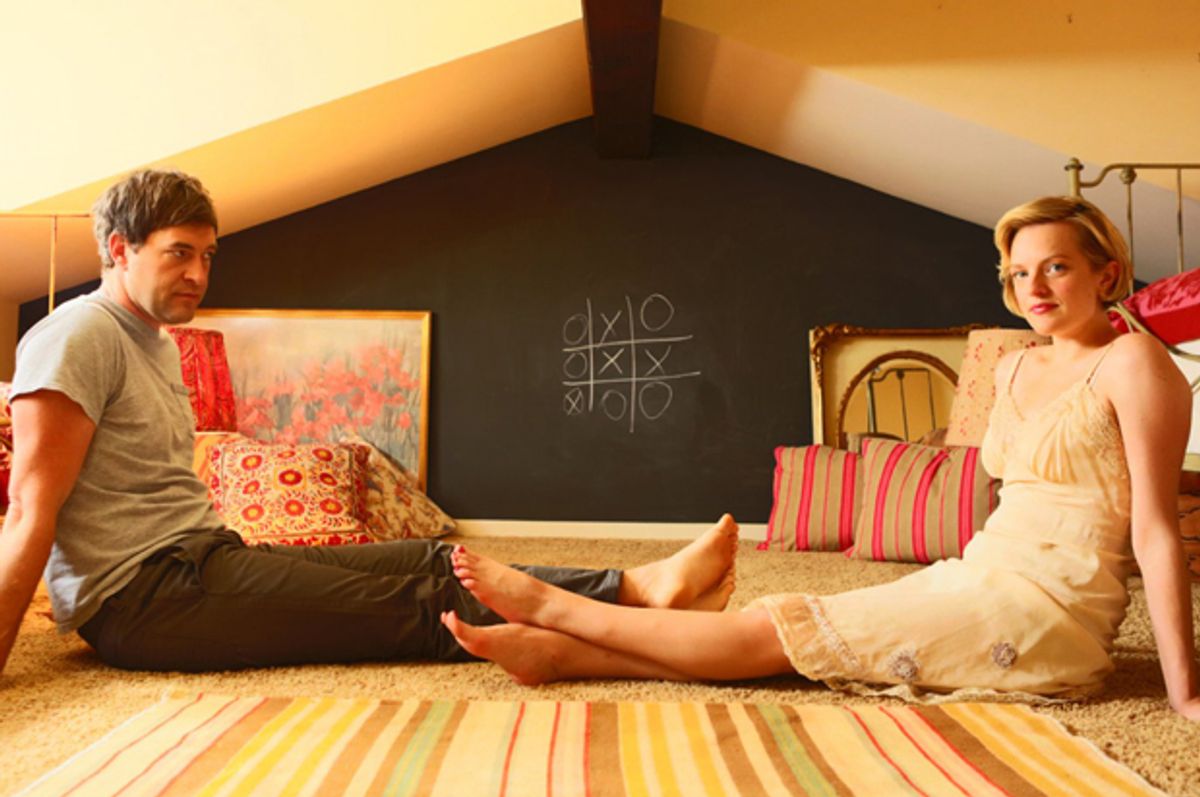 Mark Duplass and Elizabeth Moss in "The One I Love"
--

Here’s a tip to aspiring screenwriters: When you get to that clever, meta, self-referential moment when your characters describe their situation as a “Twilight Zone episode,” it might be nice if that weren’t wishful thinking. One of Rod Serling’s classic stinger-in-the-tail TV yarns represents the unattainable upside of “The One I Love,” a two-hander marriage drama built around witty performances by Elisabeth Moss of “Mad Men” and Mark Duplass of “The Mindy Project” and “The League.” This first-time effort for both director Charlie McDowell and writer Justin Lader developed modest buzz at Sundance last winter, which testifies more than anything else to the creative starvation of American independent film at the moment.

It’s not that “The One I Love” isn’t agreeable in patches. It starts out pretty well, with Ethan (Duplass) and Sophie (Moss) suffering through a painful therapy session with Ted Danson, perfectly cast as a faintly manipulative shrink. Ethan has had an affair, and while Sophie says she wants to forgive him and move on, she clearly hasn’t gotten over it and doesn’t trust him. Both characters are precisely captured: Ethan has the wounded pride of a guy who thinks he has done quite enough apologizing and now suspects he’ll never get anything right; Sophie has the prickly, passive-aggressive demeanor of a woman who’s searching for the guy she fell in love with but isn’t sure he still exists. Beneath the affable, nonjudgmental persona of Danson’s nameless therapist, you get the dim sense he’s pursuing his own agenda.

And so he is. After genially concluding that “you guys are really out of sync,” Danson sends Ethan and Sophie to a bucolic couple’s retreat somewhere in the verdant California exurbs. (Although the setting is never specific, this movie was shot on a shoestring budget in and around Los Angeles.) It’s a charming little cottage set among lush gardens and orange groves, and full of heartfelt testimonials from previous visitors about how their stay helped restart their relationship. And how does that work exactly? Well, I’m not supposed to tell you, which makes it extremely difficult to discuss what works and doesn’t work about “The One I Love” in any detail. This movie does not turn on some big revelation of a hidden fact that was there all along, after the fashion of “The Sixth Sense” or “The Crying Game.” It’s more like the basic premise of the plot, which Sophie and Ethan figure out inside the first half-hour, involves an inexplicable phenomenon that may be supernatural or may be a scientific aberration.

I will offer the following minor spoiler, with appropriate warning, by way of explaining where the fundamental limitations of this story lie. The grounds of the couple’s retreat also includes an adorable guesthouse, which appears to have no function, since Ethan and Sophie are the only people there. It takes just one night of unexplained events for them to figure out that the guesthouse has mysterious properties, and that whenever one of them enters it (without the other) he or she enters some kind of alternate reality. Ambitious commenters have suggested that Lader and McDowell are drawing on various influences, from the nested dream worlds of Christopher Nolan’s “Inception” to the consciousness-shifting planet of Andrei Tarkovsky’s “Solaris” to the competing realities of Jacques Rivette’s “Celine and Julie Go Boating” (which appears not to be legally available in North America in any form). To which I say that such a generous response is no doubt noble. But no. Whatever you think of those three wildly different movies, there’s a lot going on in them, both on the surface as works of visionary cinema and below the surface in terms of themes and ideas. “The One I Love” has nothing at all below the surface, and the surface itself isn’t especially interesting.

OK, that’s slightly unfair, but only slightly. There’s a metaphor at work here, one that’s embedded in the title: In any human relationship, we run the risk of becoming attached to a fictional version of a partner – maybe one who used to exist, or just our own fantasy projection – and ignoring the real person in front of us. Duplass and Moss are alternately charming and chilling (and also in acting-school mode, a little bit) in playing subtly varied versions of their characters, inside and outside the guesthouse. But once we grasp the obvious dynamic, that being that the guesthouse is some sort of wish-fulfillment machine (which distorts itself to benefit only one-half of each couple), we’re just waiting around while McDowell and Lader labor toward a “solution” to the “mystery,” which turns out to resemble the denouement of an unsuccessful Stephen King short story.

I normally wouldn’t bother writing a negative review of an inexpensive indie that is unlikely to reach a mass audience. There’s nothing disgraceful about “The One I Love,” and if you’re just in the mood for a VOD time-waster, you could do worse. But despite the agreeable lead performances, it doesn’t quite repay your 90 lost minutes of life. The only important unanswered question this movie left me with is the one about why it gets a big P.R. push from Harvey Weinstein while funnier, darker and far more accomplished low-budget genre movies like James Ward Byrkit’s “Coherence” (which has a strikingly similar premise), E.L. Katz’s “Cheap Thrills,” Jeremy Saulnier’s “Blue Ruin” or Alex van Warmerdam’s “Borgman” come and go almost unnoticed. Watch one of those instead.

”The One I Love” is now playing in Los Angeles, New York and San Francisco, with other cities to follow. It’s also available on-demand from cable, satellite and online providers, including Amazon, Google, iTunes, Vudu and YouTube.