Do it for Michael Brown and so many others. It's time to act on this moment of consensus and enact reform 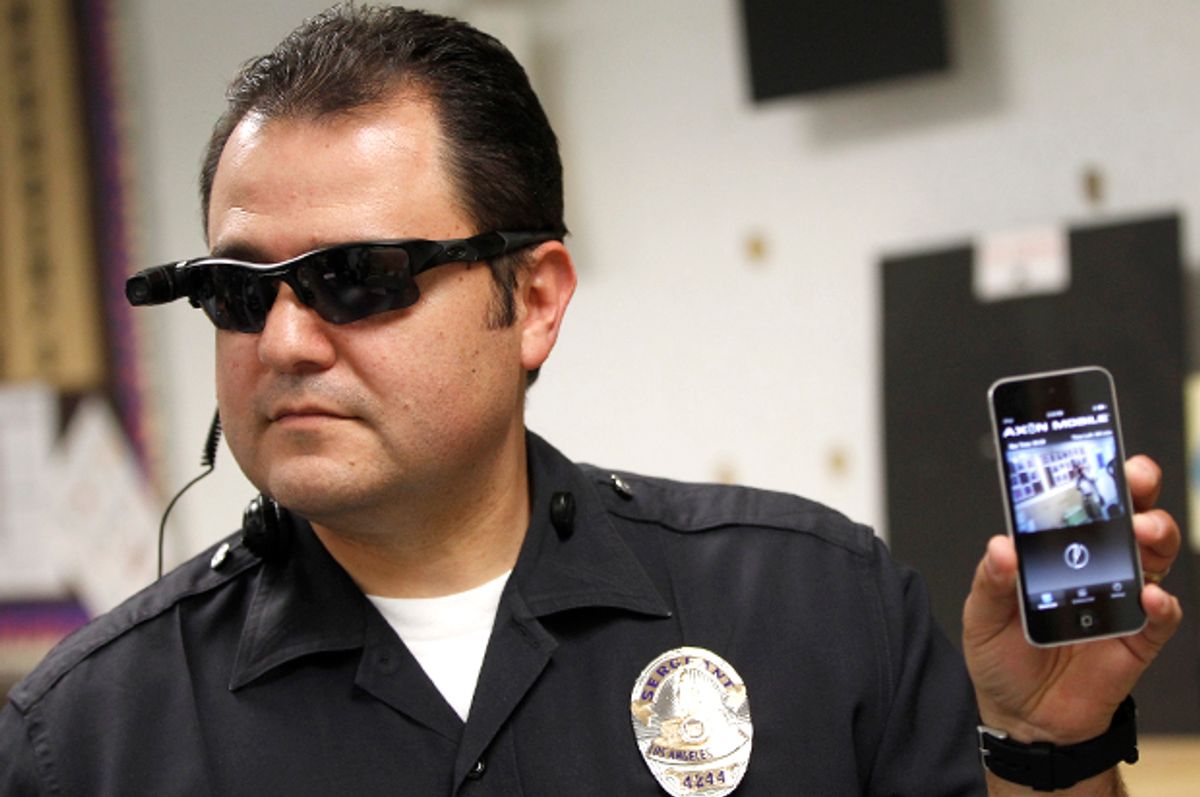 Los Angeles Police Sgt. Daniel Gomez demonstrates a video feed from his camera into his cellphone as on-body cameras are demonstrated for the media in Los Angeles, Jan. 15, 2014. (AP/Damian Dovarganes)
--

Under any circumstances, the death of 18-year-old Michael Brown would have been a senseless tragedy. Even if his biggest detractors were correct in their ugly perception of him, the drug-addled thief of their churlish fever dreams, his death at the tender age of 18 was horrible and unnecessary. And for the people of Ferguson, Missouri -- overwhelmingly minorities but policed by a group of men and women overwhelmingly white -- some measure of justice, a genuine attempt to right the wrong of his untimely death, would likely help start the long process of healing the deepest psychological wounds that his shooting has caused.

Unfortunately, standing in the way of that reckoning  -- beyond what looks like foot-dragging on the part of local and state officials -- is the fact that we'll never really know what happened that fateful afternoon. The alleged witnesses and Ferguson locals will have their story, and the police will have theirs, but there will be no final arbiter who can speak with unimpeachable authority about what transpired that day.

It didn't have to be this way. Locked away, the Ferguson police department is hoarding a stock of "body-worn cameras" (BWCs) that could have answered these questions before they ever arose. Only problem? The Ferguson P.D. "have yet to deploy them to officers," according to a recent article by Chris Mims of the Wall Street Journal. So rather than having an honest reckoning with the events of that tragic afternoon, we're left to simply wonder, and to wish.

The notion that all cops should be required to wear cameras is surely having its moment. It's been endorsed far and wide: by the Washington Post's editorial board, by the ACLU, and even the International Association for Chiefs of Police (IACP), whose president was quoted in a press release this past June stating that "it is imperative that law enforcement agencies create and enforce comprehensive policies governing the deployment and use of BWCs." Last year, U.S. District Court Judge Shira Scheindlin declared New York's "stop and frisk" program unconstitutional; in the process, she required that New York City adopt a one year "pilot project" to study the use of BWCs, with a focus on the precincts with the highest number of community complaints. And last week, a "J.C." from Hephziba, Georgia, created a whitehouse.gov petition calling for a "Mike Brown Law," which would require all police officers nationwide to wear cameras. As of this writing, the petition has already gained more than 130,000 signatures.

Would BWCs be a panacea to America's problem of police brutality and abuse? Of course not. And the potential problems abound. How will they be deployed? Who will have access to video -- will the press or local citizens? Who will determine when they're turned on (and when they're not)? What happens when they malfunction, or "malfunction"? And crucially, who will pay for them?  And yet, surprisingly, many of the groups that typically raise alarms about government programs such as this one are couching their concerns in a cautious optimism.

To better understand why, I spoke with Chris Rickerd, policy counsel for the ACLU. Rickerds notes that, while "the ACLU are not in the habit of promoting government surveillance," they see this program -- properly implemented -- in a positive light. "It can be such a win-win -- in terms of exonerating an officer who's falsely accused, and also providing the oversight." And the ACLU also sees "positive momentum" that is pushing this issue to the fore. But Rickers cautions that the way we implement body-worn cameras on cops must be "contextualized in the framework of a policy regime that makes sure privacy interests are respected in the process, and there isn't the veneer of the cameras being there, but in fact not helping in terms of oversight and accountability."

Framing this recent groundswell of support is a spate of new studies that seem to show the profound, transformational effect that body-worn cameras can have on police/community relations -- drastically reducing officers' use of force while also shrinking the number of citizens' complaints.

The most famous of these studies comes out of Rialto, California, and produced results that even the local administrators found shocking; in the first year, with only half the police force wearing the cameras, department-wide use of force decreased 60 percent, while complaints against officers dropped almost 90 percent. These results are encouraging for both citizens and police alike, and they could also help demolish a major roadblock to implementing BWCs more widely: namely, the technology's high cost. The most common units are sold by Taser -- whose stock has risen roughly 30 percent since Ferguson became a national story -- and range from $200 to $400 each. And that doesn't include the monthly cost of digital storage for the tens of thousands of videos that quickly accrue. But if police departments larger than Rialto's can expect a decrease in complaints anywhere near what that small town experienced -- along with a drop in the legal settlements that often follow --  the program would quickly pay for itself. As Tim Cushing notes at the technology blog TechDirt,

"The cost [of purchasing BWC's] for the entire NYPD is only one-fifth of one year's settlements. If the cameras are only half as effective as they were in Rialto in terms of reducing complaints, the corresponding savings in settlements should be enough to buy every cop in the city a new body cam every year."

Settlement costs are a major budget problem for large police departments across the country; in NYC, they devoured nearly a billion dollars from 2000 to 2010. In Oakland, just 417 police brutality settlements have cost taxpayers $74 million in the past 20-plus years. (And requiring police to carry "malpractice" insurance like doctors is another good idea whose time has come, but that's another issue for another day.) The point here is that no one should want the police to use force in any circumstance, just as no one should want their tax dollars funneled to pay for the legal fees of crappy, abusive cops. Better, then, to avoid the excessive force and subsequent lawsuit altogether. After all, when use of force dropped by 60 percent in Rialto, were its citizens 60 percent less safe? Was justice meted out 60 percent less effectively?

Other questions remain. When should the cameras be turned on in the first place? It seems easy to say "always," but beyond the practical difficulties (battery life, file size), there are civil libertarian issues that get in the way. As a recent ACLU white paper explains,

Purely from an accountability perspective, the ideal policy for body-worn cameras would be for continuous recording throughout a police officer's shift, eliminating any possibility that an officer could evade the recording of abuses committed on duty. Of course, just as body cameras can invade the privacy of many innocent citizens, continuous deployment would similarly impinge on police officers when they are sitting in a station house or patrol car shooting the breeze — getting to know each other as humans, discussing precinct politics, etc. We have some sympathy for police on this; continuous recording might feel as stressful and oppressive in those situations as it would for any employee subject to constant recording by their supervisor. True, police officers with their extraordinary powers are not regular employees, and in theory officers' privacy, like citizens', could be protected by appropriate policies (as outlined below) that ensure that 99% of video would be deleted in relatively short order without ever being reviewed. But on a psychological level, such assurances are rarely enough. There is also the danger that the technology would be misused by police supervisors against whistleblowers or union activists — for example, by scrutinizing video records to find minor violations to use against an officer.

The other major problem is the human element. At the Atlantic's CityLab, Sara Libby spoke with San Diego State professor Joshua Chanin, who notes that we already have cameras watching a lot of cops -- in the form of "dashcams." But despite their prevalence, the effectiveness of these cameras can easily be compromised. As Chanin explains, "There are enough instances of cameras 'not working,' footage having gone missing, cops 'forgetting' to turn them on, etc., that rules in place to punish officers who tamper with cameras, erase video are perhaps the most important part of the equation."

Others have questioned how long we should maintain the videos that cops record: Delete them too fast, and you risk accidentally destroying crucial evidence. Save them for too long, and you risk giving police the opportunity to go back over previous videos, trawling for lawbreakers or suspicious activity.

When considering the rise of body-worn cameras, important questions around the circumstances of their use -- and potential for abuse -- must be considered now. Their "win-win" nature  -- along with the increasing prevalence and acceptance of cameras in our society (not to mention the ugly profit motive of companies like Taser) -- means it's increasingly likely that in the next decade or two, it will be near impossible to find an American cop who isn't wearing a camera on his lapel. Best to be ready, with the thorny questions surrounding this innovation already carefully considered -- ideally, by the citizenry who will fall under its watchful, constant gaze.